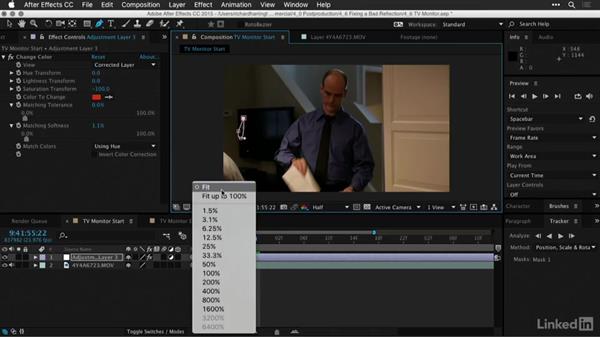 - Sometimes when you're shooting, little things happen. Like a bad reflection. It's pretty easy when you're focusing on your actors plus technical things, to miss little things on set. And this could lead to having to fix it in post. Let's take a look at a particular shot. In this case, you'll see that a red recording light, a tally light off of one of the behind the scenes cameras actually, is reflected on the monitor. It wasn't there originally and it shouldn't have been there at all, but unfortunately, it is and it's a bit distracting.

But it's pretty easy to get rid of. Now, taking a shot into After Effects is pretty simple. It makes it easy to actually do a quick fix and take advantage of things like masks and adjustments. So in this case, I've added an adjustment layer to remove that color and pull it out while leaving everything else unchanged. Alright, let me build this for ya. Start with the one called TV Monitor Start, and in this case, add a new adjustment layer.

Adjustment layers can hold effects. Now, with the adjustment layer selected, I'll choose Effect, Color Correction, Change Color. This allows me to target one color and turn it into another. Let's zoom in here a little bit to make this easier to see. If you hold down the space bar, you can drag in the window, and we're targeting this red reflection.

Now, I'll take the eyedropper and select that red. If you wanna see what's being selected, you could target the color correction mask to see it. I recommend playing with which adjustment method you use, in this case, hue is a little more narrow, but we need to reduce the overall tolerance so it's not so aggressive and soften things just a little.

With that selected now, I'll zoom back out and you'll see that too much is selected but that's okay. We can refine this color a little bit and try to get a more narrow selection by adjusting the red and it's intensity, you see that that updates on screen. Now that's okay, it's being too aggressive and affecting the skin tones but we can narrow that down.

What we'll do is switch this back to the corrected layer and simply pull down the saturation. Now the reds lose their color, including the skin tone, but that's okay. We can take the Pen Tool here and simply make a selection around that target. Let's zoom in a little bit and what I'm trying to do is make a good loose selection around the affected area.

You can grab those handles and pull. There we go. And remember, you have the Mask Feather Tool as well. It's located here under the Pen Tool, and this makes it easy to create a softer selection. Now that selection is isolated to just this area. Well if we look at that and punch back out, you'll see that that worked quite well, just that area has been desaturated.

In fact, we can even transform that a little bit so it gets darker and you see it gets rid of the bright spot on the screen. And that's perfect, until the shot starts to move. As the camera begins to pan around, eventually the mask is no longer in the right spot. But that's okay. You can take the mask here and select it and now simply key frame it. If you look at the mask here, you can turn on Mask Path.

Now drag the play head forward, and we can simply add a key frame. Pressing command T, will invoke free transform and makes it easy to move. Select the mask, command T, and drag it back into place, and let's see if that moves well. Looks good. Command T, and I'm just keeping it over the problem spot.

Command T, there we go. Alright, let's watch that back. You'll notice that that worked quite well. I was able to target with the change color effect the spot on the screen. Let's turn that off for a second. You can see there, with the adjustment layer off, there's the red dot. But now, it's pulled that red and targeted it and then desaturated it and made it darker.

That eliminates the spot. The only tricky part was adding the layer mask which, with a simple key frame, can move to follow the action. This prevents the effect from spilling onto the actor's skin tones and it makes for a believable shot. While it's a simple little fix, it does make it easy to target a problem. You can now render from After Effects to create a new movie, or, if you took advantage of Dynamic Link, simply save this project and it would return to Premiere Pro.

Remember, check out some of the Premiere Pro and After Effects training available here in the online library to learn more about using Dynamic Link as well as well as rendering.