Exploring the "rules" of continuity editing 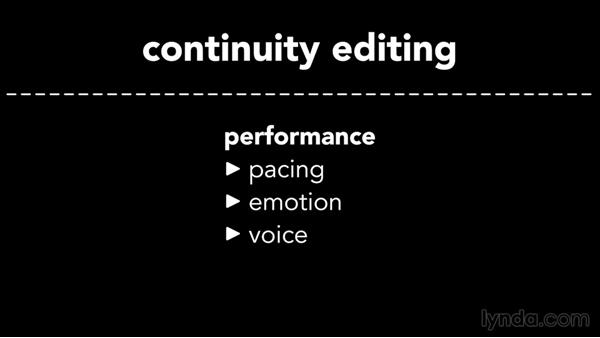 - In this movie, we're going to examine some basic editing rules, not only so we can follow them while editing conventional scenes, but also so we can break them when we need to. As we've seen in the previous movie, understanding how shot composition works to affect people's thoughts and emotions is important. And knowing when to incorporate camera and lens movement is a great way to make sure our audience gets good information and proper understanding throughout the scene. During all of this, however, it's also useful to be aware of some basic editing rules that help us depict this reality.

When we talk about many of these rules, we'll primarily be talking about working within the context of continuity editing. Continuity editing simply allows editors to reconstruct reality from all of the various shots gathered during the coverage shooting process. Its goal is to make sure that all of the hard work we're doing to construct the scene actually results in making the edits as invisible as possible. Let's take a look. Now, there are several elements within continuity editing that are important to consider.

First of all, continuity of mise en scène. Mise en scène is the French phrase that means put on stage. In the film world, this stage is metaphor for the video frame. As Martin Scorsese has said, "Cinema is a matter of what's in the frame "and what's not in the frame." So, this simply means that when you edit two shots together, you need to make sure that the content within the frame, that is what the audience sees, matches appropriately from one shot to another. We need to be sure that the position of the subjects as well as everything within the environment of the frame are similar enough to look like they can come from the same moment.

Same goes for all costumes, props, and other objects and even lighting. This is often easier said than done when you're trying to edit together moments that were actually not shot at the same time. But, it's up to you as the editor to execute proper continuity of mise en scène. You've also gotta maintain continuity of performance in terms of the way your subject speak and act. This involves matching pacing and emotional range. You do not want to cut from the medium shot when the actor or subject is all fired up to the close up where he or she is more subdued.

You even need to watch the way the voice sounds regardless of emotion. The vocal spectrum of the human voice is very wide and consistency can vary during times of the day and between different days. Just be aware that you need to carefully consider continuity in the way that people deliver their lines of dialog. Continuity of spatial orientation is more commonly referred to as the 180 degree rule. Which means you need to be aware of how objects are oriented in the frame from shot to shot. In each setup, there is an axis of action.

This rule simply means that during editing, the camera that recorded the scene must stay on one side of the axis of action. This means that if the subject is facing from left to right in the long shot, you can't suddenly switch to a shot of him facing from right to left on the medium shot. It can confuses the viewer and if you switch back and forth, it's very unsettling. The next two rules are about when to make the cut to make the edits as invisible as possible. First, the 20 mm/30 degree rule means that when you cut from one shot to another, you need to vary the two shots by a focal length of at least 20 mm and by 30 degrees.

I know we're just beginning and I'm already throwing confusing numbers at you. But, this basically just means that you need to cut between shots that are different enough in size and in angle. That will hide the edit enough to cut between shots. So, you can't cut between shots that are too similar, it will feel like a jump cut and will be jarring. You need to make sure to edit a different enough shot between similar shots. Finally, you wanna make sure to cut on action as much as possible. This just means that when a subject begins an action in one shot,you wanna try to make sure he or she finishes the action in the next shot.

This, too, is a really great technique to hide the edit. If you instead cut when the subject is perfectly still, the edit is more detectable. Take a look at this edit here where I haven't cut on action and I've cut every time Jo Michel is perfectly still and you can better easily pick out the edits, which is not what we want. Compare that to this cut where I've matched on action every time. So as he moves, I make the edit, and the edits end up being more invisible. So, as you can see, there's a lot to keep track of in order to make your edits seamless and as invisible as possible.

And as I said earlier, these rules are great to know so that you can either follow them to create a viable reality or break them when you need to.