Exchanging footage and LUTs with After Effects 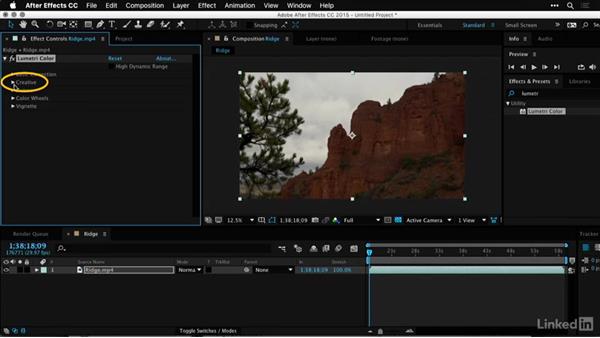 Not only can you create Looks and Lookup Tables, or LUTs, and collaborate with colleagues in an Adobe Premiere Pro environment, you can do the same with Adobe After Effects. What does the workflow look like with After Effects? Author Richard Harrington demonstrates how to send a shot to After Effects so you can adjust the LUt there.

- Now you've seen me create a look and a LUT, and make it easy to collaborate within a Premiere Pro environment, but how 'bout Adobe After Effects. Fortunately, the lumetri effect is now pretty easy. Let's go ahead and grab one more piece of footage here, this ridge, and drop it into a new sequence. In this case, I've got a shot of the Sedona desert, and I'd like to stylize this a bit. Using an input LUT, I'm gonna toss on that cinema LUT from Sony.

It's a little strong, so let's try one of the more standard REC 709 ones. That looks good, the sky looks a bit better. I'll recover that sky with the highlight slider, and lift the shadows just a bit. That looks pretty good, and that's looking pretty solid except I'd like to do a little bit of secondary correction. I think that the reds are just a tad bright. So, let's expand that out to select the red region.

And, using the correction, here, I'm just gonna de-saturate that area slightly, so the reds aren't quite as intense, But, we'll sharpen those a bit to bring out the details in the rock. Alright, that looks good, and for a little bit of style, let's put a small vignette on the edge. Alright, I'd now like to send this to After Effects. Remember, you have a wide range of doing this. One of the easiest ways is to right click, and replace something with an After Effects composition.

This will then launch Adobe After Effects, and move the clip over. Let's start by deleting the effect, and apply the lumetri color effect. You'll note there that when you apply that color effect, that you do have similar controls to Premiere Pro. For example, you can browse, and navigate, and choose the look or the cube file, and that will translate most of that over. The cube file will not translate as many choices as the look file, but you can explore each one, and see what works nicely.

This is a great way to collaborate if you want to give an After Effects artist some additional workflows. Besides the lumetri color effect, though, there is also an apply color LUT effect that's a bit older. This effect is not gonna be as versatile, but you'll see that it gives you the ability to choose a LUT, and it applies it. What's great about this effect is that it will force the LUT to be applied without any adjustment controls. This means that it's very much just a simple apply.

This is great if you want the After Effects artist to be absolute, and work with the exact LUT that you gave them. On the other hand, if you decide that they need some flexibility, working with the lumetri effect is gonna give you that. When they apply it, they can then choose to apply it as a creative LUT, and then by grabbing that and applying, you'll see that they get the same intensity slider that you have allowing them to increase the effect or back it off on a shot by shot basis to dial it in.

It really comes down to how much control you need. Fortunately, After Effects now has support for both lumetri and LUTs. If you're working with someone who's using an older version of After Effects, then you'll need to stick with the apply color LUT effect, and that will allow you to use the standardized LUT formats. On the other hand, if you're both using more recent versions of Adobe Creative Cloud apps, you'll be able to stick with the lumetri effect, and encapsulate more things into that effect. Just save off a look preset, and give them that.

Or take advantage of dynamic link, if you're working on the same system.

8/19/2016
Lookup tables (LUTs) and look files provide precise formulas for color correction. You can recover details, shadows, and highlights and match specific color spaces, and easily share settings with colleagues. So how do LUTs and looks complement your workflow? In this course, author Richard Harrington walks you through what LUTs and looks are, how they save time, how they make collaboration with others easier, and how to use them in Adobe Premiere Pro. Learn how to apply corrective and creative color corrections, build your own custom LUTs, and share LUTs between other Creative Cloud applications and third-party software. Rich also shows how to manage LUTs in Premiere Pro and exchange LUTs with After Effects.
Topics include:

Video: Exchanging footage and LUTs with After Effects