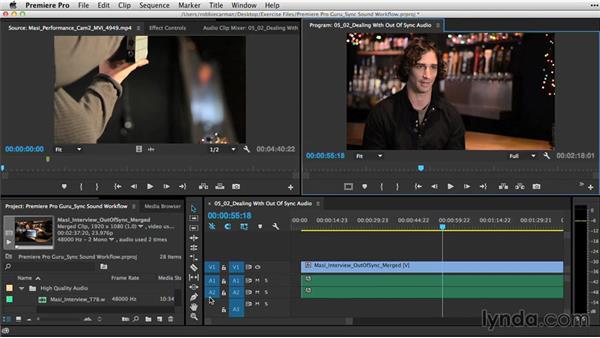 - So, now you know how to identify sync points, you know how to syncrhonize and merge clips, but you know what, you don't always do it right every single time. If you're anything like me, from time to time, you make mistakes when it comes to merging clips. Sometimes, I'm just not paying attention, other times I'm thinking about my kids, or what I have to do tomorrow, and when it comes to merging clips, yeah, I wasn't frame accurate, and the next thing I know, I have a clip on a timeline, where things don't kind of seem I don't know, in sync, and I want to be able to fix that, and that's exactly what we're going to talk about in this movie.

Here in this project, I have a timeline open called 05-02, dealing with out of sync audio. And, if you're looking for this clip, it's actually over here in the project panel, in this folder right here called other, and the name of the clip is Massey Interview Out of Sync. That's right, I purposely engineered this clip to be out of sync, but I did it on purpose so we could see how we fix a clip when we've merged it and it's still out of sync. Let's make the program monitor a little bigger, and let's find a section of this clip where Jason is talking, that's Jason Massey, our interview subject, go ahead and hit play.

You will drive yourself bonkers trying to identify whether something is in sync of out of sync. Don't just sit there and stare at the computer screen or at your video monitor for hours on end, trying to determine if something is in sync. Do yourself a favor, ask somebody else to come in to the room and check it out for themselves. Additionally, what you're going to want to look for is, sort of, lips making contact with each other, that's a great place to see if you have sync, or, in this case, as we'll see in just a moment, we actually have a sync point.

So let me back out of this for a second, and what I'm going to do is make my timeline just a little bigger, I'm going to move this down a little bit, and I'm going to drag out here, so we can go all the way back to the beginning, and let's see what we have here if I play from where the slate is. - Second mark... (beeping) - Did you notice that it just was ever so slightly -- - Second mark...(beeps) - Just a little bit off, I saw the beep, I saw it, but I didn't actually hear it until maybe a few frames later, so I think we're out of sync here.

So here's what I'm going to do to fix this. First, I can option click on just the audio just like that, or what I can do is go ahead and click this button to turn off link selection, which I think is a better option for what I'm going to do, and then I'm going to select this audio, and then I'm going to use the command and then the left and right arrows to nudge this audio. Now, on these clips, you'll notice that I have these little flags that are saying, "Hey, you know what? "Your audio is three frames out of sync with your video." That's because, when I originally created the merge clip, Premiere Pro thought, hey, this frame goes with this frame.

And now that I'm moving them, I'm forcing them out of sync. Now, it's a preference whether you want to have these flags displayed for unlinked clips or not, but right now, I like the default behavior of showing these out of sync flags. And I don't think three frames is going to do it. I'm going to command and left arrow a couple more frames, let's see what seven frames does, let's come up here, we'll make our program monitor a little bigger. Let's get to where he's talking. - Sometimes, a lot of times I kind of fall back to a lot of the old soul artists like Marvin Gaye and Allen Green, Bill Withers -- - That looks a lot better to my eye.

Let's go back up to the beginning, and let's play the slate. - Second mark... (beeps) - And you can see, that is spot on. So, the moral of the story here is that after you go ahead and merge clips, if you have some soft sync, you can turn off the link selection button, which is just right here on the timeline, or you can use the option key, and then you can nudge your audio left or right until you get that audio in sync. Again, you want to pay attention to things like lips coming together, or, if you're lucky like I have on this shot, use your slate and that audible beep to make sure that things are lining up.

10/30/2014
With cinema-style cameras and multicamera workflows, production teams often need to record audio separately from the camera. But how do you bring audio and video assets together in post? Premiere Pro offers several built-in options that make syncing audio and video easier, and there are powerful third-party tools like PluralEyes that make your workflow even faster. This course, with Premiere Pro guru Robbie Carman, will help you save time and get the best results, even when syncing multiple camera angles to a single audio track.
Topics include: