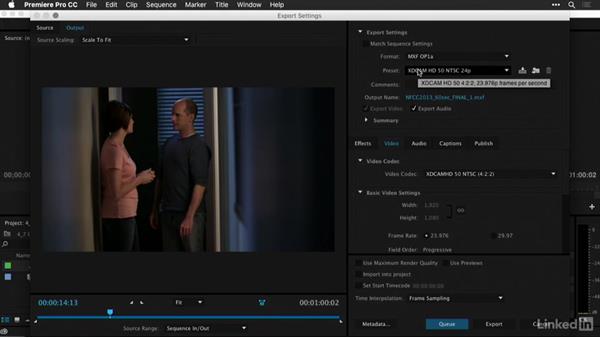 - Let's take a moment to talk about final delivery.…Now, I can't give you all the raw media, so I've made…a high-quality self-contained file that you…can practice with.…This self-contained movie is essentially a loss-less…quality mix-down of the original.…But you can open up any project you have,…or just pretend this was the original edited timeline.…There's a couple of different delivery types…that we're going to make here.…In Premiere Pro, you have the ability to choose file,…export, media.…

This will allow you to make a file directly,…or queue it up into Adobe Media Encoder…to render in the background.…Let's talk a little bit about what you're going to export.…If you just want to spit something out that matches…the quality of your sequence settings, you could choose…to match the sequence settings.…And that's a quick way to create a new file…that loses very little quality, provided that…your sequence was set up with a high-quality…master codec.…Additionally, you could choose to specify what's made.…

So a standard broadcast format these days…