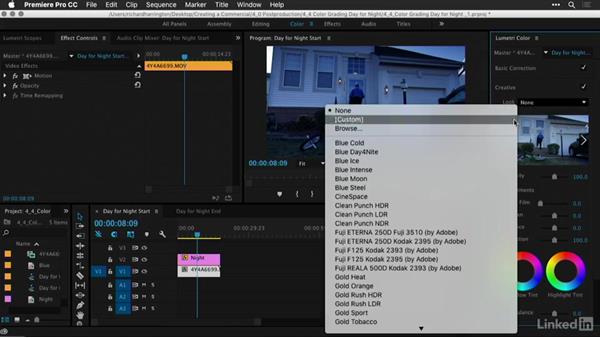 Depending on the schedule of your production, you might have multiple shots that need to be converted from daytime to nighttime. Sometimes, you may even have a clip shot outside. How do convert footage shot during the day to night in Adobe Premiere Pro? In this movie, author Richard Harrington walks you through how to make a day to night conversion in Premiere Pro that you will use for a commercial.

- A Day4Night conversion is a very typical…type of shot to perform in video production.…Shooting at nighttime can be more expensive,…just because of the time of day,…and more challenging due to the lower light situations.…What often happens is we shoot slightly underexposed,…or at later in the day,…but then use color grading and other tools…to push it that much further.…Let me show ya.…In this Premier Pro project, I've brought in…just a single shot.…This is shot at about five o'clock.…And with the white balance,…it definitely looks later in the day.…

But I'd like to push it even later so it feels at night.…You'll notice that we did turn on the house lights…to help push, and make it look, later at night.…These are the little things that you wanna do on location…to make it look a little bit more plausible.…Don't think it's a nighttime shot,…but forget to turn on your night lights.…So here's what I'm gonna try to do.…Push it to something that looks a little bit more like this.…This definitely feels later in the evening.…