Changing speed and reversing a clip 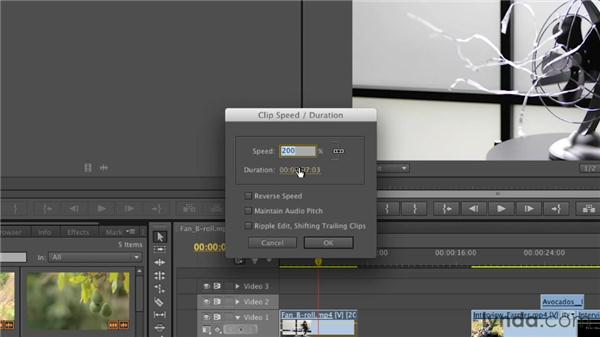 In this chapter we are going to look at changing the speed of video as well as even reversing video. So I have already placed two clips on our Timeline for us to work with, and the first one is simply a fan blowing, but it's a great example to show you how you can speed up or slow down the motion of a clip. I'll go ahead and press the Spacebar and play it at normal speed for a few seconds just so you can see what it looks like. And it's pretty standard, so if I slowed it down a little bit, you wouldn't notice it, but let's go ahead and slow it down dramatically.

Now, one of the ways you can slow down a clip is simply right-clicking on it in the Timeline and selecting the Speed and Duration option. This brings up a dialog box which allows you to choose what speed you want it to be. So for instance, I can say I want this to be 50% speed, which means I am going to be slowing it down, or I could say I want a 200% speed, which means I am going to be speeding it up. I am going to ahead and press in 50%, and I want you to take a look at what happens to the clip in the Timeline.

It actually slowed down the clip, but it didn't push any of the other clips out of the way or overwrite the content. And this is a great feature because a lot of times when you slow down a clip, you don't want to mess up everything behind it. It just took advantage of the empty space or the gap that was available. I am going to go ahead and hit the Spacebar and play it back, and you can see that this clip is now playing at a much slower speed. Now, I am going to go ahead and undo this Command+Z, or Ctrl+Z on Windows, so you can see what happens if I actually sped up the clip by going to 200%.

This time, instead of actually selecting the clip in the Timeline and right-clicking, I am going to show that you can go to the Clip dropdown menu, and there is an option for Speed/Duration, and there is also a keyboard shortcut. On the Macintosh that's Command+R. In Windows that would be Ctrl+R. By selecting Speed/Duration here, I get the exact same dialog box. So once again, it's six of one, one half dozen of the other, depending on where your mouse is you can use either, or the keyboard shortcut may even be faster. So now instead of slowing it down to 50%, I am going to go ahead and speed it up to 200%.

As you see, the clip seems to have gotten half as long, and that's because, well, we're going to go through this media twice as fast, and this is how it would look. So speeding up and slowing down is pretty easy. I am going to go ahead and hit Command+R this time to get back to the same dialog box on this clip. And as you see, there is my 200%, and I can modify this if I wanted to. But I just want to really point out a couple of key things that you can do in addition to just choosing a percentage.

If I wanted to I could actually type in a Duration, and because the Duration is locked to the Speed, it will automatically calculate that. So for instance, if I wanted this clip to be exactly 10 seconds long, I really didn't care whether it was 87.5% or 92% Speed, and I could go ahead and use the slider and just move that to be exactly a 10-second clip. And as you see, it's an arbitrary 144... The other thing I can do is I can try to Maintain Audio Pitch.

Now, in the clip we are working on--which is a fan--it really isn't quite necessary. As a matter of fact, I'd probably delete the audio. But you might be in a situation where you wanted to slow something down, and there are voices. And in that case, you can click and it will try to Maintain the Audio Pitch, because as you speed something up it gets higher, or as you slow something down it sounds lower. If you are going to do dramatic speed changes, this really won't work, but if you are taking something from, say, 22 seconds long to 24 seconds long, you can make sure that the voice quality of the speaker is maintained.

The button here which says Ripple Edit, Shifting Trailing Clips, this is really useful, because remember, when I slowed that clip down, as soon as it hit the next clip it stopped. If I wanted to actually push the clips further down the Timeline, which is more the exception than the rule, which is why the default is checked off, I could go ahead and click on this, and I am going to go ahead and change this to 30% and take a look what happens in my Timeline. My clip got longer, and if I go ahead and press the Backslash key, you see what it did, it actually pushed everything downstream and even maintained the gap.

So depending on what you need to happen, selecting or not selecting that ripple box is important. Now that you have a good grasp on speeding up and slowing down a clip, I want to show you another great feature, which is reversing a clip. And reversing a clip, the first thing that comes to mind is people going, oh yeah, we'll do something silly, people would be walking backwards or riding bikes backwards. Actually that's not what it's all about. It's sometimes fixing a problem in post. We have this great example here where the farmer is speaking about his avocados, and when it was shot I have a rack focus, but it's the wrong way.

Let me go ahead and play it for you, and you can see why. (video playing) So we're going from the avocados to the background, and really what would be more dramatic is going from the fuzzy background to the sharp avocados. So this is a perfect example of why I might want to reverse the clip. The cameraman might have done a rack focus one way but not the other, or perhaps panned left instead of panning right. Keep in mind if you're reversing a clip. Make sure there's no people or cars in it, because they'll be able to see it's going backwards.

I am going to simply right-click on this, scroll down, choose Speed/Duration again, and just press Reverse Speed. And I am not going to actually change the speed. I am just going to play the clip backwards. Press OK and take a look at how much better this works. (video playing) Isn't that cool? Right when he says avocados, they come into focus. So as you see, it's really easy to change speed and reverse speed in Adobe Premiere Pro. 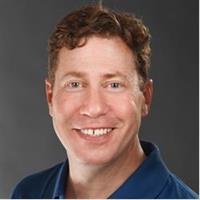