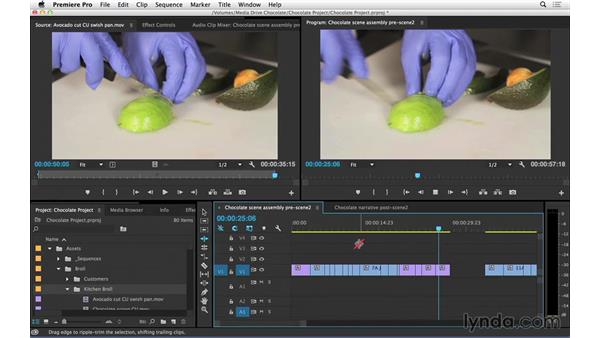 - In the previous movie, we built a scene assembly for Scenes 1 and 3. Those were fairly basic scenes. We were just following the progression of the action in order to build the scenes between Jean-Michel and Brandon. It was all continuity editing basically. Now we're gonna tackle Scene 2 where we need to build a creative scene that compresses three days of truffle making into less than a minute. The first thing that I want to look at is the first shot. Really, that means I want to look at the last shot from Scene 1. Let me just zoom in here, plus, plus, and let's take a look at the last several shots.

That shot right there, this is a swish pan. Basically, the camera person is very quickly panning away from this shot. It's a very neat transition technique where you quickly pan away from Shot A, and then quickly pan into Shot B. From Chapter Two of this course there was an example from "Some Like it Hot" that showed that. Our swish pan is almost as good. We have the avocado swish pan. Let's go into our Assets, and B roll, and Kitchen B roll. I'm just going to double-click to load this.

I want to make sure I'm in Icon view so that I can see everything. We just want to find the shot of our avocado being cut which here it is right here. I'm gonna go ahead and load it so we can see it just a little bit better. I'll play it from the beginning. In the beginning, there is the last part of that swish pan. What I want to do is mark an in and an out around the area that I want to include. I think I actually want to include this entire shot, chopping up the entire avocado.

Except the problem is, if I included everything that would be 35 seconds. Let's go ahead and bring that down anyway 'cause I have an idea. I'll go ahead and drag that down, and I'm gonna play the swish pan to see how it looks. Pretty good. Pretty fluid. For this part, again, we're taking total creative license here. I think what I'd like to do is make this a bunch of jump cuts. I'm gonna chop this up. Only the most essential parts of this process I'm gonna show, and then I'm gonna bring those together.

To do that I'm gonna use my Razor tool. That's again over here, or the C key. I'll press C, and I'm gonna zoom in a little bit. Let's just find the parts that we want to include. We're panning over, bringing it down, slicing in, and then I think I'm gonna cut away. Let's see when we want to cut back to it. How about when he opens up the avocado? So about right there. We'll continue on. We'll just have that much of the shot. Then let's go to about right there, and how much of the peeling do we want to show? Maybe about that much.

Then how about the first part of the cutting. Does that bring us to the end? Yes. What we're gonna do here is switch back to the select tool, V. We want the first part, but not the second. I'm just going to basically Shift-click every other one here, and delete. Let's just make sure that that's what we want, cut, open, peel, and slice. Perfect. There's a couple ways to do this. You can click and drag. You can right-click and ripple delete.

Or you can just click and press Option-Delete, or Alt-Delete on a PC. I think I've got the basic sections that I want here. I'm gonna refine that later, but I think I'm just gonna do a little bit of refining now. I'll press plus to zoom in here. I'm gonna switch over to the Ripple Edit tool. That's the B key. Let's just trim away some more of these shots. Like so, and we'll just have that much of the opening part, and trim, trim, and trim.

We've got a swish pan into some jump cuts, a nice creative way to start this off. We'll probably speed up the footage as well, but I like this start. The next part requires a little familiarity with how the truffles are made because we do want to go in order. We have some creative license within the structure of the order, but we do want to go from start to finish. In other words, we don't want to edit the footage of the truffle being dipped into the chocolate before we see the ganache being piped onto the sheet. I've already reviewed the footage very closely, and have a good idea of the order of things.

Let me just show you a shot list I've made to quickly get you up to speed. You can find this in the Additional Materials folder in the exercise files. Here's our swish pan, and the jump cuts. Then this next part is all kind of one action, is all the action of actually mixing the ingredients together. Here are all of the actions that involve piping the ganache. Here's the rolling actions, the coating in chocolate, and then putting it on the plate. We kind of have these beats.

You can see that there's a lot of close-ups, but there's also medium shots and long shots to give everything proper context. There are some shots with camera movement, and there are some shots where we want to speed it up into ultrafast motion kind of like a time lapse. I've organized this so that you'll have an idea of the process since you may not have time to review all the footage. But if you're doing this on your own, you just want to come up with your own process. Let's go ahead and start with the mixing shots. First we want to pan over all the ingredients. We'll go to Kitchen B roll, and I'm gonna double-click on this again to open it up.

Then we want to go to the ingredients pan. I'm just gonna type it in here. There it is. If I wanted to load this in the source monitor, I would just double-click, and I can work with it here. You can also work with it in the bin though. If I hover scrub, I can see the shot like so. But if I click on it and then just move this little slider here, I can mark an in by pressing I. Then at the end of the pan, I can mark an out by pressing O. When I bring this down, it's just brought that section.

We've got the pan. The next step we have Jean-Michel pouring the ganache into the food processor in the medium shot. I'm going to just type in pour. I think this is what I want here. I don't think I want the tilt down yet. Let's go ahead and click and mark and in, and an out. Again, we can finesse the timing later if we need to, and drag it down. I'm gonna zoom out a little bit 'cause I'm gonna move all these shots down 'cause we need a little bit more space.

But I think this is coming along pretty well. The next step let's go to a close-up of Jean-Michel's face. I'm just gonna type in JM 'cause that's how I label Jean-Michel. All right, working away. That's from his back, I don't want that. Here he is smiling. Let's use that one. I'll go ahead and click in and out, and bring it down. Okay, coming along there. This is taking a little creative license.

Continuity editing would tell us we can't cut to a shot of him smiling if he wasn't smiling in the previous shot. But, we're kind of shaking it up here. I'm gonna continue going through this paying very special care on getting the most interesting parts of each shot, and laying them in. We're not too concerned with the timing and pacing right now. We're going to finesse everything, and then we're also going to be laying in some music, and all of my edits are going to be timed against the beats of the music. As we continue going through this, sometimes we're going to practice continuity editing where we want to paint a picture of the process at hand, but at other times we can use montage, and jump cuts, and sped-up footage, and other creative methods interjected in the sequence to tell our story.

I have a sequence here where I've gone through and laid in all of the shots in Scene 2. I have Scene 1 here, and then here's my Scene 2. I'm just gonna play it, and I'm gonna play it in fast motion so it'll be going through at double speed, but I want you to see the process.

I'll just play through Scene 3 so you can see how that plays out as well. All right, so just a bunch of video segments here. It's silent, we don't have the music in. But did you notice sort of a visual energy that it has? Can you follow the process? Does the chocolate-making process make sense? Does the mixture of continuity and complexity editing work? These are all questions that we ask ourselves at this stage of the process.

In the next movie, we'll add our music, and work on refining everything so that the timing and pacing is perfect.