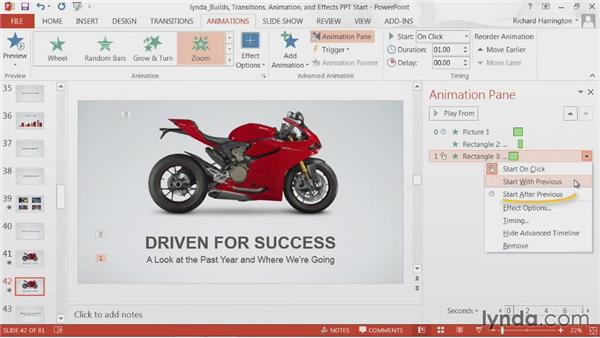 The default timings for animations may not be exactly what you want. So far, you've seen me tweak these. But I'd like to pay particular attention to the process so it's perfectly clear. Let's take a look at this slide. And you see the elements build on. These elements have individual timings assigned. Let's build this from scratch. I'd like this to move in. Let's choose an entrance effect. I'll choose fly in, and set that to be from the left. Now, let's select the other elements here, and we'll change this to be a zoom. There we go. From the center of the slide, let's select that there.

Copy it, and paste. Alright, that looks good, but I want to adjust the timings. To start, let's work with the duration. I'm going to say start this automatically after I come to the slide, but delay it by half a second. For the next one, bring that on with the previous animation. But instead of numerically entering the delay, you'll note that I can make adjustments down here. For example, I could change the duration.

Let's set that to one second and reposition it. There we go. And you'll note that the visual indication works quite well down here. And I've chosen After Previous to create that start. Let's watch that from the top. Preview. Comes in, flies in and then the next one starts. Let's engage that there full screen, slides in and we've got our delays. Now, looking up here you could really see what's happening in the animation. And this is where you could determine if something takes a click or if it automatically happens.

By setting this one to After Previous, the first animation began automatically without me having to click simply advancing to the slide triggered the animation. Then the additional elements here were set to control when they came on. So let's make this one second, and it was delayed by a second, and then the other one is set to happen immediately after, but let's introduce a slight delay. There we go. That looks pretty good, and you'll note as we make these changes how everything flows down here in the animation pane.

I like that. Additionally, if you needed to, you could change the order of elements using the re-order buttons, although I think that looks pretty good there. However, switching them changed the timings a bit, so let's just use the undo command to get things back where I want. Alright. Preview that one more time. Slides on, build, and then about a second later, the second part of the text comes on. By taking control and setting my timings, I've created fewer needs to click. With one click or in fact by just advancing the slide, everything on this slide is going to animate.

This means that when I click to go forward to this point in my presentation, I could stay focused on the audience and not have to look at the computer or my notes to remember is it two clicks or three. I'm a big fan of using these custom timings so it looks like I'm delaying the build of complex animations But, I've already pre-programmed it. So, it works so much better.

4/9/2014
It's not all about looks; PowerPoint's effects and animations can help you control the pace of your presentation and help your audience follow along. Find out how in this course, where Rich Harrington shows how to use builds, transitions, animations, and effects to relay information and add interest, without going overboard. He shows how to build text on-screen, transition between slides, set custom timing for chart animations, control playback of audio and video, and more.

This course was created and produced by RHED Pixel. We're honored to host this training in our library.
Topics include: