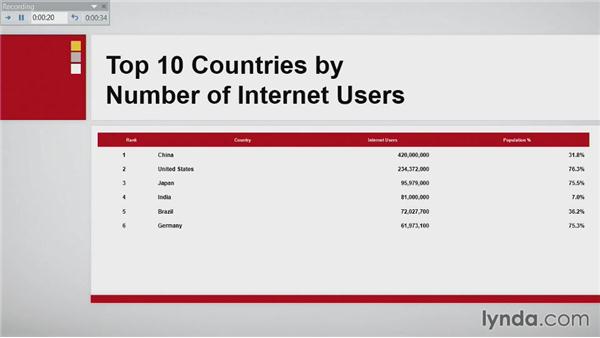 If you like this idea of setting transition times automatically, you can take it a step further. Now, I don't recommend recording all the transition times for a slideshow, unless it's a presentation you have to give often. For example, maybe you're at trade show, and you're giving the same presentation over and over, again and again. And, you've got it pretty well rehearsed. Well, you can leave your hands entirely free, and set it up to run on autopilot. Simply select the first slide in your presentation, then go to the slide show tab.

You'll notice, that you could record the slide show, in this case, from the beginning, but you can also record from a particular slide. So, for example, I could record just the slides in animation timings. Or, if I was using narration, I could actually capture that with a microphone. I'm going to turn that off in this case, and just start to record. So, today we're going to be taking a look at the goal of animation. And remember, animations are a very effective way to control the pace of information delivery. Now, there's a lot of things we're going to do, but we're using this as a sample section of slides, to show you how effective use of animation, really helps the audience capture things.

So, let's move in to the looking at the number of countries that have a lot of internet users. This is the top ten. First is China, followed by The United States. And you'll note that the percentage of the populations differ greatly. In Japan, a much smaller country but very high access rates. And as we continue to take a look around the world, you'll see that the number of internet users, varies greatly based on population. I find it most interesting how India could rank number four, with such a low percentage of the population using the internet.

But it just shows you how dense the population is there. And, as we continue to move through, there is a huge variation of the number of internet users around the world, versus the percentage of each of those countries having access. Now that we transition to another slide, I've used a simple fade. Now, if I escape and take a look at that, you'll see here that it recorded the timings for the show. And, if I click yes, those are saved. So now, when I run this, the slide presentation's going to run automatically.

And you see, that it's actually auto advancing from one slide to the next. I don't have to touch anything. It's running on it's own. Now, this can be a bit dangerous if you get questions or if you get off rehearsal. But for very short presentations, this is the ultimate way to go hands free. So, feel free to give it an experiment as you rehearse and see if it works for you. If not, you can always clear the timings out. Simply from the slide show tab here, click on the Record Slide Show, and you can choose clear.

And remove the timing for the current slide, or for all slides. This will result you back to the default starting point, and then you can go in and do it over for custom transition timings, or run without those timings and manually advance. Now, you are free to re-record the timings or take manual control back, and start to click through as you see fit.

4/9/2014
It's not all about looks; PowerPoint's effects and animations can help you control the pace of your presentation and help your audience follow along. Find out how in this course, where Rich Harrington shows how to use builds, transitions, animations, and effects to relay information and add interest, without going overboard. He shows how to build text on-screen, transition between slides, set custom timing for chart animations, control playback of audio and video, and more.

This course was created and produced by RHED Pixel. We're honored to host this training in our library.
Topics include: