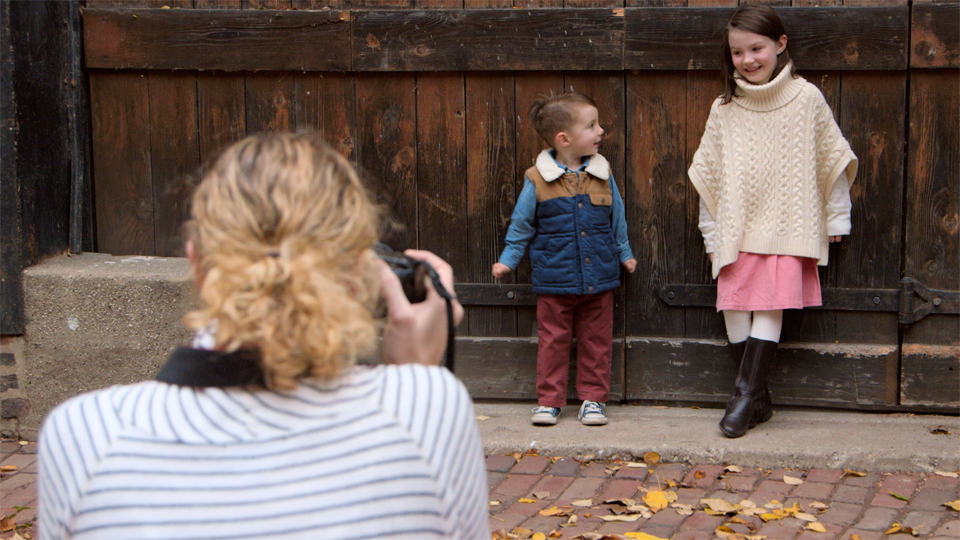 - We are going to go meet the family. I see they've arrived, so I'm gonna go introduce myself, talk to the kids, make sure that they know me, and they're excited about the adventure we're gonna go on today. We have three little ones with us today, and their parents, who are going to be our spotters as well. Hi guys! How are you? - Hi. - How are you? How 'bout some high fives today? You made it all the way to the city? - A big one. - Where's my big one? Oh. - Yeah. - How old are you now, 12? - Three. - Still three? I thought you were 12, and I thought you were 14.

And how 'bout you sweetie? So meeting this family today I talked about the three locations we were going to go to, and what sounded the most fun. Of course they're gonna say playing in the leaves. So letting them have a choice in their photo session gives them, you know, a little bit more fun. They're planning their adventure, and they're on their way to have some fun. So even on the way there I told Maddie, "Let's pick a path. We're gonna go down this way. "You go go this way. Who's gonna win?" Just making it exciting and playful as you can. You beat me! Nice work. Where's Brendan? - I don't know.

- I think he got lost on the path. Ha, there he is! Come on bud. Starting with the kids too, I never want to push them into anything. So Brendan was not excited at the beginning, he was a little bit nervous. I said, "Do you want to go with your sister? "Or do you want to have Maddie go first or together?" And he said he wanted her to go first. By herself first. All right, because I know Miss Maddie knows how to do that. So I'm gonna have you turn a little bit this way, rrr. Can you put your tummy that way? And then just have your head turned towards me.

And I'm gonna see, what are you gonna be for Halloween? - [Maddie] Uhhh. - [Voiceover] Wow, is it really dark in here. Uh, little red riding hood? And then what is Brendan gonna be? - He's gonna be the big bad wolf. - He is? Do I look like the big bad wolf right now? What do you think? Nooo. - Yeah! - I do? Are you serious? How 'bout up here, can you find me up here? Ha. No? No? I don't think so. All right, Brendan. Can you hold onto Maddie so she doesn't fall over? And I think...

I think I need to get something that you like in here. Oh, I forgot, you might want my green camera instead. Do you like green cameras? You do? Like this one? Which is super cool. Do you think that one takes really good pictures? - Yeah. - You do? Oh my goodness, I think you're right. Do you want to go close to Maddie? And give her a hug? As the session goes on sometimes you need to catch the kids attention right away, and it's not gonna be leaves, it's not gonna be things like that. So I do use the bag of tricks, as we saw before.

In this location I think it was the green camera, which always makes the kids laugh and you bring this out and say, "Is this it? Wear it on your head, throw it that way. I think that's what got Brendan's first laugh. Are you warming up buddy? Is this the silliest bouncy ball ever? Ha, what? And it even lights up! Can you believe it? Can you toss it back? Whoa, nice job! Do you want to play again? Okay, count to three, one, here it comes, two, three! Ah! It landed on my head! Is that so silly? I can't believe it just landed on my head.

Should I try it again? Let me get a little closer so that I don't drop it this time. Are you ready? One...almost! Two...Ah, three! Ah! It got my head, again! And now it's gonna get your belly button. (laughs) Now it's gonna get my head again. Nice job! Do you want to go pick a spot in the leaves to sit down? Should we go do that? All right, let's go over there and we'll see if Tess wants to join us too. After we have the two of them in the frame I decided to bring Tess in, the baby. And I always do tend to wait until the last minute to have them in, I make sure my settings are correct, I make sure the other kids are in their positions because that's your one second to grab that shot.

Okay, you are looking good. All right, so let me see Tess for a second. Hi honey. Whoa, and we're gonna see if she wants to sit with you. So Maddie, what you can do is you can put your arm behind her. One thing I also want to be careful of is when I'm shooting I am up and down with the kids, I crouch down to their level, I run up to them, I make a few adjustments here and there. And cameras are heavy, so I usually, as you'll see, whip it around to my back and then bend over, so I know it's safe on my back, it's not on my arm and when I bend over it's not gonna swing in their face.

So, same with my camera bag, I usually drop that. But one thing I always want to keep in mind is that the children are protected, they're safe, and my camera equipment, or any other things in the area aren't gonna affect them in any way. Hold on, I'm gonna see if I should put my special hair on today. What do you think, Brendan? Ha, Tessie! Ah-choo! Uh oh, Tessie. Ah-choo! My hair fell off! What? Uh oh. Ahhh-- no you want to do that too. (laughs) Maddie, could you brush the leaf off her head? Thank you.

Uh oh, one more...Ah-choo! Here I come. One, two, three-- ah it got my head! Awesome! Do you guys want to go to the next spot? All right, so why don't you leave Tess there and you two get up and I'm gonna just take a couple pictures of Tess by herself. Because she looks so happy there. So make sure that everybody gets their own pictures too. And since, you guys can go over that way by mom and dad, and I'm gonna see if I can find Tess. Ho, hi sweetie! Tess, ready, weeeee! Good job! One thing, during shoots too, is keeping the children engaged.

They will become distracted, they will get bored, they really don't want a person with a camera following them around for an hour. So I always try to stay interacting with them, and not so much the parents. And walking in between locations, as well, just keeping the conversation going, making it playful, playing happy games. Doing anything like that. Climbing the stairs, going back down the stairs, any type of thing to keep them from getting bored, and just to keep them warmed up to you, and engaged with you the entire session. Can you stand up and walk with her? She's a fast one, isn't she? And then can you look down at her when she's walking and talk to her? You can stand up Mads.

And she's gonna look right at me. I knew you'd laugh at me! All right, let's go all the way to the stairs, okay? You ready? So as we walk over to the stairs there was one incident where all three children didn't want to be in a picture. So all you do is sort of improvise and work with the ones that do. Get those shots and you'll know that you'll get the other ones eventually. You just have to wait and see when they're ready as well. So watch out for the puddle! 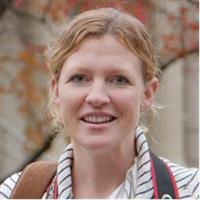 1/14/2016
Join photographer Lauren Enright for a look at the techniques behind creating great natural-light portraits of kids in the environment that's most comfortable for them: the outdoors. Lauren takes a family of five to a Chicago park to take pictures of the kids (a baby, a toddler, and a 6-year-old girl) posed in front of different backdrops. Along the way, she'll discuss lighting, camera settings, safety, and the gear you need to take great pictures of kids.