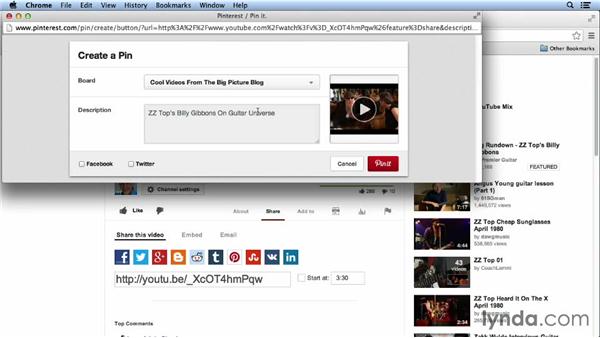 So it's now possible to pin audio and video to your boards as well as images, which allows you to share them on your page and is great for bands and musicians. The process is similar to pinning images. There're just a few wrinkles in the procedure. So the first thing we're going to do is pin a video, and pinning a video is pretty much the same as with a photo. So, in this case, I want this video, I want a mixed comparison from rehearsal to masters, so I'll hit pin it. And once again, you have different choices here of the graphics and videos that are on the page.

And I'll say I want this one, and just to make this really quick, I can select the boards, so I'll select this one. And normally I would fill this in more, but I'm just going to leave this here, so we can quickly go through it, and then say pin it. Now, if we want to see it, there it is. So, there's another way that you can actually do this. You can go to anywhere on YouTube, and in this case it's something from the Guitar Universe TV show that I used to produce. And what we do is, you go down to share and simply hit Pinterest button, and once again it pops up and it says create a pin, and it tells you where to go.

In this case we'll say the same thing, cool videos in the big picture blog. And, we'll pin it. And that should do it. It's a little different for audio, though. It's now possible to also pin an audio file, but there are far more limitations than you have a video. That's why it probably makes more sense to pin a video of your song rather than an audio only file, right now, anyway. If you only have the audio, then be aware that Pinterest can only pin from sound cloud.

So there are actually three ways to pin the audio. The first is to click the Share button below the song sound cloud wave form, and then click the Pinterest button, just like you did with YouTube. The second thing is you can use the Pinterest, pin It bookmarklet at the top of the toolbar on your browser. And then finally, you can copy the URL of the sound, and you can pin it that way. Remember that when you pin a sound on Pinterest, its artwork will automatically be displayed alongside your other pins.

And the SoundCloud widget will automatically launch when the pin is clicked. The sounds are also fully attributed with a link back to their page on SoundCloud, so its creators are always credited.

10/25/2013
Pinterest may not seem like a natural spot to share your music, but it's actually a great promotional tool—it supports sharing or "pinning" of audio and video as well as photos. Join Bobby Owsinski as he shows how to promote your band, your music, and your gigs on Pinterest. Learn how to start a page, optimize your website or blog for easy pinning, and post pictures, audio, and video to your boards.