A terrific use for Color Range 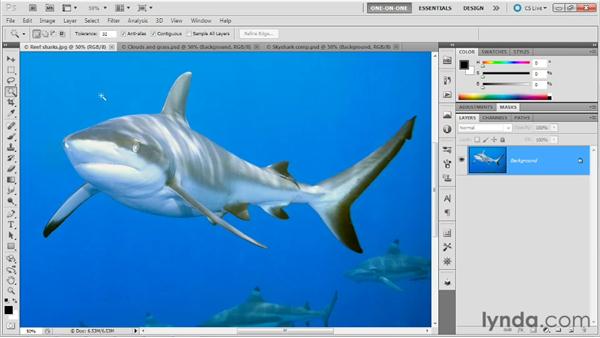 All right, now that you've been properly introduced to the Color Range command, we are going to use Color Range to create what I'm hoping you'll find to be a really fun project. And it's our first opportunity to do that thing that everybody wants to do with masking which is extracting an image from one background and place it into another. Specifically, we're going to extract this shark and we're going to move it into this new home. Now you may be looking at this thinking, these two images do not go together. There's no reason on earth to place a shark in this background. And yet we end up coming up with this final design.

And as you'll see we'll do a great job of selecting this shark, the Mask is just impeccably smooth and I've adjusted the shark to match the colors of his new home, we'll be using the shark to cast a shadow onto the grass, and then we'll wrap things up by creating that synthetic rainbow. And you'll be doing all the work. The only thing I've done in advance is set up those text layers. So, let's go ahead and switch over to the shark image. It's called Reef sharks.jpg. Now if you like you can take a swing at this image using one of the other tools. For example, let's go ahead and try out the Quick Selection tool here.

And obviously it's going to be easier to select the background because it's fairly homogeneous as opposed to try to paint inside the shark. And at first it looks like things are going go pretty well. As I drag above the shark everything is working out very nicely. I'll go ahead and drag down toward the other shark. Let's select the top of his fin, but I don't really care because I am not interested in that shark. It's when you move underneath the shark that at first you end up losing the tail and then if you paint under the larger region of the shark there you end up selecting the entire image.

Now I have no idea why the Quick Selection tool is behaving this way. Thankfully, we don't have any controls to clutter up the options bar. So there is not a darn thing we can do about it, except for press Ctrl+D or Command+D on the Mac to deselect the image. By comparison, the Magic Wand tool performs very well. Now I've gone ahead and reset the Tolerance value to 32, click in the background. It's almost like this image was designed to serve as a demonstration of the Magic Wand. I'll go ahead and Shift+Click and I select all the way around the shark as you can see. I'll go ahead and Shift+Click down here in order to select a little more.

The marching ants are doing a great job of tracing around the shark's outline. The only problem of course is that it's a pretty jagged Selection Outline. So this isn't the tool that we are going to use. But I just wanted you to see that the Magic Wand tool typically fares better than the Quick Selection tool for this kind of work. All right, I am going to press Ctrl+D or Command+D on the Mac to deselect the image and you want to make sure that no portion of the image is selected, because if you do have a Selection Outline going, the Color Range command will select inside of it. Therefore, if you want free range when selecting, you want to make sure nothing is selected in advance.

All right, so I am going to go up to the Select menu and choose the Color Range command, or you can take advantage of that keyboard shortcut and I am going to move the dialog box over so I can better see what I'm doing. And I'll go ahead and click somewhere in that blue background in order to establish the first key color. Notice that I've taken my Fuzziness value back down to 40. Then I'll go ahead and Shift+Drag inside the background a little bit, like so, and that ends up selecting just about everything above the fish. Now I'll go ahead and Shift+Drag behind its tail and I'll Shift+Drag inside of the preview a little bit right there in order to lift some of those grays.

Now it looks like we've done a pretty good job of isolating that background. But before you leave the dialog box, I really advice you to go ahead and change your Selection Preview to Grayscale and that'll give you a better sense of what's really going on. And notice I'll go ahead and zoom in here by pressing Ctrl+Plus or Command+Plus on the Mac, and I'll spacebar+Drag the image over a little bit so that we can see this little bit of junk in front of the shark's nose. Now if you decide to lift it by pressing the Shift key and clicking on it, then you'll end up selecting too much.

Notice that the selection starts to eke into the bottom of the shark. I don't want that so I'll press Ctrl+Z or Command+Z on the Mac. You do have one level of undo when working inside Color Range. And then I'll just spacebar+Drag around a little bit more and just check out what else is going on. Don't really care about the garbage down here in the bottom right corner of the image. So I am not going to worry about it. Everything is looking good, so I'll go ahead and change my Selection Preview back to none and I am also going to turn on the Invert check box, because we really want to select the shark, not the background.

Now if you are having any problems getting this selection exactly the way you want it, you can load up mine. Just go ahead and click on the Load button and then inside that 06_color_range folder you'll find a file called Shark settings.axt. Anyway, I'm going to cancel out because I like my selection. And then I'll click the OK button in order to generate that Selection Outline. Now at this point I am going to go ahead and center my view once again. Obviously, the selection isn't exactly what we want it to be. We've done a pretty good job potentially of selecting the shark, but we have these other sharks down south here that we need to get rid of.

We also need to clean up this bottom right corner and that is a perfect use for the Quick Mask mode which I will demonstrate in the next exercise.

Video: A terrific use for Color Range