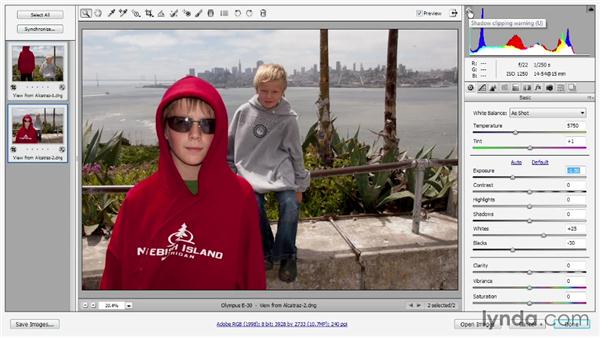 In this movie I'll show you how to work with the exposure options which include exposure and contrast, highlights and shadows and whites and blacks. So I'm going to select both view from alcatraz one and two. And press Ctrl+ R or Cmd+ R on the Mac to open these images in Camera Raw. Then I'll press Ctrl+ A or Cmd+ A on the Mac to select both of them and I'll press the down arrow key to advance to the second image. Now both of the images are quite washed out. And your primary means of correcting luminance inside of Camera Raw are these six sliders, Exposures through Blacks.

Now you could just go ahead and click on the Auto button if you want to. And that will dramatically enhance the scene. They're not exactly the enhancements I want to apply however. And for purposes of demonstration, I want to start from scratch. So I'm going to click on Default in order to reset all six of these values to zero. And we're going to start down here at the bottom, because things are so different than they used to be. Now you might think of lights as being analogous to the white slider triangle that you find inside Levels and Curves. Except the big difference is in addition to raising the whites value which is going to brighten the whites and potentially clip them as well.

And we can see that we have clipped some colors by the way in the red channel, because this little highlight clipping warning is appearing red. So if it appears red, you're clipping red. If it ends up appearing white as it is now, then we're clipping in all three channels. And obviously that's a bad thing. If you want to see where that clipping is occurring, then you press the Alt key or the Option key on the Mac. Just as you do in Levels and Curves, as you drag this wide slider triangle. Now we'll show you which colors are clipping. They're inside the image preview.

But in addition to brightening and potentially clipping highlights, you can also darken your whites. And thereby retrieve otherwise clipped highlights. So, highlights that were clipped when we first entered Camera Raw are now coming back from the dead. Alright, in my case I'm going to alter or option drag this white slider triangle until I see a little bit of clipping occurring there inside the preview and that happens at about a value of plus 25. So it's looking like I'm making the scene brighter than ever and more washed out as well.

We'll take care of that in just a moment. Next we have blacks. Now if you reduce the blacks value, it's just like raising the black point value inside levels. That is to say you can clip your shadows if you like, and in my case I'm seeing cyan. For the shadow clipping warning, which tells me I'm clipping in both the green and the blue channels. And if I take it so low that I see white, that tells me that I'm clipping in all three channels. If you want to see where the clipping is occurring, you press the Alt key, or the Option key on the Mac, as you drag the slider triangle.

But I want to go ahead and take it down, I still have Alt or Option down as well, by the way. I want to take this value down to a point where only that sweatshirt, that red sweatshirt is clipping and it's just clipping in the green channel. And I know that by the way because if I back off to the point that we're just seeing a little bit of clipping inside the sweatshirt. I'm seeing a green warning at the top of the screen. And of course, magenta tells me that I'm clipping green as well, because it's green's color complement. All right. So I'm going to take that volume down to negative 30. Next, what we have is this exposure control.

Now exposure in previous versions of Camera Raw was analogous to a white point control. It was more sophisticated but now it's more analogous to a gamma control. Again, a more sophisticated one. And, you can see if you increase the exposure value, take a look at that histogram in the upper-right corner. We're shoving the entire histogram around. So, if I raise exposure, I'm brightening the entire scene across the spectrum. If I reduce the exposure value. I'm darkening the entire scene across the spectrum.

Now one of the big differences between gamma and exposure is that gamma never clips. Where exposure will clip. You can see right now that I've managed to clip shadows in all three channels, in fact. And you can see where that clipping is occurring by pressing the Alt key or the Option key on the Mac while dragging this slider triangle. And I'm going to tell you that alter Option Drag trick works with all six of these sliders except for contrast so it works with highlights and shadows as well. Anyway I'm going to take this value down pretty low actually because I want to deepen the colors in the scene.

And so I'll take it down to negative 0.7. Alright next I'll also knock down the contrast just a little bit so I'm just going to take it to negative 10 just to take a little bit of the contrast out of the scene because there's an awful lot of contrast here in the first place. Very bright day. And now let's take a look at highlights and shadows. And these guys are pretty amazing. I want you to watch the histogram again. And you're going to see just the right half of the histogram change. When I brighten the highlights or darken the highlights. So I'm really limiting my adjustments to just the lightest colors inside the image essentially the lightest half of the luminance levels.

And there's a little bit of fade over in to the darkest half as well, but you have an amazing amount of control. And I'm going to take those highlights down pretty low. And by the way, you can alter option drag this slider triangle to preview any clipping. I'm going to take it down to negative eighty and now watch shadows. It does pretty much the flip thing over here in the shadow region. Where this image is concern is going to effect this big blue lump as well as this red lump in the middle. So if I brighten the shadows I'm going to squish that red lump over like so.

And if I darken the shadows, I'm going to turn that blue thing into a big spike, but there's very little action, if any, happening over here in the highlight region. Now, in our case, what we want to do is brighten the shadows inside Sammy's face. For example, as well as the shadows on the side of Max's, so I'll go ahead and take this shadows value up to something like Plus 70, again if you want a preview clipping. You press the Alt key, or the option key on the Mac, as you drag. Now the reason I am not concerned about the clipping inside the sweatshirt, is because obviously we have a lot of depth associated with it.

It's just clipping green. And that's just the function of this sweatshirt being so very darn saturated. Alright, so these are the settings I came up with. And then I decided that I wanted to raise the Vibrance. But, taking the Vibrance up as far as I want to go for the sake of the scene, just to keep it nice and colorful, ends up making the sweatshirt look pretty ridiculous. So, tell you what we're going to do. It doesn't need to be the super-saturated. I'm going to switch to the targeted adjustment tool, and this is kind of a preview of upcoming attractions here.

And I'm going to click and hold on it and I'm going to choose saturation. And then, I'll drag down on the sweatshirt in order to take some of that saturation out of it. And we end up with something that isn't quite shouting for attention like it was before Even though these are perhaps the baggiest t-shirts on the face of the planet. But the kids love them, so I'll switch back to basic here. And now I can go ahead and take Vibrance up some more to, let's say, about +50 is what I'm searching for. And we end up with these versions of the scene.

And just so we can, sort of, see things up close and personal here. I'm going to zoom in by pressing Control Plus. Or command plus a few times, and let's preview what we've managed to accomplish here. I'll press the p key in order to see the original version of this image. You can see that it's just so blown out by comparison. And then I'll press p again in order to bring back my modifications. Alright, and just make sure that were happy with the other image, I'll press the up arrow key in order to switch to it and pressed Ctrl + 0 or Cmd +0 on a Mac to fit the image inside the preview.

And I'll press the P key in order to see the original version of the image, quite washed out, as you can see. I'll press the P key again to see the much better modification. Thanks to my exposure adjustments. Alright, now I'll go ahead and click the done button in order to add the metadata to the images and update the image thumbnails inside bridge. And that's how you work with the exposure controls inside Camera Raw.