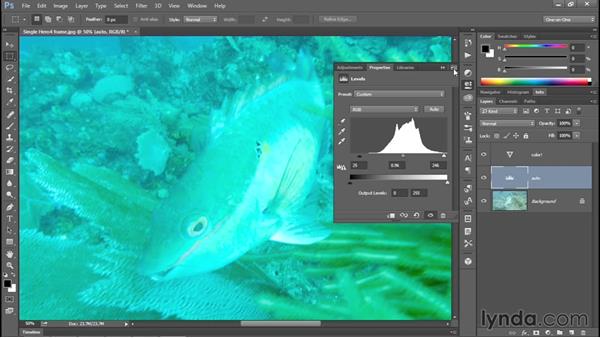 - In this movie, I'll introduce you to the quick-and-dirty method for correcting underwater photographs, and this technique is specifically designed to accommodate images that you captured without special lights or lenses. So, please bear that in mind. And even though it's going to take me a few minutes to explain exactly how it works, it literally takes seconds to do it on your own. So you can plow through lots of images in a very short amount of time. Now this technique involves two adjustment layers, Levels and Vibrance, in that order.

However, for the sake of demonstration here, I'm going to create the second adjustment layer first, that is to say Vibrance, and you can do so by dropping down to this little black-and-white circle at the bottom of the Layers panel, clicking on it, and then choosing the Vibrance command, or if you loaded my dekeKeys keyboard shortcuts, then you can press ctrl + shift V, or cmd + shift V on the Mac, and that will bring up the New Layer dialogue box. At which point I can call this layer "color" and click OK. And now I'm going to take the Vibrance value all the way up to its maximum of +100, and then I'm going to take the Saturation value to +30 for now, and I'll go ahead and hide the Properties panel as well.

Now I think it's fairly evident at this point, that we have an exceedingly blueish-green image. And that's because the other light frequencies are getting filtered out, so we're losing the warm colors, such as red and orange and yellow and so forth. And so just imagine, if you've ever been in a plane, looking down at a tropical island, and you take off and then you're seeing the ocean, at first it looks green in the shallow regions, and then it becomes very dark blue as it gets deeper, and that's what's happening underwater, as well.

When you're close to the surface, you're seeing the greens and the blues, the farther you go down the more greens you lose, as well. But that doesn't necessarily mean that we don't have any of the warm colors, and we can check out exactly what we have here inside the Channels panel, which you can also get to by choosing the Channels command up here in the Window's menu. Now notice, if I were to switch to the Green channel, I have a very bright image. That's because we have a ton of greens going on.

The Blue channel is a little darker, so presumably about 20 to 30 feet down, and then the Red channel is extremely dark, but it's not black. That means we have luminous levels to work with. And so what we need to do in order to correct this image, is to balance the various channels. We need to brighten the Red channel, we need to darken the Green channel, and so forth. And we can do that using the Auto feature that's associated with the Levels adjustment layer. And to see how that works, I'll go ahead and switch back to the RGB composite, and then I'll return to the Levels layer.

We want this new layer to be sandwiched between the image itself and the Vibrance layer. So I'll click on the Background to make it active, and then you can drop down to the little black-and-white circle and choose Levels if you like, or if you loaded my dekeKeys keyboard shortcuts, you can press ctrl + shift L, or cmd + shift L on the Mac, and then I'll just name this layer "auto" and click OK, and notice right here we have an Auto button. Now if you just click on it, you're going to be be sorely disappointed. At least where underwater photographs are concerned, its going to do very little, as you see here, but there's other options available to us, and you can get to them either by going up here, to the Properties panel flyout menu and choosing Auto Options, or you can just press the alt key, or the opt key on the Mac, and click on the Auto button.

And that'll bring up the Auto Color Correction Option's dialogue box. Notice up here at the top of the dialogue, we have a total of four different Algorithms, by default the last one is active, and that does work pretty well for a lot of images. It's also the most nuanced of the functions, but these top three options, which are the oldest ones, work better in our case. So you can either select the very top one right there, Enhance Monochromatic Contrast, that's going to give us a lot more contrast, but we're not going to account for the colorcast, and that's because this option is correcting each one of the channels to the exact same extent.

Now if you turn on Snap Neutral Midtones right here, you are going to get a little better balance. And that's because what this option is doing is, it's setting the Gamma value differently in each and every channel. But it's the next two options that are really interesting. We've got Enhance Per Channel Contrast, which is going to stretch the Histogram for each and every channel differently, so it's going to set different black points and different white points for each and every one. And if you want something that's a little more nuanced, then you want to select this next guy here, Find Dark & Light Colors.

It's designed after what's known as the Auto Color function, so the second option here, its generally known as Auto Tone, and then the second one is generally known as Auto Color. And you can tell that because you can see those words, "Auto Tone" right here, in parenthesis, at the very end of the tool tip, and then right here we've got "Auto Color" at the very end. Any way in our case, this combo right here, Find Dark & Light Colors along with Snap Neutral Midtones turned on works best. So now all you have to do is click OK.

Now you might look at this and say, "Well gosh, actually, we're still pretty far off, this does not look like a balanced image." Well now what you need to do is click in this second option, the Gamma value right there, and then press shift + down arrow, until you get an effect you like, which for me happens at a Gamma value of 0.6, and we end up with this effect here. Now at this point you might say, "Gosh, Deke, for a technique that literally takes seconds of your time, that took you a long time to explain." Well, watch me do it in real life. I'll just go up to the File menu here, and choose the Revert command, or you can just press the "F12" key in order to restore the obviously uncorrected version of the image, and then I'll work from the keyboard, because that's faster so I'll press ctrl + shift L, or cmd + shift L on a Mac, I'll call this layer "auto," I won't click on Auto, I'll just opt or alt click on it, to bring up the Auto Color Corrections Options dialogue box, I'll select that third option, I'll turn on Snap Neutral Midtones, and I'll click OK.

And then I'll click inside the Gamma Value, and press shift + down arrow a few times, and now I'll press ctrl + shift V, or cmd + shift V on a Mac, in order to create a new Vibrance layer. I'll call it "color," I'll crank this guy up to +100, and I'll take this Saturation value up as high as +70 in order to produce this final effect here. So in just a matter of seconds, I was able to take this image, quite obviously a pretty bad looking image, and turn it into this lustrously colored, underwater photograph using next to no time, and very little thought, here inside Photoshop.