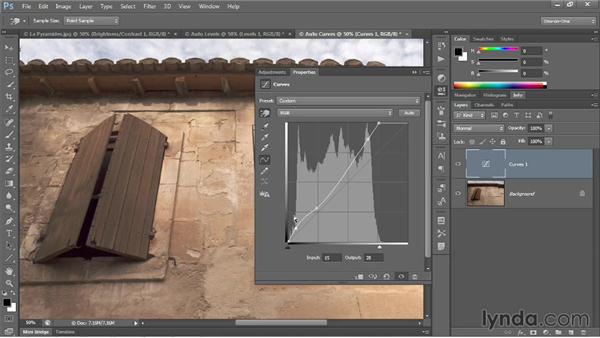 Now I'd be remiss if I failed to mention that just like brightness contrast in levels, curves offers its own unique auto function. So we might as well see how it compares to the other two and how it might serve as a jumping off point for a custom correction. So I have opened this image that we first saw in Chapter 12 of the intermediate course. And I'm going to duplicate it a couple of times by going up to the Image menu and choosing the Duplicate command, and then I'll call this image Auto Levels and press the Enter key, or the Return key on the Mac. Zoom on in, then create another duplicate by going back to that same command.

And this time I'll call my image Auto Curves and press Enter or Return on the Mac, and zoom in as well. Alright, let's start off in the first image here. And I'll drop down to the black white icon, and choose brightness contrast. And I'll go ahead and click on Auto. It's going to take a moment to calculate and then you'll see the correction in the background. And quite honestly, for this particular exercise we don't need a big huge Properties panel. So that's the brightest contrast correction. I'm going to switch over to the auto levels image. Drop down to the blackwhite icon and choose levels and then I'll click on its Auto button.

Your results may vary dramatically. But the real point is you may luck out and Photoshop may do a great job. Or, what Photoshop comes up with may be a great jumping off point. Now when I corrected this image back at chapter 12 using levels, I had to apply two applications of a level adjustments layer. One across the entire image and another just to brighten up the shadow regions and the awnings and. These wooden shutters here. Whereas I can correct this whole image using one pass of curves, as I'm about to show you.

So, I'll go ahead and double-click on the thumbnail for this curves one layer and I'll also increase the size of my properties panel so that I can take in the entire curves graph. I'm going to start things out by dragging this white slider triangle. >> Until I get to an input value of 194. So I'm mapping everything that's 194 or brighter to 255, which of course is white, then I'll press the minus key in order to select that bright point right there. Notice that it has an input of 173. I'm going to press the left arrow key a few times to back it off to 170.

And then I'll press Shift down arrow to take the output value down to 220. Alright. So that takes down some of the heat inside of those highlights. But now I need to brighten the shadows. And I'll do so by switching over to the target adjustment tool. And I'm going to search for very dark color, like right about there. You can see that my cursor. Is very close to the top of the image, above the wooden shutters. And I've found an input of 14 at this location. And I'm going to drag up until I get to an output of 28, should do the trick.

And then I'll move my cursor back into the Properties panel, so I can see those values. And I'll press the Left arrow key, in order to nudge that input value to 15. So input should be 15, output should be 28. Then I wanted to open up the shadows a bit. By taking this point right there, the point Photoshop created automatically. And I'm going to just kind of drag it up to graph to about this location. Actually I want the input value to be 96, so I'll go ahead and press the right arrow key a few times. And an output value of 115 is exactly what I am looking for, and that takes care of it.

So I'll go ahead and close the Properties panel so we can see what we've done here. I'll turn the curves layer off, this is a before dark low contrast version of the image. This is the after version of the image with more contrast. Now. The thing about those kinds of radical curves adjustments. We're going to bring it back up here. Where you're brightening the shadows and then you're dimming the mid tones and then you're brightening the highlights again so you're going back and forth is that they have a habit of reducing the saturation of the colors. So you can end up with some drab images or patches of grey.

You need to watch that. But one way to solve the problem is to add a vibrance label. So I'll drop down to the black line icon, click on it, choose Vibrance. And, I'm going to take that vibrance value way up to 70. So, I'm pressing Shift up arrow seven times in a row. And we end up with this effect here. Now, that looks great where the shutters are concerned and where the awning is concerned as well. But, the colors are a little bit too hot in the bright sections of the wall. So we need to mask this vibrance adjustment, using the opposite of illuminance mask, which is the density mask.

I'll Alt+click or Option+click on the eye in front of background. Then I'll go to Channels panel. And you can see here, that the red channel's brightest, the green channel starts darkening up. And the blue channel does the best job of showing us those shadow regions. Regions that need more vibrancy. It shows them up the darkest. And we have the most contrast across the entire image. So I'll go ahead and Ctrl+click or Cmd+click on that blue channel in order to load it as a selection. So we're selecting the highlights deselecting the shadows, switch back to the RGB image, switch over to the Layers panel.

Turn those layers back on by Alt clicking or Option clicking on the eye in front of background. My vibrance layer is selected. Oh, and this time, instead of clicking on the Add layer mask icon, I'll press the Alt key or the Option key on a Mac and click on it. And that'll go ahead and give us a layer mask that looks like this. Just go ahead and Alt+click or Option+click on the layer mask thumbnail, and you can see that we have an inverted version of that blue channel. And that is what is meant by a density mask, that is, we're masking the image based on ink density.

Alright, now I'm going to increase the contrast of this mask by pressing Ctrl+L or Cmd+L on the Mac, in order to bring up the levels dialog box. And I'll take this black slider up to about 60. The point at which the histogram begins. And then I'll click in the y point value, and press Shift Down Arrow a few times, until we really dramatically open up that shadow detail. That is to say, the highlights that we're using to select the shadows. And that happens at about 195. So, 60 for the black point value. 195 for the white point. That's it.

Click OK. And then, alt click or option click on the layer mask thumbnail again in order to achieve the effect you see before you. Alright and just to see what we've been able to achieve. I'll Alt+click, or Option+click on the eye in front of the background. That's the original version of the image. And this is the corrected version of the image. Based in small part on the auto button that's included along with Curves. And in larger part, on your ability to edit those curve settings anyway you like.