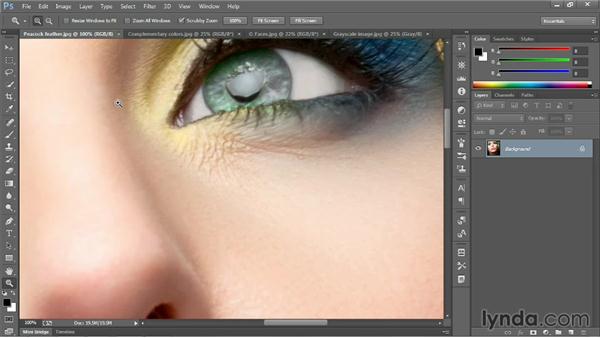 In this movie I'll show you how to incrementally zoom in and out from the image using a variety of commands and essential keyboard shortcuts. Now currently we're seeing the image at the 25% zoom ratio, and I know that because I can see 25% listed up here in the Title tab. And I also see 25% listed in this little field, which you can modify by the way down here in the lower left corner of the screen. That allows me to take in a great deal of the image at a time.

However, it means that I'm not seeing much detail because after all I'm seeing just one out of every four pixels horizontally. As well as just 1 out of every 4 pixels vertically, meaning 1 out of every 16 pixels in all. And so, Photoshop scales the image on the fly by averaging it in 16-pixel blocks. If I want to see more detail, then I need to zoom in. And I can do that by going up to the view menu and choosing the Zoom In command.

The problem with choosing the command is that you're going to be zooming in and out from your image all the time, which is why Photoshop gives you some very straightforward keyboard shortcuts. If you want to zoom in, you press Ctrl+Plus or Cmd+Plus on a Mac, and notice that zooms incrementally from 25% to 33%. Meaning that I'm seeing just one out of every three pixels horizontally and vertically or one out of every nine pixels in all. If I press Ctrl+Plus or Cmd+Plus again, then I zoom to 50% and then to 67% and finally to 100%. And at the 100% zoom ratio, you're seeing one image pixel for every screen pixel, making it the most accurate zoom level that there is. And you can even zoom in farther, by the way, by continuing to press Ctrl+Plus or Cmd+Plus on the Mac.

And, once you get to the 600% zoom ratio, you're going to see this light pixel grid, which is hard to see against that light background. So I'll go ahead and scroll down to the lips so we can take a better look at it. Now, any zoom ratio beyond a hundred percent is just blowing up individual pixels, by the way. If you want to zoom out, you just press Ctrl+Minus or Cmd+Minus on the Mac and you can press Ctrl or Cmd+Minus as many times as you want. Now, we were just zooming in on the center of the image, which means we were taking in the lips.

Presumably, that's not really what you'd like to do. You want to zoom in on a specific portion of an image. In which case, we have the Zoom tool down here at the bottom of the toolbox., and notice it has a keyboard shortcut of Z. Now again you use zoom tool so often that you don't want to have to switch to it manually and then switch back to another tool. So here's a trick you can take advantage of. You can press and hold the Z key, which gets you the zoom tool on the fly and then you can click on a specific area that you want to zoom in on.

For example, I'm clicking on the eye, and then when you're done zooming, you can release the Z key. If you want to zoom out, you press and hold the Z key again and then you add the Alt key or the Option key on the Mac and click. And as long as you've got the Z and Alt keys down or Z and Option on a Mac, you can click as many times as you want to zoom out, again, in those same increments. That is 25, 33, 50, 67 and 100%. Now if you're having problems making that keyboard shortcut work then you can take advantage of another shortcut.

And I'm just telling you so that you know it's there. I know I'm throwing a lot at you here, but it's Ctrl+Spacebar in order to get the Zoom tool here on the PC. On the Mac it's Cmd+Space bar, and then you click. Problem is on the Mac you may find that pressing Ctrl+Spacebar brings up Spotlight instead. If you want to get around that problem, you can go to your system preferences, and you can go to the Keyboard icon, and then switch Spotlight to some other shortcut, or you can press the Spacebar first and then press the Cmd key.

And that will get you the zoom tool as well, and then if you want to zoom out then you just add the Alt key here on a PC, so this is Ctrl+Alt+Spacebar. It would be Cmd+Opt+Spacebar, clicking on the Mac. Notice a couple of other commands up here in the View menu. We've got Fit on Screen, which is going to zoom the image out to a custom zoom ratio that happens to work for the active image, and that's also going to go ahead and center the image on screen like so. And the keyboard shortcut for that command is Ctrl+0 or Cmd+0 on the Mac. If you want to zoom into 100% so that you're seeing one image pixel for every screen pixel, then you choose 100%, or you can press control 1, or command 1 on the Mac, and that's just going to zoom you in on the central portion of the image there, in our case, the lips once again.

That is not very representative of the detail inside the image. So that's just something to be a little cautious of, and at first you might not notice the difference. Certainly in the video you're not going to see that big of a difference, but as you gain more experience inside Photoshop, you'll start to notice the difference on an image by image basis. In any case, that's how you zoom in and out from an image incrementally using a combination of commands, tools, and shortcuts here inside Photoshop.