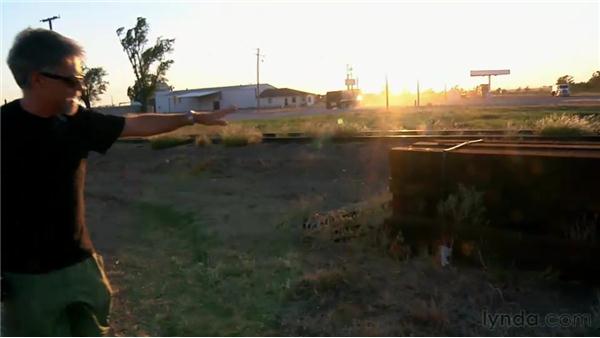 You can't tell what this is if I get in too close. So then I thought, well, I need something recognizable to try and make this scene make a little more sense to the viewer. So I started getting down low, changing my point of view, thinking well, if I am working with the tracks, if I am working with the wheels, maybe then I can get something that's more interesting, and I am just not finding anything. Part of the problem is these are really long rectangular shapes and with the lens that I am working with, I've got wide-angle lenses here, it's a little harder to fit everything into frame.

If I had a more telephoto lens, I might be able to stand farther back and zoom in to compress some of the depth, and then I might be able to bring out more repetition, something like that. Or not, it may be that this is just a flawed idea, that this is a case where getting in closer is not the right idea. So I decided to give up on these trains and I started walking away, and when I did, I found this big pile of railroad ties over here. And I'm not especially interested in railroad ties, but these caught my eye because the sun was coming off the top of them, and there are these metal plates over here that were picking up the light.

And so I thought, all right, forget the train. I'll see if there's something interesting here. Very often finding a good shot is just about luck. It's also always about looking through the frame. I decided to try and frame a shot with the railroad ties and as soon as I did, I realized, oh, here's a way of capturing the train and capturing this whole scene and in the process trying to capture something of the feel of this part of town. I can use these railroad ties as an anchor for my composition and let the train and the grain silos fall in place behind it.

Very often, composition is simply about ordering the scene before you're ordering the world. I worked with a photographer one time named Bill Durrence who said, he thinks one of the reasons he likes photography so much is for that 1/100th of a second the shutter is closed, he is in complete control of the world. And that's kind of what composition is. It's your chance to put things in order so that the viewer has an easier time finding the way through the scene. So with these railroad ties as an anchor, I'm going to put them, and at this point.

I'm actually just following the rules. I'm putting them in my leftmost third. I'm making sure my focus and my depth of field are what I need to get some of what I want here in the background in focus, and now I am just working the shot and I'm going to keep doing that until I find something that I think works. So this is a case where getting in closer wasn't working, so I made a radical change and started getting far away. This is all part of a larger idea of really working a shot and seeing what you can find, and then applying your basic compositional rules to order the scene to try to capture this larger image.

12/22/2011
Composition can make an interesting subject bland or make an ordinary subject appear beautiful. In this course, photographer and author Ben Long explores the concepts of composition, from basics such as the rule of thirds to more advanced topics such as the way the eye travels through a photo.

The course addresses how the camera differs from the eye and introduces composition fundamentals, such as balance and point of view. Ben also examines the importance of geometry, light, and color in composition, and looks at how composition can be improved with a variety of post-production techniques. Interspersed throughout the course are workshop sessions that capture the creative energy of a group of photography students; shooting assignments and exercises; and analyses of the work of photographers Paul Taggart and Connie Imboden.
Topics include: