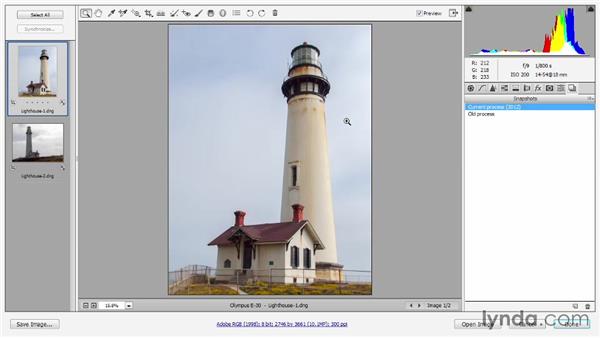 In this movie I'll show you how to work with archival raw photographs. And by that I mean images that you've processed in older versions of the software, specifically inside Camera Raw 6 or earlier. And Camera Raw 6 shipped along with Photoshop CS5. This also applies to images that were processed in light room three or earlier. And the reason I'm showing you this, is because you can do such a better job in the current version of the software. Now I have two images right here that I processed in the old days.

Lighthosue 1 and lighthouse 2 so I'll select both of them and press Ctrl+R or Cmd+R on a mac. Now I want to be able to compare the old process to the new one. And to do that, if you want to save the way things are processed right now, then you can create a snapshot. You can do that by clicking on this final icon to switch to the snapshots panel, over here on the right-hand side of the screen. Then drop down to the bottom right corner, and click on the little page icon, and let's call this guy old process, like so. And click okay.

Now switch back to the Basic panel and notice that the exposure slider is followed by a couple that we didn't see in a previous movie, recovery and fill lined. And, green as they were, I have to say they were very useful options. Things are better now. You can switch to the new process by dropping down to this little exclamation point. Notice it says update to current process 2012. And that's because 2012 was the year this process was introduced and then you just want to click on it. And what's Photoshop is going to do, notice that I, created totally new values and new sliders, here.

But it's trying to do the best of its ability match what you did previously. But I'm not interested in matching. I'm interested in doing a better job. So for the sake of demonstration, I'll click on the Default button in order to zero out those values. Now I'm going to start things off by increasing the exposure here and I'll just press Shift+up arrow in order to take it up to 0.5. You can take the blacks value down very low. Notice I'm Alt+dragging or Option+dragging in order to see the clipping. But I decide to leave that value set to zero for this specfic image.

However, I am going to take the whites values up and again I'm pressing the Alt or Option key and you can see at plus 60 we have just a tiny bit of clipping, in the upper right corner of the image. Now I'm going to go ahead and take the contrast value down just by clicking in it and pressing Shift+down arrow. Till I take that value down to negative 50. And I'm going to leave the shadows value alone for this, but I'm going to take the highlights value down to its absolute minimum of negative 100 in order to produce this effect here. Now, I think the image looks a little under-saturated, so I'll take the saturation value up to plus 20, and I'll take the vibrance value up to plus 30, like so.

Alright now let's compare what we've got here. I'll go ahead and click on the snapshots icon to switch to it. And then I'll click on a little page icon and I'll go ahead and call this guy current process 2012. And I cheated a little there because I just pasted it in. But now click OK in order to create that guy. Now I can switch back and forth between the two. So I can click Old Process in order to see the older version of the image. The original, at the onset of this movie. And now, here's the new process. Which, to my eye, looks a lot better. But it's a little subtle, so I'll show you an even more extreme example in the form of lighthouse 2.

Now notice as soon as I switch to Lighthouse 2. My snapshots disappear. And even if I had both images selected while I was working on lighthouse one, I wouldn't see the snapshots. Because you can only save snapshots to one image at a time. Alright, I'm going to drop down to the page icon and I'll go ahead and deem this guy old process and then click OK. And I'll switch back to the basic panel. Incidentally, you can switch between panels from the keyboard. By pressing Ctrl+Alt along with the number key. That's Cmd+Option with the number key on the Mac.

I'll click default in order to zero out the default values. So you may wonder, well why didn't they all zero out. Well these are the old values. I forgot to update the process, so I need to click on this little exclamation point first, and now we will see zeroes all the way down. This time I'm just going to dial in some values that I came up with in advance, so I'll go ahead and take the exposure value down to negative 1.0. I'll take the contrast value down to negative 25. Then I'll take the highlights down to negative 50, let's say.

The shadows want to be plus 80 and the whites want to be 30. And then finally, the blacks I took down to negative 80. And then finally, I'm going to tab my way down to the saturation value, take it up to 50, and then I'll take the vibrance value up to 50 as well. And incidentally, there's one more value that I've ignored so far which is clarity. And what that does is it adds contrast around the edges. So big thick edges or you can take the edges away. So notice if I take the clarity value down to negative 100, we get this kind of Thomas Kincaid effect bless his heart.

Or you can crank that value up to plus 100 in which case you get this kind of haunted lighthouse, but notice the edges there. We've got the exaggeration of the contrast right around the edges so you're probably going to end up with some haloing. Anyway, I'm going to take that value down to zero. And let's go ahead and save this guy off, as the snapshot, once again. Click on the little Page icon, paste my text in there, and click OK and now we can compare them. This, for what it's worth, if I go ahead and click on a Fly-out menu icon and choose Camera Raw Defaults, why you can see this image looked just terrible when I shot it.

And then, when I corrected it back in the old days. I got this effect, which is better, but hardly as good as it is now, thanks to the current process that was first introduced in 2012. Alright. I'll go ahead and click on the Done button, and we will see both of those images update here inside the bridge. And that, folks, is how you take images that you corrected back in the olden days. And re-correct them with better results in the most recent version of Camera Raw.