What is color correction? 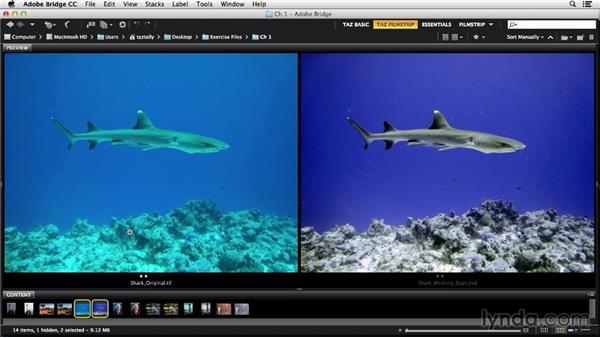 Join Taz Tally for an in-depth discussion in this video What is color correction?, part of Learning Photoshop Color Correction.

In this movie, we're going to discuss what actually is color correction. Well fundamentally, color correction is the adjustment of the balance, often referred to as white balance, of colors and typically red, green, and blue in an image. Strictly speaking, color corrections involves changing, and specifically correcting, colors that make an image appear unnatural or incorrect. Some common examples include, objects that are supposed to be white and they're not. Skin tones that don't appear to be human. And colors that appear to be washed out or under-saturated.

Here are a few common examples with images that need to be color corrected that we're going to work on in this course. Let's take a look at each of these pairs in, in turn. We'll show a before and after of each of these images and kind of describe what the challenges are and what the correction was. Just to get you thinking about color correction, so we're really clear about what it is. Alright, on the left-hand side is this starting image, the original image. And is very often is the case in color correction, we don't just adjust colors, but we also adjust brightness and contrast. Along with the colors. Those two things occur simultaneously in a lot of cases.

And obviously this is a low contrast image. And if you compare the left with the right image you'll see, and it's very obvious here that there's a blue, overall blue cast to this image. Which as you'll see as we get into talking about images, is very common in landscape image and particularly those shot on cloudy or rainy days. So the difference between the left, the starting, and the corrected image on the right, is an overall dramatic improvement in brightness and contrast. But there's also a removal of that color cast. Now you may decide that you want to have that color cast or not or somewhere in between.

It's going to be your choice. But that's the correction that occurred here. Brightness and contrast, and then removal of the blue color cast, a process that we called neutralization which we'll get into a little bit later. Alright, here's another set of images, and on the right-hand side we have the starting image and on the left-hand side we have the corrected image. And notice there's a dramatic difference between the two. In fact, if you just looked at this right-hand image you might think oh, that's a pretty nice photograph. But, when you compare it to the left-hand image. Wow, there's a huge, dramatic difference or change in the quality of the image. So, what went on here? Well, if you compared these two images back and forth, you'll see one has a little bit difference in saturation.

And as you will see time and time again when you really get into color correction and start doing it yourself. Any time you have a predominance of one color over another one, in this case, blue over red and green, that excess of blue tends to desaturate the other colors. There's also, not quite as dramatic as what we saw in lighthouse image, but there's a difference in brightness and contrast, alright? So again, we have a little bit of adjustment to brightness and contrast, but a removal of a blue color cast, and an enhancement of the reds and the greens in this image. Let's take a look at another comparison.

This is a dramatic one. Here, on the left, we have the starting image and on the right we have the corrected image. And this is obviously a whitetip reef shark that I shot off the coast of Australia in the Great Barrier Reef. And, if you've ever been scuba diving, in particular if you've ever done any photography in scuba diving. When you get down anywhere below just a couple of feet, everything you looks bluer and bluer and greener and greener because all the longer wavelength's radiation, the reds and the yellows and even some of the greens are absorbed by the hydrogen bonds in the water. So you end up with these really, really blue-green and ultimately sometimes as you go deeper purple images.

So, color cast in diving images very, very common. And you can see what the correction here is a dramatic improvement in the overall saturation of the blues. And notice that the shark actually looks neutral gray as it's supposed to. So not so much of an improvement in brightness and contrast, a little bit, but a dramatic change in removal of that big, big, big blue-green color cast. Alright, another common problem that we have with color correction images that you have to do a lot of correction on, and that is skin tones. We're going to talk a lot about neutrals and using neutrals to help us correct our images.

But when you have something that's a, like this portrait, right? Skin tones are the key. That's really the key part of this image. And starting with the image on the left. And once again, if you looked at this image you might go like oh, that's not a bad image. But when you look at the corrected version, oh, that's a lot better. And here again, we have a, a fairly strong blue color cast, creating a coolness to the skin which doesn't make it look very healthy. On the right-hand side, much warmer color cast in this image and making the skin tones look a lot more healthy. Little bit of improvement in brightness and contrast, but overall it's really just a change in the color cast of the image.

All right, I mentioned earlier that when you have abundance of one color over another, like blue over red and green for instants, that that abundance of blue not only makes the image look bluer overall, but it reduces the saturation of the other colors. In here, you see a dramatic representation of that. Once again, a common blue color cast as we often have in landscapes. And notice that the reds and the oranges and the greens and the yellows in the left-hand image are far less saturated than what you see on the right-hand side. So the removal of a blue color cast and then all the other colors really start to pop up.

Look at the greens in the trees and how they really pop in the corrected image. Alright, here's another before and after. Another dramatic change in the color cast of the image. And again, if you just looked at the left-hand image by itself. You know, the human brain, the eye brain connection tends to look at this image and go, that's a pretty nice image. But boy, when you see it against the corrected version. Wow! What an eye popper, right? The sky are really popping out with the clouds, and look at the colors in the, in the signs and the rest of the image. Again, here we have a strong color cast and it's a blue-green color cast. And we're removing that, neutralizing the image, and all the other colors will pop right up.

And our final example here is one based upon target-based corrections. One of the key concepts that we're going to be discussing, is that when you were to correct color, you're really correcting grayscale. So if you get the grayscale correct, the color is going to be correct. And on the left-hand side, you see this in spades. Without this target in this grayscale target in the image, you really wouldn't know that this image was maybe the wrong colors. But when you look at this grayscale target and it's supposed to be gray. And you can see there's a strong red-brown color cast to this image. And on the right-hand side the corrected version and is we're going to do we're going to correct this image, this starting image, using the grayscale target that you see here.

When the grayscale target is correct, the colors in the image are correct. And we'll discuss all the, details about how that work as we go along. But notice the before and after and the strong removal of a red-brown color cast and notice how all the other colors in this image again, pop. So, what we have here then is a, is some examples of, all the various kinds of images that we typically run into some landscape, some skin tones. some target based images and changes in color cast and brightness and contrast. And we're going to start the whole process with talking about image evaluations.

And then introduce you to the tools that we use to correct the color images. And then goes to the step by step procedures for actually correcting the color cast in our images.

10/14/2013
Photoshop Color Correction is a series designed to help you understand how color works in digital images, and acquire the skills you need to correct color and make creative image adjustments in a variety of scenarios. This is the foundation of the series. Start here to learn how to use channels and histograms to identify problem areas, apply adjustments such as Curves and White Balance, and make edits that change the entire mood of an image. Taz Tally takes you between Adobe Bridge, Photoshop, and Camera Raw, making sure you get the most power from each tool in the workflow. Future follow-up courses will be project-based "quick wins," but you can return here at any time to revisit the basics.
Topics include:

Video: What is color correction?