What is a cinemagraph? 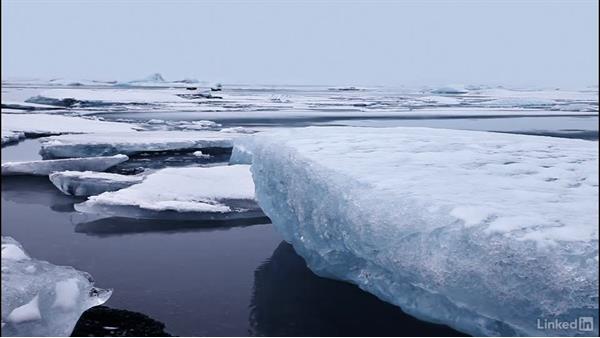 Join Seán Duggan for an in-depth discussion in this video What is a cinemagraph?, part of Creating a Cinemagraph in Photoshop.

- [Voiceover] Even if you're not familiar with the term, you've probably already seen a cinemagraph in your travels on the internet. Some versions of cinemagraphs that you see on the web are presented as animated GIFs, while others may link to higher resolution video files. Animated GIFs are the most popular way to share cinemagraphs on social media sites. The typical animated GIF is generally a short looped video, often created from clips from old movies or tv shows, or they can also be made from animated artwork. An effective cinemagraph, however, has more in common with good photography and, at times, the hint of a story.

A cinemagraph is not a file format but rather a type of image. It's a still image with just a hint of motion somewhere in the scene. Sometimes that motion may appear as a continuously moving element, such as this river approaching the edge of the cliff. This is a very simple cinemagraph, and the soothing motion of the water in this natural scene would be well suited to display in high resolution in a digital frame. Here's another variation on a simple natural scene.

The only motion here are the drops falling from the ice and the ripples created in the lake. The motion in a cinemagraph is always repetitive since the basic structure of the medium is that of a looped video. Some types of motion are better suited to this than others. For instance, naturally repetitive motion such as that found in moving water or objects being ruffled by the wind work well in cinemagraphs. In such scenes we expect the motion of water or wind to be constant and so it looks natural and is not distracting or contrived.

In scenes where there is an action that happens, such as someone walking through the scene or a light turning on, that repeating motion or action may become a bit tiresome after a while. Now, in this scene here my sleepy dog was opening her eyes, but she was so sleepy that she was just doing it very slowly. And so even though this action is repeated over and over again it does work well in this particular cinemagraph. Where I find the cinemagraph form really intriguing is in mixing it with Photoshop Compositing to create imaginary landscapes or mysterious scenes that suggest the hint of a story.

This approach allows me to create composites that include an element of motion, which can really add an interesting quality to the scene. In this course we'll explore the basic cinemagraph effect, but we'll also take it a step further by combining it with compositing techniques to create an entirely new scene.

4/6/2016
Put your stills into motion with cinemagraphs. A cinemagraph is a still image that contains a trace of subtle motion: wisps of hair in the breeze, water running through a stream, or a dog's tail wagging. You can use numerous tools for creating cinemagraphs, and one of the best is Photoshop. With Photoshop's masking, compositing, and video features, you can combine the layers of a still image with video that makes a cinemagraph come to life. Photographer, author, and educator Seán Duggan shows you how.
Topics include:

Video: What is a cinemagraph?