What is Adobe Camera Raw? 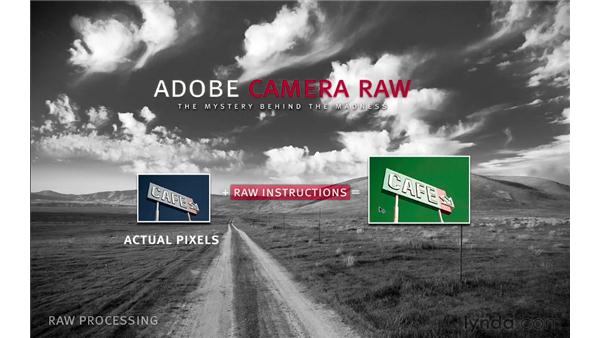 In photographic circles, Adobe Camera Raw has become quite a hot and popular topic. There's so much excitement about raw capture and raw processing. Yet sometimes some of this is a little bit mysterious, it's a little bit confusing. So, what I want to begin to do here is to distill things a bit and the first thing that we need to do is take a look at two terms: Raw Capture and Raw Processing. For starters, Raw Capture has to do with how we're actually capturing the image on camera. On the other hand, Raw Processing is all about using Adobe Camera Raw.

Well, let's define these even further starting off with Raw Capture. Whenever you capture an image with a digital camera, the image is captured on the sensor and if you're capturing in JPEG mode that information goes through a whole sequence of steps here; Bayer Interpolation, White Balance, Contrast, so on, compression and then we get the JPEG. On the other hand, we can capture file in its raw format. In other words the information simply comes straight off the sensor and we have all of this raw data. So in this scenario, we're talking about Raw Capture.

Now in contrast, when we talk about Adobe Camera Raw, we're talking about something completely different. This has to do with how we process an image in software which is called Adobe Camera Raw. So, one of things that happens when we're using Adobe Camera Raw is that we have these actual pixels, we have image information. Well, we then apply a set of instructions to these actual pixels and the instructions are actually kind of interesting, they're simply a laundry list of information, which describe how we want this image to be displayed whether the crop or the color. And so what happens then is the set of instructions displays an image in a particular way.

Now the nice thing about Adobe Camera Raw is that working in this context, it's completely non-destructive. In other words, no pixels are harmed, no pixels are affected, we're not actually pushing pixels per say. Rather, we have pixels that we're applying some instructions to, which then in turn display the image perhaps in a different way. This in turn gives us a lot of flexibility and we can always undo whatever we've done. This can also really speed up our overall workflow, because if you think about it, with Adobe Camera Raw there's no render time, because you're not actually doing something to pixels, rather you're simply changing the set of instructions.

So again, this can result in a different format and here you can see I have yet another version of this image. The other thing that's kind of interesting about Adobe Camera Raw is that we can process images, whether the RAW, DNG, TIFF or JPEG in this format, so we're not limited to just working on files that were captured in the Raw format rather we can use these different types of formats. All right, well if we had to distill this how we would do that. Well, think of Adobe Camera Raw as a way to non-destructively edit and work on your photographs and what it does for use is it helps things to be a little bit more flexible, because you can always undo whatever you've done. It also will really speed up your overall workflow, because, while working in camera there is no render time there is really no save time and so it speeds things up by leaps and bounds.

And then lastly, I like to think of Adobe Camera Raw as a really creative space. It's not just functional, but it can help you come up with some really creative ways to process images and it's because of these reasons and more, as you'll soon discover, that Adobe Camera Raw really has become one of the most premiere and prominent tools of our time.

5/18/2012
This course provides in-depth training on Camera Raw 7, the Photoshop CS6 component that enables photographers to open and manipulate raw format images. Raw images are minimally processed in the camera; they're effectively the exact data recorded by the camera's sensor. Author Chris Orwig shows you how to control a raw image's appearance—exposure, shadow and highlight detail, color balance, and sharpness—with far more precision than is possible with JPEG images. The course also introduces the new workflow procedures and technical concepts and issues associated with raw content, so that photographers can best leverage this powerful format.
Topics include:

Video: What is Adobe Camera Raw?