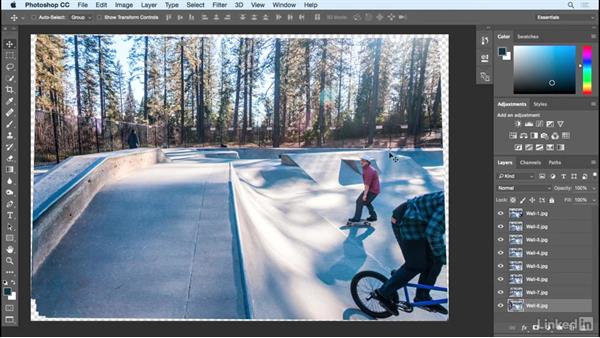 In this tutorial, photographer Sean Duggan shows how to use a Photoshop feature called Layer stack to quickly align a series of photographs.

- [Voiceover] In this chapter, we're going to be working with another skateboarding motion sequence, but this sequence has some significant differences from the one that we worked on earlier in the course. In that first sequence, the skateboarder was traveling through the frame from the right side to the left side, and they were pretty much on the same plane of focus as they moved through the frame. It was just a parallel movement from right to left. In this sequence, the skateboarder starts out in the background of the shot, comes up into the middle, which is where kind of the main action area is, and then travels forward and towards me as he then exits the frame.

So we have a very different range of motion from background to foreground. That's going to create some additional challenges. Now by the way, in terms focus, let me just mention here that I was prefocused on this central area at the top of the ramp there, because I knew that was where kind of the main action was going to be taking place. So I really wanted to have him in focus at that point in time. Alright, we're going to be loading these into a stack of layers in Photoshop using a different method than we did earlier in the course.

I'll just click Open, and it adds those files to the list here. Now one thing to notice is that there is a different file there that we didn't see before, a non-JPEG file. This DS_Store file is actually created by the Macintosh operating system. It's a hidden file that you wouldn't normally see. The Mac OS just uses it to remember what your system configuration was, but the presence of this file can break this script. So we want to remove that. So if you see any extra files in here that are not the eight JPEGs that we want, just click on it to highlight it and then click the Remove button.

Great. Next, I'm going to click the check box to attempt to automatically align the source images. This essentially is going to do the same thing that the Edit Auto-Align Layers function did. We used that earlier in the course, but we'll be able to do this as Photoshop opens the files. Alright, I'll just click Ok and let it rip. Ok, it's done. So the first thing that I want to do is check out the alignment of the background to see how well Photoshop did.

So I'm going to do that just by turning off the visibility icons, these eye icons here for each layer, and see how the background alignment works. It looks like Photoshop did an excellent job. So that's a really cool way to automatically align the layers as you're opening the files. Another thing I want to check out here is what might the potential issues be with overlap of the subject. So, probably not there and not there, but once he starts to crest the top of the ramp here, he kind of slows down a bit as he goes over the top there.

So there definitely might be some overlap issues on some of these latter frames here. Now here's a useful way to check that out. I'm going to select all the layers in the stack. So my bottom layer is active right now. I'm going to hold down the Shift key to click on the top layer. I'm going to come to the Blend Mode menu, and I'm just going to choose Darken. The reason I'm choosing Darken is that the skater, just based on what he is wearing, is darker than most of the concrete area that he is skating over.

Now your mileage may vary of course, depending upon the specific areas of light and dark in whatever photos that you might be using of your own, but for this particular image, that works well, just to give me a quick sense of where my main overlap issues may be. So I can see that I might have a little bit of arm overlap issues here. Not much there. A little bit of skateboard overlap issues here. Again, more arm issues, but these two frames right here are ones where I'm seeing a lot of overlap, and it's just kind of blending together.

So what I want to do is figure out which layer this one is right here. Of course, this trick that I showed earlier is not really working for me here, because when I right click to show the Contextual menu, to see which layers are there, it shows me that all of the layers are there, because indeed they are. This is just an entire stack of layers. So what I need to do is kind of make a guesstimate and see which one that might be. Nope. Ah, there it is.

It's Wall-6 and I think I'm going to get rid of that because when I get rid of that, it makes this nice space between these two instances of the figure, and I can see a much clearer definition of the skateboards. I don't like the fact that the skateboard is being kind of muddied up with that layer there. So, there's two ways you can go about this. You could either throw this layer away by dragging it down to the trash can, or you could put it in a layer group and label it as not being used.

Then I'll come and shift click on the top layer, Wall-1, and I'll just reset the blend mode to normal. Alright, now that we have our files arranged together and aligned, courtesy of the Load Files into Layer Stack script, and we've done a little bit of previewing for what our overlap issues might be, our next step is going to be to create the layer masks and start to build the sequence.

3/23/2016
Great athletes make great action shots. But an action shot shows just one moment of action—it doesn't show the arc of a golfer's swing or the form of a runner's sprint.

By combining your camera's burst mode with Photoshop, you can create a composite that shows an athlete in action. In this course, photographer and educator Seán Duggan shows how. After mapping out a plan for lighting, composition, and more, he photographs the subjects. Then, the action turns to Photoshop, where he assembles the composite using layer masks and some careful retouching.
Topics include: