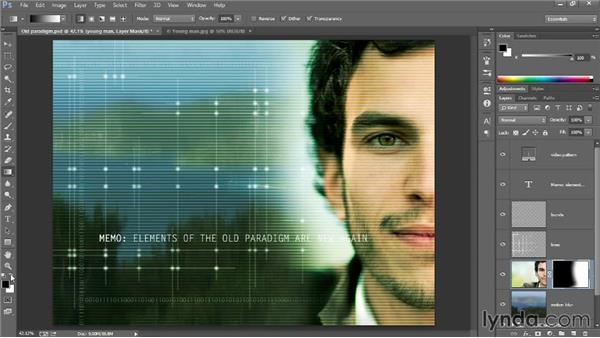 In this movie, I'll show you how to create and modify a layer mask, which allows you to temporarily erase portions of the layer so that you can seamlessly integrate that layer into a larger composition. In our case, we're going to take this portrait from the Fotolia image library, and we'll add it to this composition right here, which is called Oldparadigm.psd. That'll become important in a moment. Now notice, over here in the layers panel, that we have lots of layers and that the motion layer is currently active.

These lines and bursts and texts and so forth are on top of it. And so when I add the portrait to this composition, it's going to appear directly on top of this layer. Now, I want a little more room for my layers panel, so I'm going to collapse the adjustments panel by double-clicking on the word adjustments. So when you double click a tab, you collapse a panel, to expand it again you just need to click once. Anyway, I'm going to hide it and then I'm going to switch back to my portrait shot. But notice that I've selected the Rectangular Marquee tool, so that when I right click I can get to the duplicate layer command.

I'll go ahead and name this layer young man and I'll change the document to Oldparadigm.psd and then I'll click OK. Alright now, to see what's happened, we have to switch back to that old paradigm document. I need to move this guy into position a little bit, so I'll zoom out and I'll go ahead and select the Move tool, and then I'll drag this guy down until he snaps into alignment with the upper left corner of the image. And to test that that's the case, I'm going to press Ctrl + 1 or Cmd + 1 on the Mac to shift to the 100% field, and you can see that I have a little bit of a gap there, so I'll go ahead and drag this guy again until I'm convinced that it's snapped.

And I believe it has. If you ever want to confirm that, by the way, that you've got an absolute match up there, in for example the upper left hand corner, you go up to the edit menu and you choose the free transform command. Not because we're going to transform anything, we just want to see that we have a corner handle right there at that location and you can also confirm things numerically up here in the options bar by selecting the upper left reference point and making sure that both the x and y values are zero.

Alright, I'll just press the Escape key, in order to escape out of that mode, and I'll press Ctrl + 0 or Cmd + 0 on the Mac, in order to zoom back out. Now we want to add a layer mask to this layer and you do that by dropping down to this add layer mask icon, that's right next door to the FX icon. And then you click on it. Now that'll create a new thumbnail to the right of the image thumbnail. By default, a layer mask comes in white. Where layer masks are concerned, white means opacity, and black means transparency.

So you paint holes into the layer by painting black into the layer mask. And I'll show you how that works. I'll go ahead and select the Brush tool and then I'll right click inside the image window and I'm going to change the brush size to a thousand pixels. And I'm going to change the hardness to 0%. You also want to make sure that your foreground color is black. Very likely it's white, which is the default foreground color when working with masks. In which case, you'll have to click on the little switch icon in order to make it black.

And now notice, I'll press Ctrl+0 or Cmd+0 on the Mac, to once again back up. And now if I paint inside this layer mask, I'm painting in transparency as you see right here. Now if I go too far with my painting, it's no problem because every modification I'm making is nondestructive. Meaning that I'm not harming a single pixel in my original image. All I have to do to paint that detail back, is click on the switch icon again in order to paint with white.

And now when I paint white into the layer mask, I paint in opacity. Alright, but I don't really want to brush in this mask. I want to apply a gradient. And gradients can be extremely useful in layer masks because they allow you to create smooth transitions. So I'll go ahead and select the Gradient tool, just below the Eraser tool, and then I'll switch my foreground and background colors so that black is foreground and white is background. You should see, if you've been working along with me, a black to white gradient up here in the options bar.

We've got a linear gradient, and so forth. And I'll drag from just about the third E in elements, over to the i in again, right there. And I'm going to press the Shift key, so that I'm creating a perfectly horizontal gradient. And then I'll release in order to create the gradual fade. And you can see it's perfectly even. Now, at this point, I want to better integrate this guy into the scene. So, I'm going to assign a Blend Mode to this layer. I was telling you that, when you want to create a contrast effect, the best Blend Mode is Overlay.

But, that doesn't mean it's always going to work. So, I'll go ahead and give overlay a try because its a good place to start, but I'm losing a lot of the definition. If that happens to you, then try out one of the other contrast modes, now the last two are rarely of any use at all, by the way. But you may find soft light to be helpful, it's going to create more of a subtle effect than overlay is. Whereas hard light is going to create a stronger effect and in our case, hard light is the way to go.

But, the only problem is that the colors become over saturated, especially the reds in his face and in his lips. So what I want to do is leech away some of that saturation using a color adjustment. So I'll go up to the Image menu, choose Adjustments and the command that I'm looking for is Hue Saturation. But it's dimmed out, meaning that I can't choose the command. So, what's the problem? Well, the problem is that I still have my layer mask selected. So notice that you've got this kind of double border effect, that shows you whether the layer mask or the layer itself is active.

In my case it's the layer mask. So I need to click on the thumbnail for the image to make it active instead. Then, I'll go up to the Image menu, choose Adjustments, and Hue Saturation is now available. Now, I was showing you before, when we were working with the hue saturation adjustment layer, that you can take the saturation out of an image. And if you send the saturation value to negative 100, you'll take all of the saturation out. But, that's not what I want to do.

I just want to remove some of the saturation associated with the lips. So I'll go ahead and restore the saturation level to zero. Notice this item right here that says, Master. If you click on it, you'll see that you have independent control over the reds, yellows, greens and so forth. I'm going to choose reds, and then I'm going to back off the saturation of just the reds, like so. But I'll take it to, let's say about negative 25 is going to work well. And that way, we're not affecting the saturation of any of the other color ranges.

And now I'll click OK in order to apply that effect. Alright, just one more item here. Notice that we're starting to lose some contrast around the word new and the beginning of the word again. So I need to paint away some of this brightness in this layer. So I'll go ahead and grab my brush tool once again. And I want to stick with that ginormous thousand pixel brush, and I'll click right at that location there. But that ends making things too dark. And if you take a look at the image thumbnail here inside the layers panel, you can see why.

I just got done painting the portrait black as opposed to the mask. So I'll press Ctrl + Z or Cmd + Z again, and then I'll click on the layer mask thumbnail, so it's very important to keep in mind which is thumbnail is active. Then go back into the image and click again, and you'll notice this time that you've clicked inside the layer mask, because you can see that fuzzy blob of blackness there. And now click over here as well, just so that we have a better transition into the gradient. Alright, just to get the brush offscreen, I'll go ahead and switch it back to the rectangular marquee tool.

Then I'll press the f key a couple of times and zoom in on the final composition. And that's how use a layer mask to temporarily brush away portions of the layer so that you can seamlessly integrate that layer into a larger composition.