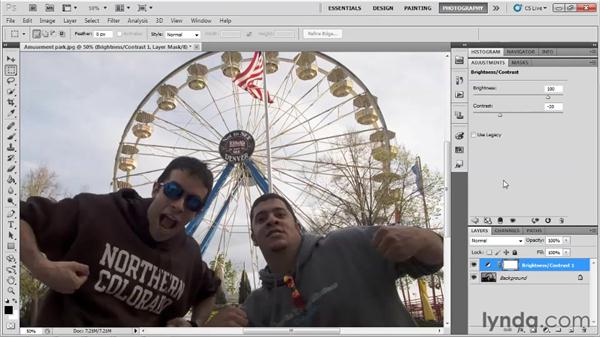 In this exercise, I'm going to replay those exact same adjustments I applied in the previous exercise. However, I'm going to do so using what are known as adjustment layers and you'll see how they provide us with greater flexibility. Now assuming you're working with the PHOTOGRAPHY workspace, and if you want to confirm that, you can go ahead and drag this double-vertical line item here inside the Applications bar over to the left in order to expand your workspace list. And you'll see that PHOTOGRAPHY is active for me.

And I'm going to do so not by dragging the slider triangle, which of course you can do, but rather by nudging the values from the keyboard. So I'll go ahead and click inside this value to make it active. And then notice, in my case, its -1; if I press the Up Arrow key, it changes to 0. So pressing Up or Down Arrow changes the value in increments of 1. If I press Shift+Up Arrow, then I increase that value in increments of 10. So I'm going to go ahead and increase that value by pressing Shift+Up Arrow until I take it up to 100.

Then I'll press the Tab key in order to advance to the Contrast value and I'll press Shift+Down Arrow a couple of times in order to change that value to -20. On a side note, make sure that the Use Legacy check box is turned off as by default. If you turn that check box on, you can end up clipping luminance levels. That is, you'll change many of your shadows to black and many of your highlights to absolute white which is not what you want inside of a continuous tone photograph. Next we need to add color saturation just as we did in the previous exercise, so I need to add a Vibrance adjustment layer.

Well, because I'm working on this Brightness/Contrast layer, I can't see my list of color adjustments here inside the ADJUSTMENTS panel. One of two ways you can now get to Vibrance; one is you can drop down to the bottom of the LAYERS panel, see that little black and white circle, go ahead and click on it and you'll see a list of the adjustment layers that are available to you. You'd go ahead and choose Vibrance, and then you see those Vibrance options up in the ADJUSTMENTS panel. The other option that's available to you and my preferred way of working is to drop down to the bottom left corner of the ADJUSTMENTS panel and click on this left-pointing arrowhead.

Notice it even tells you that you'll return to the adjustment list. If for some reason you need to go back to the Brightness/Contrast options, you can click on this right-pointing arrowhead, or you can double-click on the little black and white circle to the right of the Brightness/Contrast layer. In our case though, we want to see this list and I want to add a Vibrance layer by clicking on the first icon in the second row. Then I'm going to go ahead and take that Vibrance value up to +60 just as I did before.

Now at this point you might figure we haven't really done anything that we didn't do in the previous exercise, which is of course true. The great thing now is I don't have to take advantage of that precarious revert trick that I showed you before in order to compare the before and after views of the image. Instead, I can drop down to these little eyes that allow me to turn the layers on and off. If you click on one of the eyes, that'll go ahead and turn that layer off; click again to turn it on. So that gives you a sense of the contribution of that one color adjustment.

You can also turn Brightness/Contrast off and then on independently of the Vibrance adjustment to see what kind of contribution it made. And if you want to see that original background image by itself without any color adjustment applied, then you press the Alt key the or the Option key on the Mac and click that Eye icon. That goes ahead and leaves the one that you Alt+Clicked on and turns the other two off. To go ahead and turn them back on so we're seeing the after view, you Alt+Click on that Eye icon again.

Another great advantage to working with these adjustment layers is you can now change your mind. So let's say in reviewing the Brightness/Contrast adjustment, I figure that I added a little too much brightness to the image because I'm starting to lose some of the definition in the sky. I'll just click on the Brightness/Contrast layer in order to make it active. And then I see those dynamic Brightness/Contrast values represented inside the ADJUSTMENTS panel. I'm going to take the Contrast value down to its absolute minimum by pressing Shift+Down Arrow three times in a row, the minimum being -50.

And then I'm also going to take that Brightness value down to +60. So we end up with a darker image with less contrast that darkens the foreground subjects of the image but it also brings down the sky. So we can see the variation offered by the blue of the sky and the white of the clouds. One more trick that you might want to know about; check out how very small these little layer icons are, and you can barely make out that thumbnail preview associated with the background image. If you'd like to see bigger thumbnails in your LAYERS panel, then drop down to this empty area below the background image, right-click and go ahead and choose either Medium or Large Thumbnails.

I'm going to be working with Large Thumbnails inside this course. Now that squeezes the LAYERS panel to the point that I can't see all the layers, in which case I would go ahead and collapse the ADJUSTMENTS panel by double-clicking to the right of the word MASKS. Now to give you a sense of what we've accomplished, I'll Alt+Click on the Eye icon in front of the background image to see the before version, and then I'll click again in order to see the after version. And that's how you take advantage of editable dynamic adjustment layers here inside Photoshop.

8/18/2011
This course is a streamlined introduction to Adobe's flagship image-editing application, specifically geared to photographers and enthusiasts. Photoshop guru Deke McClelland shows how to enhance photos and transform them into stunning images, in the shortest time possible. The course covers the basics of correcting, retouching, and cropping, as well as applying filters, building layered compositions, and creating seamless panoramas.

For a guide to getting started with designs and artwork in Photoshop, check out Up and Running with Photoshop for Design.
Topics include: