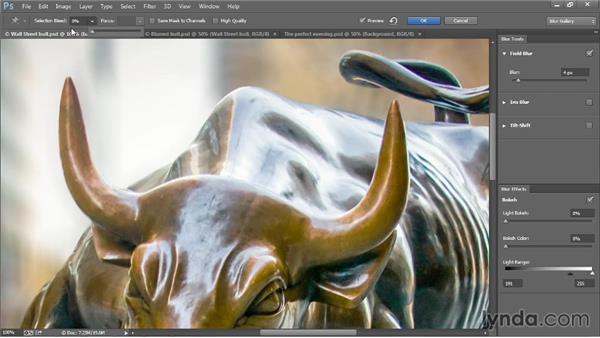 In this movie, I'll introduce you to a feature called Selection Bleed. And the idea is this. If you select a portion of an image, and you apply any of the filters in the Blur Gallery, then you can choose whether or not to bleed the deselected portion of the image into the selected region. Now, when you're using a more basic filter like Gaussian Blur, this happens automatically. The great thing about Field Blur and the others is that it doesn't happen automatically, and I'll provide you with a couple of examples. Now, over the course of this first project, which is going to bleed if you will into the next movie, we're going to take this Wall Street bull from the Fotolia image library, about which you can learn more at fotolia.com/deke.

And, we're going to turn it into something that has a lot more impact, a much more interesting composition, in my opinion. I'm going to start off inside this image here. Now, the one bad thing about Selection Bleed is that it doesn't work when you apply any of the Blur Gallery filters as smart filters. You have to apply them as static effects, so I'm not going to be able to work directly with this smart object. So I'm going to copy it to a pixel-based layer by pressing Ctrl+A or Cmd+A on a Mac. And then I'll press Ctrl+Alt+J or Cmd+Option+J on a Mac in order to bring up the New Layer dialog box.

And I'll call this guy Backdrop, and I'll click OK. And you can see by virtue of the fact that I selected the image before jumping it. It is now a plain pixel-based image layer. The next step is to go the Channels panel where I've created some selection outlines in advance. You can see this guy, Polygonal Lasso, and that's what it is. This is the selection that I drew using the Polygonal Lasso tool. And then I used the command under the Select menu called Refine Edge in order to more accurately trace the bull. And I ended up with this version of the selection right here.

And we'll be learning more about Refine Edge in a later chapter in this very course. But for now, I just want you to load the Alpha Channel as a selection by pressing the Ctrl key, or the Cmd key on a Mac, and clicking on that thumbnail right there. Then, switch back to the RGB image and return to the Layers panel. Now, I want to affect the area outside the bull, so I need to reverse the selection by going up to the Select menu, and choosing the Inverse Command. Next, go up to the Filter menu, choose Blur Gallery, and choose Field Blur. And that'll bring up this single pin in the center of the image.

I'm going to go ahead and drag it down and to the left so that it's underneath the bull's arm, like so. And I'm also going to take the Blur value up to 30 pixels. And now I'll create another pin right at this location here, and I'm going to take its value down to 4 pixels, which gives me a little bit of blur underneath the animal's hooves. Now, I press Ctrl+H, or Cmd+H on a Mac, in order to hide the selection and the pins, notice that. So I hid the marching ants and the pins as well. And now I’m going to zoom in on the image so that we can see that we have a very clean line here, I'll go and zoom back out to 100%.

A very clean threshold that is, between the unblurred bull, because it's not selected, and the blurred background. And we have no leaking of the bull into the background. If you want some leakage, if you want the bull to spill out a little bit, then you go on to the Selection Bleed option here. This is not available, by the way, this option is dimmed when you're working with a smart object, but it is available when we're working with the static effect. And I'm going to go ahead and crank it up to 100%, and you can now see that the bowl is leaking out into the selected region, so the edges of the bowl are actually blurring outwards.

Now, I don't want that much selection bleed, so I'll go ahead and take this value down to 35%, like so. And that's it. Make sure that your Bouquet values are both set to 0%. Or if you want to be doubly sure, then you can turn off this Bouquet check box, and then click OK in order to apply that affect. And we'll end up with this blurred background as you see here. And now you can go ahead and press Ctrl+D or Cmd+D on the Mac to deselect the image. All right, now I'll switch you over to another image that I've created in advance for you.

And I'll also switch to the Channels panel here. And you'll notice that there's an Alpha channel called Gradient that starts dark at the bottom, gets wide, not too terribly far from the bottom. And what that's going to do is it's going to protect the bottom of the beach. So I'll go ahead and Ctrl+Click or Cmd+Click on the thumbnail for that Alpha channel to load it as a selection outline. Then I'll switch back to the RGB image and return to the Layers panel. And the idea is that as the beach comes toward us, I want it to appear in sharper focus. So we want to blur the portion of the beach that's far away.

Those I'm working with the static background, I want to repeat the last filter I apply, so I'll just go ahead and press Ctrl+Alt+F or Cmd+Option+F on the Mac in order to bring back those settings. And notice that I can see the selection outline, the marching ants, but I can't see the pins. If I were to press Ctrl+H or Cmd+H on a Mac, I would reverse that behavior. So, I no longer see the marching ants, and now I bring back the pins. Anyway, I want to start from scratch. So I'm going to go ahead and click on this Remove All Pins icon, and then I'm going to create a pin right there at the horizon, like so.

And I'm going to the Blur value down to 10 pixels. All right, now, if you take a look at what's going on, what we have isn't a real, true blur effect. In other words, the beach isn't coming into clearer focus the nearer it gets to us. Rather, we're just reducing the opacity of the blur effect. So we're just getting a mix of blur and sharpness, which is not what we want. To fix that, you want to increase the Selection Bleed value to its maximum of 100%, and then you want to add another pin down here at the bottom and go ahead and take its blur value down to something like 5 pixels.

In that way, we are reducing the blur as the beach moves forward. Now, go ahead and click OK in order to accept that effect. Make sure that the Bouquet value is at 0%, and then click OK, and you'll end up with this effect here. Now, you want to press Ctrl+D or Cmd+D on the Mac to deselect the image. And the reason is that I want the entire beach to have a little bit of blur assigned to it, so we'll press Ctrl+Alt+F or Cmd+Option+F on the Mac in order to bring back the last applied effect. I'll select this bottom pin and I'll press the Backspace key or the Delete key on the Mac to get rid of it.

And then I'll select this top pin and I'll reduce it's blur value to 3 pixels, so we have just a little bit of blur going on down here at the bottom of the beach. And I'll click OK in order to accept that modification, and we end up with this final Depth of Field affect. And that's how you take advantage of Selection Bleed when applying a Blur Gallery filter as a static affect.