Using the Scale and Offset values 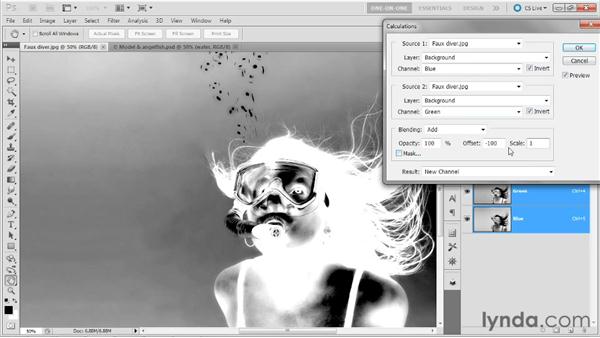 In this exercise, we'll take a look at the Offset and Scale values when combined with the Add Blend mode here inside the Calculations dialog box. I am still working inside that Faux diver.jpg file, gone ahead and chose the Calculations command, and we're working with Inverted versions of the Blue and Green Channels set to the Add Blend mode. As you can see, the result is much too bright, so we need to darken things up. And there is one of two options available to you here. One is to go ahead and divide the results of the calculation by the Scale value.

Now, by default the Scale value is 1, when you divide anything by 1, it doesn't change. However, if I take that value up to, let's say, 1.5, you can see that the image darkens up in the background. I am going to go ahead and take that value all the way up to its maximum, which is 2, and you can see that we're not only darkening the image, we're also mitigating its contrast a little bit, and as a result we're ending up with some soft organic transitions. However, we're not darkening up the background nearly enough, which is why we need to follow things up with a reduced Offset value.

I am going to click inside that Offset value and press Shift+Down Arrow, in order to reduce the value in increments of 10, and you can see that I'm darkening up that background quite a bit. So I'll go ahead and take it down to -100, which darkens up that background quite nicely. But you can see that we're also darkening the bright areas inside the hair. I don't want that. That's a function of the Scale value, by the way; If I go ahead and reset the Scale to 1, then I bump back up that contrast so that we have nice bright hair set against a dark background.

So the moral of the story is this. If you want contrast and you want sharp delineation between details, then you want to modify the Offset value. If you want less contrast, if you want to reduce the contrast across the board and you want to soften the transitions, then you increase that Scale value. In my case, this is the effect I want, a reduced Offset value of -100 and a default Scale value of 1. Now, notice that the areas inside the hair are still absolutely white, which might not make that much sense, given that I just reduced the Luminance of every single pixel by -100.

You'll recall that a Luminance level of 0 is black and 255 is white. So how can I subtract a big, huge value like -100 and still end up with white details inside of my Alpha Channel? And the answer is that the Add Blend mode had increased those Luminance Levels to beyond 255. So they were so very bright that taking them down a 100 Luminance Levels still resulted in white in the end, once again they are inside the hair. Now notice down here at the bottom of the dialog box, the Result says New Channel.

You can change it to New Document, if you want to send the Alpha Channel to an entirely new image. Or you can choose Selection if you want to create a selection outline instead. However, because we're building a mask, we want New Channel, so that we're creating a new Alpha Channel. Then you click OK and you create that new Alpha Channel here at the bottom of the Channels panel. I'm going to go ahead and rename that channel and I'm going to call it iG+iB, that tells me it's an inverted Green plus an inverted Blue set to the Add Blend mode, with an Offset of -100.

And then I'll go ahead and press the Enter key or the Return key on the Mac in order to accept that name. Now, you do not have to name your Alpha Channels that way if you don't want to. I have just found over time that it's very helpful to know how I arrived at a base Alpha Channel, in case I have to back up and repeat a step. All right! So that's how you create a base Alpha Channel using the Calculations command, combined with the Add Blend mode. In the next exercise, I'll demonstrate how to work with the Subtract mode.