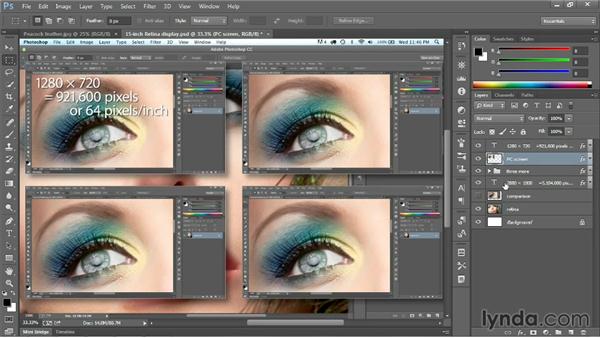 Photoshop now provides support for high DPI screens. Most famously, there's the Retina display from Apple, but there's also high DPI screens coming out from PC vendors as well. And even if you're not using one yet, you will be. I'm guessing these things are going to take over. The way LCD screens replaced CRT tubes. And just to give you a sense for the difference. I'm working on a pretty small screen. It's actually physically large, it's a 23-inch screen. But I'm working at a low resolution of 1280 by 720 because we need to keep these movies small so that they fit on your screen.

But anyway just to give you a sense here, I'm going to switch over to this other image, and I have a copy of this screen captured inside of this layered file. And so, I'm going to press Ctrl+0 or Cmd+0 on the Mac to go ahead and zoom out. Just to give you a sense for the difference between this screen. And the retina display that's included with my 15 inch Macbook. I'll go ahead and turn on this layer called Retina and you can see that it's quite a bit larger. In fact it at least four screens that I'm currently working on would fit inside of this dispaly.

Now, because I'm working at a resolution of 1280 by 720, and I'm going to go ahead and zoom in here a little bit, so that I have a crisper display. Because remember I was telling you that the non-incremental zoom levels are a little softer. And here we're looking at an image at 30.8 percent for what that's worth. If I zoom in to 33%, that text gets much sharper as you can see. Anyway, 1280 by 720 equals a total of nearly 922,000 pixels or a measly 64 pixels per inch.

Now you're screen is going to be closer to 100 pixels per inch maybe a little more. But the retina display by comparison, I'll go ahead and turn on this text layer and click and drag across these eyeballs to turn off the other layers there. The retina display on the 15-inch MacBook, just for the sake of, you know, comparison, is 2,880 by 1,800 pixels for a total of 5,184,000 pixels.

So more than five times as many pixels or a whopping 221 pixels per inch. And the resolutions actually get higher than that. And so, what that means is not only can I see the model's face at the 100% zoom ratio. Ntice that. But also if I zoom into 100% on this screen, we've got some incredibly sharp text, we've got these great tool displays as well. And again, for the sake of comparison, I've got this comparison layer right here. I"m going to turn off the text layer for a moment and turn on comparison, and that's what the tools look like on a standard display.

So it's not just a function of my screen only has 64 pixels per inch yours if you're using a conventional screen, has more like a 100 to, maybe close to 120 pixels per inch, but you're still getting these kinds of tools. Very jagged by comparison to the super smooth tools. And the super smooth text, which is even more obvious over here on the right-hand side. If I were to grab my move tool from the top of the tool box, and click on this comparison layer to make it active, and then drag this thing over, So we can see both of these layer panels side by side. You can see that there is a striking difference between not only the resolution, but the legibility of the text as well. So again a retina or other high DPI display may not be in your immediate future, but this is the kind of thing that's coming your way and is already available right now inside Photoshop.