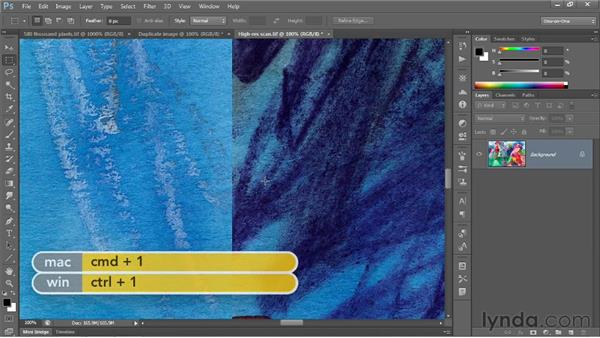 In this movie, I'll show you the difference between manufacturing pixels by upsampling in Photoshop versus capturing a high resolution high-quality image in the first place with your scanner or digital camera. I'm still working in that duplicate version of the low res image. I'm going to go up to the Image menu, and choose the Image Size command. I'll make sure that Resample Image is turned on, Constrain Proportion should be turned on as well. The Scale Styles option only matters for layer effects and we don't have any layers inside this image, so it doesn't matter.

Just make sure those final two check boxes are turned on, and then, let's go ahead and send that Resolution value through the roof. I'm going to crank this up to 1000 pixels per inch, which is way more than I need for printing purposes but great for demonstration, and then I'll go ahead and click OK. Now I'm still viewing the image at the 100% view size. However, I'm looking at some detail in the center of the image. So I'll press and hold the H key, click and hold, then drag up to the eyes of this Tyrannosaurus over here in the right-hand side, and release. You can see that we have some pretty gummy detail, but you might argue it's better than the original.

I'll go ahead and switch back to that original low resolution image. I'll drop down to this little zoom value here, and change it to 1000% so that we're equally zoom in on the image. So I'll go ahead and press and hold the H key, click and hold inside the image, drag over to the dinosaur's eyes, and release. Now because we're zoomed in farther than 600%, we can see the pixel grid, which are the lines between the individual pixels. The easiest way to hide those lines is to press Ctrl+H or Command+H on a Mac. And that way, we'll just be able to focus in on these pixels.

Now obviously, we have some pretty choppy transitions inside this low res image, whereas inside the upsampled version of the image, the transitions are a heck of a lot smoother as you can see. So we don't have that appearance of jagged edges. Of course, we can't see the individual squares as we can in a low res image. Even so, I wouldn't say that we have a particularly detailed graphic, whereas, let's take a look at a high res version of this image created by scanning the image at a high resolution in the first place. Notice I'm viewing the image at the 10% zoom ratio, so I am way zoomed out from this image at the moment.

I'm going to press Ctrl+1 or Command+1 on the Mac to zoom all the way in, and then I'm going to once again press and hold the H key, and drag over to the T-Rex's eyes like so, and notice the gorgeous detail inside this image. You can see the independent crayon lines, you can see all this edge detail associated with the water coloring, you can even see the paper texture. Compare that with the upsampled version of the file and you can see that real pixels captured with a scanner or digital camera just can't be beat, because the fact of the matter is when you upsample an image, Photoshop just has the original pixels to work from, and it can't make up new detail.

I want you to notice one more thing about these images. If I switch back to the zoomed in low res version of the graphic, you can see down here in the lower-left corner of the window that the document size is 1.66 Megs. If you can't see that value by the way, click on the right-pointing arrowhead and choose the Document Sizes option. That's a very small file in memory. Photoshop can easily handle files of this size with no delay whatsoever. Whereas, these other two files, both the upsampled version of the image, and the scanned high res version of the image are right at 166 megabytes in memory.

What that means is that you are going to have occasional delays while editing such files, especially as you add layers to them. As a rule of thumb, it depends on your system of course, but that performance threshold occurs around 100 megabytes, just so you know. But even now these two files are exactly the same size, and require the same performance hit where Photoshop is concerned, this file which has the same Resolution value of 1000 pixels per inch, does not contain nearly as much detail and this is a function of what's known as Spatial Resolution, which is how our eyes resolve the detail.

So this upsampled version of the image is said to have a low spatial resolution, where the high resolution scan is said to have a high spatial resolution, and that's what you want. So when in doubt, scan as many pixels as possible. You always want to go with the highest optical resolution that your scanner offers. And where your digital camera is concerned, you always want to capture at its maximum resolution as well, because what you want in your digital images regardless of where they're ultimately going, print or web, is as much detail as you can get.