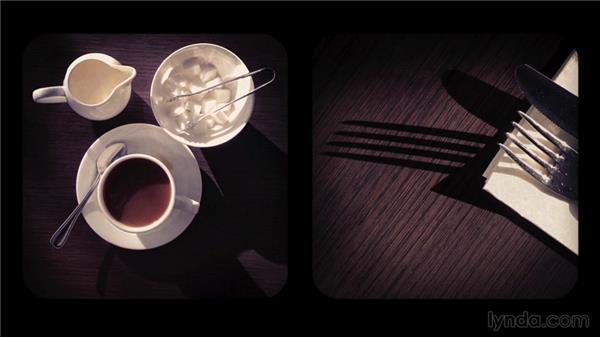 - Another way that we can unify multiple images either in a diptych or in a composite, is through line and shape. Here is a good example of using a curved line in one image to lead your eye from one image into another. Here, we're using straight lines, in this case, they're moving from the left hand side down into the Lincoln Memorial, but our eye is held within these two images with this line on the right that brings us back up to the top, we come across and we're moved back into the image to the left.

This illustration just demonstrates the difference between having vertical lines and horizontal lines. We can see on the left that the vertical lines have a lot more motion, they're more dynamic. The lines on the right, the horizontal lines are a lot more calming and still. Here I'm using shape, similar and repeating shapes within two images in order to unify them. Here again I'm going to use shape, but it's the repetition of shape, and even though they're flowers on one side and what looks like little dents in some metal on the other side, it's that same repetition of shape that unifies these two images.

We can also unify shapes by combining images where leading lines take you directly from one image to the next image, and actually create a third shape in and of their own. Here we have two images where we have the same shape in both images, we just have a lot more on the left hand side. But because we have more shapes on the left that are light, they can be easily balanced by adding the same or similar shape on the right as long as it's darker in tone.

Here again we're using shape, but we're varying the shape a little bit. So, it's a repetitive shape, but it changes both in size as well as color and tone. You can also unify images through color and tone. In this example, we're using complimentary colors or colors that are opposite of one another on the color wheel. And by using opposite colors, the eye actually goes back and forth between the two images. It also helps that they have the same amount of saturation, they are both very colorful images.

Here we've got the same color throughout both images, so the majority of the color here, in kind of this pinkish tone, is mimicked on the right hand side and this blue tone is picked up on the left hand side. Here we have two more images that are very similar not only in color, but also in tone, you'll notice that's there no deep black in either one of these images. So, they have the same quality of light. Neither one of them is making use of the entire dynamic range of the image, but it's going to help hold them together.

If one had a lot of contrast and the other didn't, we see those as being disjointed. Here's another good example of using tone in order to unify images. You can see again it's got the same lighting ratios on each image. Here we are using the full dynamic range, but you can tell for example, that the sun was not shining. It was taken on an overcast day so we have nice muted colors and there's not a lot of contrast. In this pair of images, you can tell that we've increased the contrast, but again, they have the same quality of light.

Basically the same lighting ratios. Here we've got two higher contrast images, but because they're the same, we're automatically going to unify them. You can also unify images through texture. So, here we have two very sharp textures. There is a lot of detail in the image to the right, but that's balanced out by a simpler image on the left, yet it's important that they both have that same amount of detail or sharpness. Here's kind of the opposite.

We have two images that are very soft. You can barely make out what's on the other side of the window. Here again I'm photographing a museum exhibit, but from behind the plexiglass, so we have nice soft shapes. They're kind of repeating a pattern that's going to help unify these two images. Here I'm used depth of field. Here on the left we can see that the image has selective focus. You can see that it's blurring in from the edges towards the center of the image and the same is true on the image of the right.

They also have the same quality of light or the same amount of contrast that helps unify them. Here we have an image that has lower contrast. It also has the same tonality, meaning that they've both been sepia toned and they both have movement or motion blur in the images to help unify them. Here we have two images that were taken with a digital camera that's been converted to infrared, so they have the same process look or the same style. You can also unify your images through balance or through the placement of objects.

So, her we have the image on the left that has the three bright lights. That diagonal makes those quite heavy, but they're balanced out by having a nice strong bottom heavy image over here on the right hand side of these vines. Here we have another pair of images. We've got a really high horizon on the left hand side, so a very strong horizontal line at the top. And then, we have a softer horizontal line on the image on the right, but it's that one piece of wood down there that's in the water that's going to balance these two images.

Here we have a photograph of a sculpture on the left which is actually quite large in the image. We need to balance that by moving the light bulbs on the right all the way to the edge of the image. If that string of light bulbs was in the center of the image, then the two images when they're put next to each other would be off balance and they would be weighted too far to the left. We should also be very conscientious about how many items are in our photographs. So, typically it makes sense to have an odd number of elements. Here we have the one bee on the left, we have the three bees on the right, even though they add up together to be four, it is still balanced because the bee on the left is so much larger than the three on the right.

Here we have another example of even and odd items, but when you put them together you actually have an odd number. What really works for me with this pairing of images, is the space between the objects. Both the negative as well as the positive space between all of the items. Finally, I just want to mention that just because you're combining images together, they don't both have to be the same size. So, here we've got two images so it is a diptych, but the one on the left, the horizontal image, is much larger than the image on the right.

So, there you go, a number of design principles that you can use when unifying your images together for compositing. 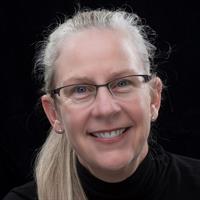 11/3/2014
By choosing elements that work together to form a cohesive message, Julieanne Kost is able to create a composite image that's more powerful than its individual parts. In this course, she shares the fundamental creative and technical concepts behind photo compositing, from creating diptychs that juxtapose images in separate "frames," to assembling multiple exposures and strengthening visual impact with textural information. With these simple yet powerful techniques, Julieanne shows how to pull together different imagery and create new, unified visual narratives.
Topics include: