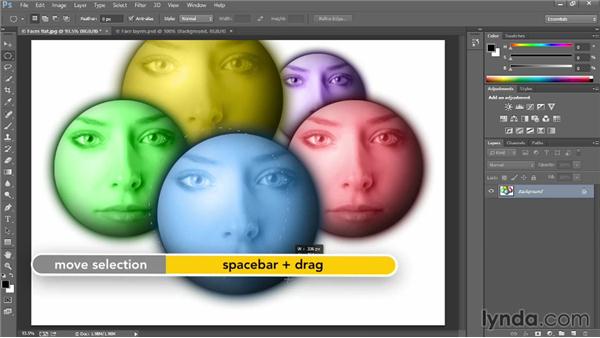 In this movie, I'll introduce you to two topics that go to the heart of using Photoshop, namely selections and layers. Notice I'm working inside of a file called Facesflat.jpeg. The fact that it's a JPEG file, tells you that it's a flat file with no layers in it, and you can confirm that over here in the layers panel, which by default, is located in the lower right corner of your screen. If you can't see the Layers panel, you can go up to the Window menu, which provides you access to all of Photoshop's panels, and then you would choose the Layers command.

Notice because this is a flat file, we're seeing just one item listed, and that's Background. The background is not a layer. It is rather, a fixed rectangle of a certain size, so a certain number of pixels wide by a certain number of pixels tall, and every single pixel is opaque. And so let's say then, that I want to take this blue circle right here and move it to a different location. Well if this were a real world object, obviously, I could just reach out and touch it and move it.

But because this is a flat image file, Photoshop can't really see the transitions between one of these circles and the next. And to give you a sense of why that is, I'll press the Ctrl+Space bar keys, or Cmd+Space bar on the Mac. And I'll drag to the right until I'm zoomed very far into the image to about 2400%, let's say. And now you can see what's known as the pixel grid. Which shows you that the delineation between one pixel and its neighbor.

And when we're zoomed in this far, you can see that the distinction between the pixels are a lot less than you might they would be. For example, this guy is a light shade of blue, and the one just above it is a darker shade. And the next one up is a darker shade still but there's still shades of blue. You don't start getting into the greens for another couple of pixels right here. And so this is the kind of edge, as it's known, that Photoshop can grab onto but it needs your help to figure it out.

So what I'm going to do is press Ctrl+0 or Cmd+0 on a Mac which in addition to fitting the image on screen also centers it as well. And then Ill go up to the select menu and choose the Deselect Command to get rid of that little selection I drew. Now probably the best tool for selecting this face would be the elliptical Marquee tool. And you can get to it by clicking and holding on the rectangular Marquee tool up here at the top of the toolbox, and choosing the elliptical Marquee from the fly out menu.

Next, you drag inside the Image window in order to create a selection. Now, you're going to have a hard time getting the selection lined up right in the first place, which is why you have a very useful trick at you disposal. If while drawing, you press and hold the Space bar, then you can move the ellipse on the fly like so, which is very helpful for aligning the selection. Then, when you release the space bar, you can continue to drag to scale that ellipse on screen. After you release you'll see an animated selection outline which is known as marching ants, and that tells you that you can now move the selection.

Now if you just drag inside the selection outline like so, you'll move the outline but not the selected image. So, to undo that move, all you have to do is go up to the Edit menu and choose the Undo Command. Or you can take advantage of the common keyboard shortcut Ctrl+Z here on the PC, or Cmd+Z on the Mac. To move the selected pixels, you need to switch to the next tool up, the one at the very top of the Tool Box. Which is the Move tool. And then, when you Drag inside the selection, you move it to a different location.

But notice what happens in the wake of the selection. You leave a background colored hole. And the background is, by default, white. And it's listed down here at the bottom of the tool box. And the reason that we're seeing white is because Photoshop has no idea of what should be here. It doesn't know that there should be a green head over here on the left hand side, and a red head over on the right hand side. And so forth. Let's compare that to working with layers. I'll just go ahead and press Ctrl+Z or Cmd+Z on the Mac in order to undo that move.

And I'll go up to the Select menu and choose the Deselect Command once again. Which has a shortcut itself of Ctrl+D, or Cmd+D on the Mac, and then, just so that we can compare things, I'll go ahead and press Ctrl+1, or Cmd+1 on the Mac, to zoom in. And now notice if I switch to this other file that I have open, facelayers.psd. It looks exactly the same as the other image. However, as we can see over here inside the layers panel, it contains layers. And native Photoshop documents, which end in the extension psd, can contain layers.

And so now, if I want to move the blue face. I need to first select it at the top of the layers panel by clicking on it in this list. And then I can drag it to a different location and I don't leave a background-colored hole this time because Photoshop is aware of these other layers that are inside of the image. In fact, I can even change its stacking order, that is to say, the order in which the layers sit on top of each other. Just by dragging this layer inside the stack, so if I want to move the blue face behind the red face, I just drag it down below red and drop it into place like so.

Now I don't mean in any way to suggest that selections are somehow inferior to layers. In fact, you often need selections in order to create layers in the first place, and selections and layers can work in tandem with each other. But now that you have a sense of what's going on with Selections and Layers, you're ready to start using Photoshop in earnest.