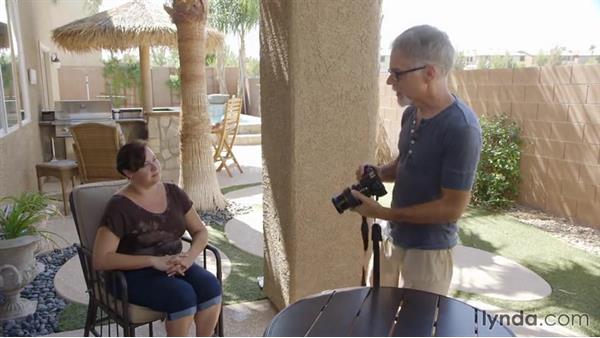 - While auto white balance will get you through most of your shooting chores, there will be times, like we saw in the last chapter where it's not gonna work that great and you're gonna have to take some more manual control. I said this before, I'm gonna say this a lot through this course so just get used to it. The trickiest thing about white balance, and it's not that tricky, is learning to recognize when you need to take some control. Any time your lighting situation changes you need to think about white balance. So I have left sunlight and stepped into shade, that's a lighting change. Yes, the sun it still our light source but now it's been modified by this shade.

It does that by picking a temperature of a certain kind. It might decide that the correct white balance here is 7,000 degrees Kelvin. A preset is simply a specific temperature that the manufacturer has already decided upon. I'm here working with a Canon Rebel. It's got a little range of white balance presets. I've got, in addition to auto white balance I have daylight, shade, cloudy, incandescent, fluorescent, flash and manual. On some cameras for fluorescent you're gonna see two or three different kinds of fluorescent because there are different kinds of fluorescent bulbs.

Since I'm in shade I'm just gonna choose the shady white balance preset and all that's doing is telling the camera, and it even shows me the temperature that it's picking, it's saying this is approximately 7,000 degrees Kelvin. That's what it thinks shade is. As long as we are actually in a lighting situation with 7,000 degrees Kelvin, we should be fine. We'll see what happens. I'm gonna frame up another shot, just like I did last time. I'm just in program mode, shooting. This is what I get with my white balance preset.

This is what happened with auto white balance. Look at the difference. The preset one is warmer, she looks healthier in this image than she does with the auto white balance one. Again, like I said in the last chapter, it's not that the auto one is bad, it's just that it could be better, and in fact it's so not bad that you may not recognize that it could be better until you see the better one. That's just something you're gonna learn over time. But again, you can think your way around this by always remembering, "Lighting change means I need to think about this.

"Shade means I need to try and do something." If this was a shade that was different than 7,000 degrees Kelvin, then that preset may not have worked very well. She might have ended up still a little too cool, or maybe gone too warm. She might have gone a little bit oversaturated. If that's the case, then it may be that the shady preset on my camera isn't set very well. Or it may be that this is not the particular shade that the vendor was trying for. With these presets, on any particular camera you've gotta experiment with them to decide if they're right. In this case if I was not liking the shady preset I might switch to the cloudy one because, one person's shade is another person's cloud, or something like that.

I'm don't know who said that originally. Probably no one 'cause it's really not much of maxim of any kind. But this is the cloudy preset. You can see that it is different from shade, it's not quite as warm. And I may decide that I like that better. And over the long haul I may decide that actually the shady preset isn't great, I'm always gonna stick with cloudy when I'm in shade. So, experiment with your presets. As we're gonna see later in this course, there might be times when you choose to use the wrong preset intentionally for creative purposes, to get an intentional color scheme. For the most part I don't use them that much, except when I come into shade.

There I find that they're really useful.

1/22/2015
Is accurate color important in photography? Accuracy is important for portraiture and product shots, but beyond that, all's fair in photography. A blue color cast could be just right in a photo of a winter snow scene or a dusk city skyline. And a yellow color cast might help convey the heat of a desert landscape.

In this course, photographer, author, and educator Ben Long explores the art and science of white balance and color temperature. Ben explores how to adjust your camera's white-balance settings, and what to do when auto white balance goes wrong. He then surveys some optional aids for white balance, and scenarios where "inaccurate" color may well be the right stylistic choice.
Topics include: