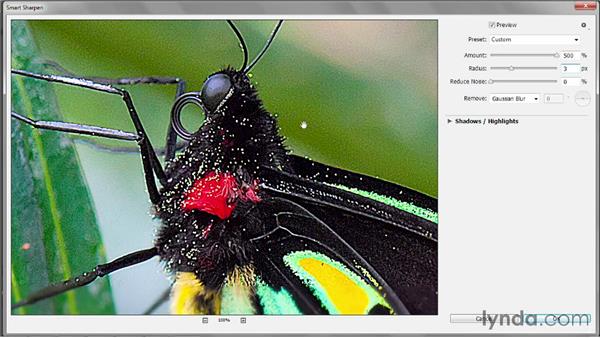 In this movie, I'll introduce you to the radius value, which goes to the heart of how sharpening works inside Photoshop. I'll start things off by double clicking on Smart Sharpen here inside the Layers panel in order to revisit my previous settings. And I'm going to expand the size of the dialogue box to take up the entire screen. So, we can just focus in on this 100% view, then I'll just go ahead and drag the butterfly until he's more or less centered inside the preview. Now, notice this radius value here, I'm going to take it up to 10 pixels so you can really see it at work.

So, obviously Photoshop can't reach back into your camera and generate new detail inside of a scene. So, what it does instead is it applies a kind of parlor trick. It searches for edges inside the image, which are areas of rapid luminescence. For example, the back of the insect's head right here is an edge Because of one side we have this bright green and on the other side we have this darkish, almost purple color at work. And then Photoshop exaggerates the difference around the edge.

And in doing so it creates these kind of halos. So, we have bright halos on the bright side of the edge and dark halos on the dark side of the edge. And our eyes end up reading that more intensified edge as a more sharply defined detail. And the thickness of the halo is defined by the radius value. So, if I were to crank this value up to its absolute maximum of 64 pixels, then I would increase the size of those halos as well. Now, big radius values can be useful when combined with lower amount values.

So, for example, if I take the amount value down to 100% and combine it with a maximum radius value of 64 pixels, then I end up getting what's known as clarity. So, if I click and hold you'll see that's the original version of the image and if I release that's the after version. And what we have now is more contrast around the edges inside the image. We can't see the halo at all however because its so very diffused and the amount value is relatively low. The other option is to go with a high amount value not necessarily 500% but I'm going to crank it back up there so we can see what's happening combined with the low radius value.

And one of your standard radius values for print is three pixels and we'll discuss that in more detail in the next movie. And I want you to notice something here. See how the preview didn't quite finish drawing? We've got the top of the image previewed and then this area down here is not sharpened at all. And if that happens, if you want to force Photoshop to redraw that preview, then just click and hold for a moment to turn the preview off. And then release in order to turn it back on. And notice Photoshop went ahead and drew in the sharpening down here at the bottom of the preview.

Alright. Now, I'm going to take this radius value down and you can reduce the radius in whole pixel increments by pressing Shift+down arrow. So, Shift+up arrow takes the value up a pixel, Shift+down arrow takes it down a pixel. So, this is what things look like when the radius is set to two. This is how things look when the radius is set to one and notice that we're not seeing the halos to the same degree we were before and that's because we have such a small radius value. So, small radius values translate to tight halos, which go largely unseen, but still have an effect on the image.

Now, at this point I can still reduce the radius value if I want to by pressing just the down arrow key without shift. And either the up or down arrow key by itself, is going to raise or lower the radius value in increments of one tenth a pixel. And you can take this value down to as low as 0.3 when Remove is set to Gaussian Blur. Any lower and you're not going to see a difference. And that's strictly when working with Gaussian Blur. We'll discuss the other options in a future movie.

So, I'm going to go ahead and zoom on in here by clicking the Plus button a couple of times and I just want you to see the difference if you can. This is the before version of the image, unsharpened. And this is the after version with the amount cranked up to its maximum of 500%, and the radius set to its minimum where Gaussian Blur is concerned. You can go lower to 0.2 for example, but then you're going to lose the effect entirely. Notice if I click and hold and then release, we're not seeing a difference. Alright. For now I'm going to take this value up to 1 and then I'll click OK in order to apply that effect.

And if I zoom in here, just to give you a sense of what we've achieved, you can turn off the smart filter by clicking on it's eyeball there. And that way you'll see the before version of the image. Then if you turn the eyeball back on by clicking the front of the filter, notice that it takes a moment to apply. Here's a better way to go if you want to see a before and after. Turn off the smart sharpen filter to see the before and then press Ctrl+Z or Cmd+Z on the Mac to see the after version. And notice by virtue of the fact that I'm undoing instead of turning the filter back on, Photoshop is able to show me the effect much more quickly.

Alright. So, that's how the radius value works. At this point you might figure well, this is a lot of really interesting information but what am I supposed to do with it? Which is why I'm going to answer that question in the next movie.