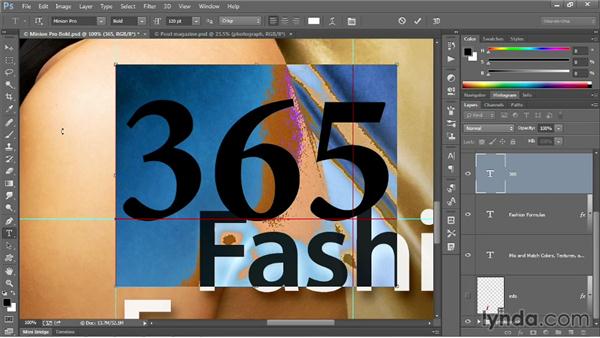 In this movie, I'll show you how to change the size and color of selected text in Photoshop. Notice that I'm zoomed in on the word 365 here, and let's say I want to increase the size of these numbers. Then, I'd switch to the Type tool, which you can get by pressing the T key. And then notice that we've got a type size option up here in the Options bar, and I can select from a preset by clicking on this pop-up menu and choosing, for example, 72. Or I can dial in my own custom value just by clicking on these Ts and entering a value such as 100. Now, by default, Photoshop measures text in points and that means that the type size is relative to the resolution of the image. For example, if I were to go up to the Image menu and choose the Image Size command, and then I turn off the Resample check box just because I don't want to change the number of pixels inside the image. And I'll reduce the resolution value from 240 pixels per inch to 72. And then I'll click OK. You can see now my text is 333.33 points and that's because if you divide 240 by 72, you get 3.33 repeating.

I'm going to go ahead and press Ctrl+Z or Cmd+Z on the Mac to undo that resolution change. Now I'll see that the type size is once again listed at 100 points. If you prefer to work in pixels, you can dial in a value such as 400 px, so you just have to enter px afterward to let Photoshop know that you're working in pixels. Press the Enter key and it goes ahead and translates that value into points. If you always want to scale your text in pixels, then press Ctrl+K, or Cmd+K on the Mac, to bring up the Preferences dialogue box. Then, click on Units & Rulers and notice right here, you can set Type to Pixels instead, which could be very useful to you if you spend a lot of time doing web work. I'm going to cancel out though because I prefer to work in points.

Now, at this point, I want to move my text down and to the left so it snaps into alignment with this guide intersection right there. If you can't see the guides, then press Ctrl+semicolon, or Cmd+semicolon on the Mac to bring them up. Then grab the Move tool and drag the letters, like so, so that the bottom left of the 3 snaps into place. Problem is, that's not exactly what I want. If I press the T key to switch back to the Type tool and I click inside the text, notice this point right there, the alignment point for this point type, is not where it should be. I want that point to be right there at the guide intersection. And you can do that, notice if you move your cursor out from the text, it changes from the I-beam cursor to a Move cursor. And once you see the move cursor, you don't even have to drag directly on the point or on the text at all. You drag off the text like so in order to move it into place. All right, now let's say you want to scale the letters incrementally.

Then press Ctrl+A, or Cmd+A on the Mac, in order to select all the letters like so. And you'll see that it appears that part of the word Fashion is selected. That's not really the case. Only the numbers are selected. The reason that this highlight area drops down so far and goes up as far as it does is because Photoshop is automatically accounting for the longest descenders and the tallest ascenders associated with this font. Now, if you want to be able to see your text without the highlight, you can press Ctrl+H, or Cmd+H on a Mac. The letters are still selected. It's just that the highlighting is deselected.

That's Cmd+Shift+Option+period on a Mac. And to reduce the size of the characters in five-point increments, you press Ctrl+Shift+Alt+comma, or Cmd+Shift+Option+comma on the Mac. I'm going to press whatever keys I need to in order to take the size of these characters up to 192 points, like so. And now, I'll press the Control key, that would be the Command key on a Mac, while scrolling down with my mouse in order to center those characters. And I might zoom out a little bit as well. Now, let's say you want to change the color of the text. You can do that in a couple of different ways. One is to click on this little color swatch. And by the way, my text is still selected. I could press Ctrl+H, or Cmd+H on a Mac, in order to bring back my highlight.

But you're not going to want to see the highlight when you're changing the color of the text because the color gets inverted. So even though the text is white, it's appearing black in the highlight. So I'll press Ctrl+H, or Cmd+H on a Mac, to hide that highlight. And then I'll click inside the color swatch to bring up the Color Picker dialogue box. And now, I can change the color to anything I like, such as this shade of green, for example, and then click OK. But what I really want to do is change it to the color of her lipstick. So I'm going to go ahead and zoom out, to press Ctrl+0 and it really took me far out there. And I'll zoom back in so that I can see the text and her lips at the same time. Scroll down a little bit as well. Click on that color swatch and then just move your cursor outside the Color Picker dialogue box and click on the color that you want to lift.

Another way to work is to switch to the eye dropper, and you do it by clicking on the eye dropper, as opposed to pressing the I key. Because if you pressed I, you would change the text from 365 to I instead. And then you can click on any color in the image to lift it. For example, i'll lift a color from her flesh. And then, once you've changed the foreground color, press Alt+backspace, or Option+Delete, on the Mac in order to recolor those numbers. But I'm looking for a color more like this, bright color inside of her lips, and I have a very specific color in mind. Here inside the Color panel, make sure that the HSB sliders are up. And I'll take the Hue value down to 5 degrees. And I want the Saturation value to be 90. And I want the Brightness value to be 75, like so.

And then, I'll press Alt+backspace, or Option+delete on the Mac, in order to recolor those letters. And those are the many different ways to change the type size and color of text here inside Photoshop.