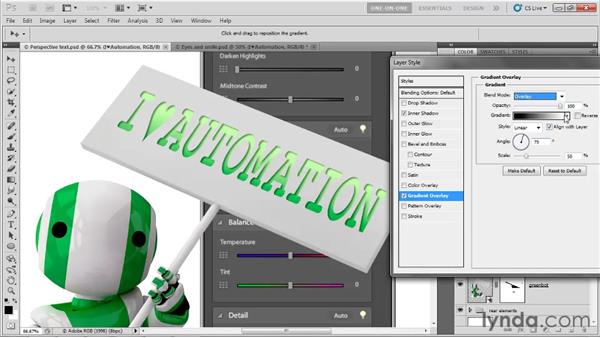 All right gang, I think I have managed to achieve a pretty good match between the angle of my text, at any rate, and the angle of the sign in the background, and I've saved my progress as Perspective text.psd. In this exercise, we are going to go ahead and blend these letters with the sign so that they appear to be genuinely superimposed. So here's what I am going to do. I will make sure that the, I (love) Automation shape layer is selected, then I will drop down to the fx icon, and we will start with an Inner Shadow, so that the characters appear to be carved out of the sign, and the default settings are actually not half bad.

Multiply is the Blend mode of choice here. An Angle of 135 degrees suits us just fine. We might as well leave Use Global Light turned on. We've got a Distance of five pixels, a Choke of zero and a Size of five pixels as well. That is all copasetic by me, and that's it. Now there is one other thing I want to do. I want to add a little bit of gradation inside of these letters. So I would like them to appear little darker toward the bottom than they look at the top. So normally what I do is add a Gradient Overlay, but the problem with the Gradient Overlay is it's going to be sized to fit the entire image, and I really just want to size it to fit the text, and I want it to be of the same angle of the text and predicting that is pretty tough, frankly.

So I could sort of monkey around with this until I got a good direction, like, let's say 65 degrees obviously isn't right. So, let's go ahead and increase that value, and that's pretty good, but notice I'm not going from black to white which is what I'm seeing here in the Gradient bar. I'm going from darkish to lightish. So the Gradient is much larger than this text, so I have to go over to this Scale value and reduce the Scale in order to compress the Gradient into the text and then I see that the Angle isn't right anymore and I increase the Angle a little bit still, oop, too much, take it back down.

I can also drag the Gradient if I want to, so I could drag it up and down. And actually after a certain point, what I am proving to myself here is ultimately you can get it right, if you spend enough time, but there's potentially an easier way to work. So you can work numerically like I'm doing here. Go and drag this guy around, fuss with it, until you get exactly the results you're looking for and then go to the Blend mode, and bear in mind we are just applying darkness and lightness. We are not applying black-and-white, because we are going to change the Blend mode from Normal to Overlay, so that we get this effect here, and then we're going to reduce the Opacity of that effect.

I will probably take it down to 30%, something like that. That looks pretty good, and then I will Click OK. And that actually eliminates my next step. Because what I was going to do is Brush onto this text, which I like better. I still like that technique better because it gives me a little more hands-on control. So let me show you what that looks like. For those of you who love Gradient Overlay and you found that to be useful, great. You've got it. You can skip the rest of this exercise and move on. Those of you who would like to see another way to work, turn Gradient Overlay off, and just leave Inner Shadow on.

We definitely want the Inner Shadow effect. And we are going to create a new layer by pressing Ctrl+Shift+N or Cmd+Shift+N on the Mac, and I'm going to call this brushwork and then turn on Use Previous Layer to Create Clipping Mask, and click OK. So we've got a clip layer sitting on top of this vector-based I (love) Automation layer. That way we will be brushing exclusively inside the letters which is what we're about to do. Now grab the Brush tool, which you can get by pressing the B key if you like, and make sure your Foreground Color is set to Black for the moment.

So just press D for the default colors. And notice that I have a pretty big brush going on here. If I Right Click in the Image window, you can see its set to 300 pixels, so pretty huge. Hardness 0%, very important and here's how I'd like you to paint, just click toward the bottom of the eye there, like so. Then I want you to go over to the bottom of the N and Shift+Click so that you create a straight line of darkness along the bottom of the text. Now press the X key in order to switch your Foreground color to White, and I want you to click about here, sort of above and to the left of the eye in order to apply some brightness there.

And then I want you to Shift+Click above and to the right of the N, about right there I'd say, and you'll create a straight line of white across the top of your letter. So this takes a lot of the guesswork out of that Gradient. We are still creating a kind of black- and-white gradient, we are just doing it with a couple of brushstrokes instead, and now check out your brushwork layer thumbnail right there. You have got a line of white and a line of black, at least that's what I have. Now I am going to change the Blend mode for that later to the exact same Blend mode we used just a moment ago, for the Gradient Overlay effect which is Overlay.

When I choose the mode, I get this effect here, so pretty similar to what we were seeing with the Gradient Overlay. Again, I just felt like I had better control this time around. And now I will press the Escape key, here on the PC, so the Blend mode is no longer active. I will switch back to the Marquee tool by pressing the M key, and I will press 2 key in order to reduce the Opacity value to 20%, and this is what the text looks like without that brushwork layer, and this is what it looks like with the brushwork layer. So you can see it just adds a little bit of balance, and you know what? I'm thinking too little.

I am going to the 3 key to raise that Opacity value to 30% which gives us little bit of additional brightness. So now the text, at least to my way of thinking, looks like it's integrated into that sign. The next step is to give this cute little robot some wicked scary teeth.