Turning a small image into a huge one 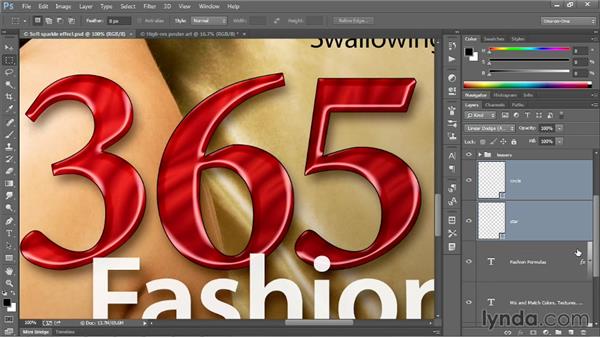 Now let's say you want to take your magazine cover, which measures almost eight inches wide by 11 inches tall and you want to turn it into a piece of poster art that measures 30 inches wide by 40 inches tall. Well, the answer is to up sample the image using the image size command. And whereas up-sampling is an iffy proposition when you're working with pixel-based images. Because regardless of the interpolation method, Photoshop ultimately has to average the existing pixels inside the file. When you're working with resolution independent vector-based text and shape layers Photoshop is working from the mathematical path outline definitions, meaning that you always get razor sharp results.

The first step is to protect the original image by going up to the Image menu and choosing the Duplicate command and I'll go ahead and call this guy High-res poster art. Do not turn this check box on. We need access to all the original text and shape layers in order to accurately scale the image. Then click OK. Now I'll go ahead and zoom in a little bit here. And the next step is to go up to the image menu and choose the Image Size command, or you can press Ctrl+Alt+I, or Cmd+Opt+I on a Mac.

Be sure to turn on the re-sample check box. And you can go with automatic if you like, it doesn't really, actually matter where the text, and shape letters are concerned because they're not being interpolated. Only the background image is going to be effected by this option, and you might as well go with automatic because that way Photoshop applies preserve details. Next you want to switch to inches, and make sure your width and height values are linked together, and go ahead and increase the width value to 31 inches, and that'll take the height value up to 43 inches.

I'm also going to increase the resolution to 300 pixels per inch. And then finally, you want to go up here to the little gear icon, and make sure Scale styles is turned on. That way, Photoshop will do its best to scale the layer effects inside the composition. Now, I'm going to scroll over here, kind of lost in this woman's pearls right now, so that we can see the Text layers and it looks as if I'm a big liar, right, because we're not getting super smooth results. We're getting your standard preserved details interpolation.

And that's because the image size command is not previewing the text and shape layers properly. They are going to render out super smooth you'll see that in a moment. In the meantime, go ahead and switch width or height. Back to percent so we can see just how much we're increasing the size of this image. And it turns out its by a factor of 500%. Well it's actually more then that, we're increasing the width by 500%, and the height by 500%. And 5 times 5 is 2500%, meaning that for every one pixel that we use to have in the image we're now going to have 24 more.

And as a result, we're dramatically increasing the size of this file. To make it happen, go ahead and click on the okay button. Now its going to take a few moments for Photoshop to do its thing. Because after all this is a fairly complex document with quite a few different layers and layer masks and so forth. Now just so I can better navigate I'll go ahead and bring up my Navigator panel and I've increased it's size a little bit so I can see a bigger thumbnail. And I'm going to go ahead and drag this red square down and notice there's that text that was appearing so choppy inside the Image Size dialogue box, but it looks great once it's actually rendered here inside the Image window.

And I'm not even viewing the image at 100%. I could press Ctrl+1 or Command+1 on a Mac. So that I can see one image pixel for every screen pixel and everything is absolutely razor sharp. Lets go ahead and check out the layer effects and see how they're holding up. I'll scroll over to 365, here inside the Navigator panel and then I'll press Control minus or Command minus a few times in order to zoom out so I can see all of the text, and I'll hide the Navigator panel as well. And then I'll switch back to my original image and zoom in on its 365, and notice that the pattern isn't quite working out.

So, we've got a big pattern inside the original image, and we've got a smaller, tighter pattern inside the new image And that's a function of this. I'm going to go ahead and scroll down my list of layers here and click on 365 expanded as well and I'm going to start by double clicking on the stroke. And notice that the stroke is set to two pixels and that'll become important in just a moment. Now I'll switch to Pattern Overlay, and notice that it's scale value is set to 400%. So if everything goes the way it should then the strokes should scale from two to ten, because 2 times 5 is ten.

And the Pattern overlay should scale from 400% to 2,000%. So I'll go ahead and cancel out here. Switch over to my big poster art. Find it, 365 layer, twirl it open and double click on its stroke. And sure enough the stroke is scaled to ten pixels. And it's got a lot of headroom notice that there's an awful lot of slider bar available, so it could get a lot thicker than that. Whereas if I click on Pattern overlay. Its scale value is maxed out at 1000%. So the scale value does not go to 200% where the pattern is concerned, meaning that we're faced with one of two options.

Either we can redesign the pattern, so it's larger or we could just accept things the way they are, and I'm inclined to do the latter, because after all it looks pretty great. Now, the one thing that did not scale is the sparkle, and that's because Photoshop didn't even make any attempt to scale the sparkle. Whereas, in the original image, go ahead and scroll over to it. The sparkle is nice and soft, if a little jagged when I zoom in to 200%, it's awfully brittle inside the new image. And that's because Photoshop doesn't automatically scale that feather value.

And what's great about this is it's not even jagged the way it was in the PDF file. We have a nice, smoothly rendered sparkle. One more thing I want to show you because I just think it looks awesome. I'm going to scroll up to her hair. And notice that her hair is kind of, lumpy. And that's because it was interpolated using that Preserve Details function. But the text in the background is once again razor-sharp. And the interaction between the hair and the text looks absolutely great. Notice what fine detail we've managed to keep.

Alright next what you probably want to do let's say you are done, you have checked everything in the file it's all working out absolutely brilliantly. There are no problems left then you probably want to go ahead and flatten the image because after all notice down here in the lower left corner. Of the image window. The size of the file flat is 343 megabytes with layers it's almost a gigabyte. So if you don't need the layers, then you should probably get rid of them. And you can do that by going up to the layer menu and choosing flatten image.

When Photoshop asks you if you want to discard the hidden layers, go ahead and click OK. And this may take a few moments, because again, its a complicated file. Then switch over to the Channels panel and lets get rid of that alpha channel by dragging it and dropping it on the trash icon. Now, to save the file. Go up to the File menu, and, because we duplicated it, it has not been saved before so you can just choose the Save command, or press Ctrl+S, or Cmd+S on the Mac. This file doesn't contain any layers, no alpha channels either.

And so the best way to retain all the detail inside of a flat image is to select the TIFF format, and then, go ahead and click on the save button. When the TIFF Options dialog box comes up. Make sure Image Compression is set to LZW, because that lossless compression is going to reduce the size of the file from 340 megs in memory to just 66 megs on disk. You can leave the other options as is, and then click on the OK button in order to save off that file. And that's how you transform a magazine cover into a work of poster art by scaling the resolution independent vector based text and shape layers here inside Photoshop.

Video: Turning a small image into a huge one