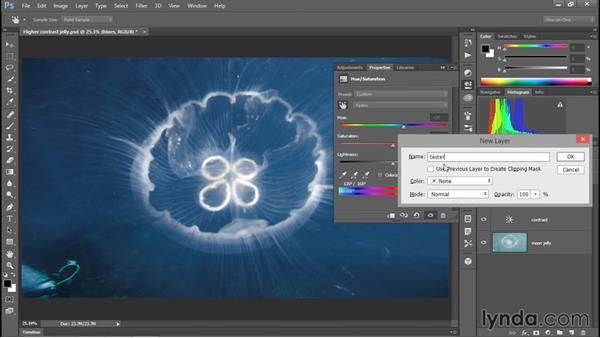 - In this movie, I'll show you how to turn the ocean a more representative tropical Caribbean blue using a combination of hue saturation and levels naturally applied as nondestructive adjustment layers. Now first thing I wanna show you is notice that this adjustment layer that I created in the previous movie does not have an automatic layer mask. I'm very opposed to automatic layer masks because they tend to get in the way, they clutter the panel, they prevent you from being able to read the name of the layer and so forth. If you agree with me and you want those off, go to the Adjustments panel which you can also get by going up to the Window menu and choosing the Adjustments command.

Then go to its flyout menu here in the upper right corner. Click on it and turn off this command Add Mask by Default. So if it's got a check mark in front of it, you wanna choose the option to turn it off. In my case, it doesn't so I'll just leave it alone. At this point we wanna create a hue saturation layer. As long as I have the Adjustments panel open I can click right here on the hue saturation icon. Or if I wanna name the layer as I create it, I could press the Alt key or the Option key on the Mac and click on this icon.

That will bring up the New Layer dialog box. If you loaded D keys, then you also have a keyboard shortcut which is Control-Shift-U on the PC or Command-Shift-U on the Mac. I'm gonna go ahead and name this layer Blues and then I'll click OK in order to create the new layer and bring up its settings here inside the Properties panel. Then I'll select the Targeted Adjustment tool which is this guy right there, the one that looks like a pointing index finger with a couple of arrows next to it. Now there's two ways to use this tool.

One is to drag on a color inside your image and then if you drag to the right, you're gonna make that color more saturated. If you drag to the left, you're gonna make it less saturated. We don't want that, so if you're following along, go ahead and press Control-Z or Command-Z on the Mac to undo that change. Instead, we want to cycle the hue. To do that, you press and hold the Control key or the Command key on the Mac. Then you would drag here inside the ocean either to the left to make it more green or to the right to make it more blue.

If you take a look at the hue value there inside the Properties panel, I'm changing the hue value on the fly. Now I'm looking for a hue value of plus 20. That seems to work well for this image. Notice that I'm affecting the cyans independently of all the other colors. Now this image doesn't happen to be super colorful but that is going to ensure that we affect the ocean and only the ocean independently of any other colors inside the image. Next what we wanna to do is add a Levels Adjustment Layer and here's why.

At this point it's difficult to tell if we've blown any highlights or if we've made our shadows too dark. You could check out the histogram by going up to the Window menu and choosing the Histogram command and that will show you what the histogram looks like here inside this panel. You can also change its size if you want to. You can choose expanded view, for example, or what have you. However, you can't really modify that histogram, whereas, you can using a Levels Adjustment Layer. So I'm gonna create such a layer either by switching over to the Adjustments panel once again which, in my case, is right next door.

Then you could Alt or Option click on this Levels icon right there, the second icon on the top row, in order to bring up the New Layer Dialog box. Or if you loaded D keys, you've got another keyboard shortcut, Control-Shift-L or Command-Shift-L on the Mac. Either way you'll bring up the New Layer dialog box. I'm gonna go ahead and call this guy Tester. This is something I frequently do inside of my images. What it allows me to do is test where the highlights and the shadows are and I'll show you how that works.

First, click Okay in order to bring up the level settings here inside the Properties panel and then notice we can see a white on black version of the histogram. If you want to see it a little more clearly, then you can drag the bottom left corner of this panel in order to expand it. Next, what you wanna do in order to see where the highlights are, go ahead and press the Alt key or the Option key on the Mac once again. We're always pressing that key inside this software. Then drag on that white triangle on the far right side of the histogram.

Now as you drag, you're gonna see the colors that are getting clipped, they're inside the image window. Anything that's black is not getting clipped at all. Anything that's white is getting totally clipped. So white is a big problem. Otherwise, all the way over here at 255, notice, we're seeing yellows, reds and greens. Reds show us what's happening in red channel. Green shows us what's happening in the green channel. Yellow is an overlap of red and green. So we have a little bit of clipping happening in both the red and green channels but not in the blue channel, which is a really good sign.

Now I don't wanna change this white point setting. You wanna leave it set to 255. But we are missing some shadows as you can see over here. To bring those shadows back, go ahead and press the Alt key or the Option key on the Mac once again, and drag the black slider triangle, the one on the left-hand side, over. As long as you see white, nothing's clipping to black. But as soon as you start seeing colors, we're getting some clipping. So, for example, and this is a little difficult to wrap your mind around. If you see cyan, then that means you're clipping in the red channel because cyan and red are color complements.

I know that's weird but that's how it works. Where we see blue, notice there's some blue right there in the far lower left corner of the image. That means were clipping yellow, which is a combination of the red and green channels. But were not clipping blue, so far. That's the one channel were not clipping. Once we finally start seeing black, that means were clipping in all three channels which is a very bad thing. I'm gonna take this back until we have a little cyan clipping, meaning that we're clipping in the red channel only. That happens at a black point value of 25.

Now that leaves the image far too dark in my opinion. We're losing a lot of the details inside of the moon jelly. So I need to change the gamma value which is this central one right here. It controls the midtones independently of the blacks and whites inside the image. Now I don't know if you know this trick or not. Let's say you want to select one of these values here inside the Properties panel. But you want to do so from the keyboard, then press Shift-Enter here on the PC or Shift-Return on the Mac and that will select that first value automatically for you.

What's interesting about this is that this was a suggestion from a member of my site, Deke.com. Adobe actually sought and implemented it without even talking to me. All right, next I'll tab over by pressing the tab key to the gamma value, the central value right there. Then I'll press Shift-up arrow, a total of five times in a row, which changes that gamma value to 1.5 and dramatically brightens up the midtones inside the image. Now, because I'm done with the Properties panel, I'll go ahead and click this double right arrowhead icon in order to hide it.

All right, now I'm gonna just go ahead and zoom in on the image by pressing Control-plus. Just so you can see how much we were able to accomplish over the span of this movie, I'll press the F12 key in order to revert the image to its original saved appearance. So this is what the image looked like at the beginning of the movie and this is what it looks like now. Complete with its rich, royal Caribbean blues, thanks to the power of two of the oldest functions in Photoshop: hue saturation and levels, working together as nondestructive Adjustment Layers.