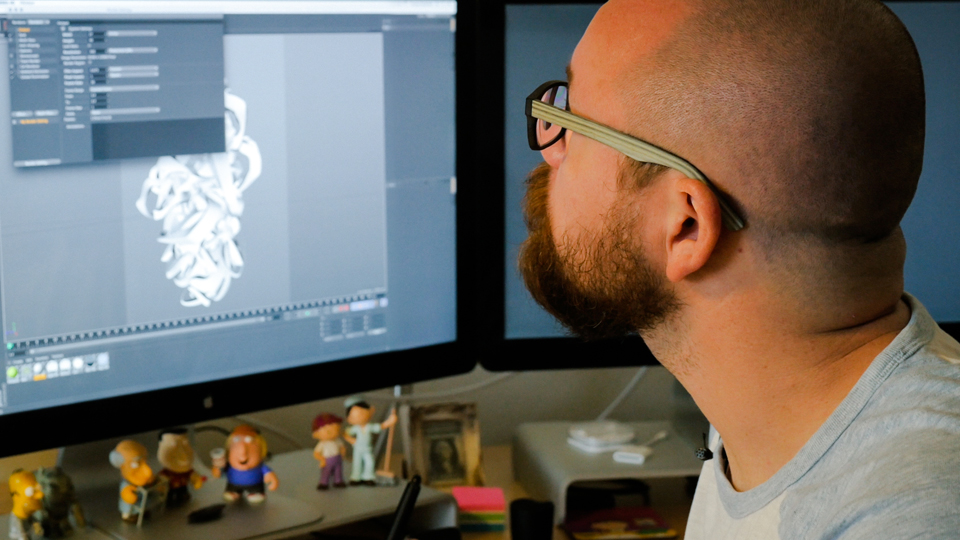 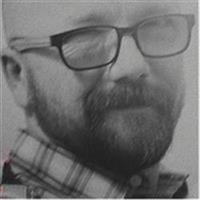 5/20/2015
Photoshop turns 25 in 2015. In honor of the occasion, movie poster designer Tomasz Opasinski creates a unique 3D birthday card for Photoshop. He uses an amazing piece of 3D graffiti he created in CINEMA 4D and uses Photoshop to reimagine it: changing the lighting and shadows, introducing some storytelling elements, wrapping type onto the balloon, and making the whole look more organic with filters. Follow along as Tomasz explains how he took his poster-size love letter to Photoshop from start to finish.

(slow electronic music) - My name is Tomasz Opasinski, and I am a movie poster designer. I moved here from Poland, and I've been doing this for 13 years. When I first started with extra graphics was on Commodore 64, so these are like ancient times, and there was no Photoshop. There was just Paint, 8-bit, and then Photoshop. And that was instant love and I was like okay, this is the program for me. I understand it. I can relate to it.

If you're really proficient with it, you can illustrate your thoughts, and this is really important. Whatever is in my head, I can create. If I just have images or I can illustrate elements or shoot it or create it in a CG, I can all merge it later on in Photoshop. So it's perfect. With the movie posters, what we're witnessing right now is more and more CG, and this is the artwork that we have to create. Special effects are not done yet. So if you think about it, like a year before the movie comes out, I have to have a poster ready, so I have to create everything by myself.

Before there was just a, okay, shot from the movie, let's change the background. But right now we have to create this background. We have to paint those buildings or we have to extend them to something. We have certain, I don't know, sketch to based on, but we have to make it photorealistic, and that's where artistry and real use of Photoshop comes up. (upbeat electronic music) The use of 3D grows exponentially, and that, it's actually really good thing about Photoshop handling 3D because I can render, I can extrude.

I'm able to create something really unique. I can create metaphors for films, but they're not stock images. They're nothing that can be easily find, so they're really unique. It's the ability of importing the 3D. It's really a blessing. It's really cool stuff. For the Photoshop poster, the initial idea was to create something hybrid between my 3D graffiti and the tribute to Photoshop's 25th anniversary.

So initial idea was to take my 3D graffiti-like graphics and repurpose it almost for this poster. Somewhere in the middle, the idea came to me that this can be a huge balloon and if we just add the one person on the bottom holding it, it may shift this whole idea towards something I think more interesting. So it all started with a 3D object from Cinema 4D. What happens is I'm extruding abstract shapes and then from those abstract shapes, I'm creating something bigger that was literally an extrusion of, I don't know, a few hundred different rectangles and squares.

So I created a sort of spaghetti of 3D objects that were overlapping and going behind and in the front to create this sort of like ice cream kind of shape thing. So it's somewhere between balloon and ice cream I think. Once I had the 3D object, I did open in Photoshop as an OBJ. You have options of moving the ground, changing the angle of the light or density of the shadow or softness of the shadow. So for me I chose literally like a soft shadow on like maybe 30, 40 percent so it's not too harsh.

And it's not that I'm literally cheating, but I'm using this as a tool. This is a tool and that helps me to achieve what I want to achieve in the quickest time possible. Knowing that balloon by itself won't say much or enough for this poster, I decided to embed on 25 as a main theme on it. So it started with a green 25 just for me to see where the 25 is overlapping with my object, and if it's overlapping the correct way.

At some point I was presented with the challenge of wrapping the type on this 3D object. So one of the filters I used for that was displace. In displace, you decide how many pixels right or left you are going to displace the image with another image that is basically black and white. I use this trickery actually because it's a visual trick. It's not perfect. It didn't go actually in 3D anywhere. It was just a trickery of using bright and dark spots on it to create this illusion of this wrapping stuff.

So it was the quick way for me that saved me a few hours of drawing and painting here and there. And I think it worked perfectly. The idea of the balloon by itself is good, but I thought that someone has to hold it. It doesn't make sense when the balloon is just floating there by itself. So I thought about maybe a person can hold it and how big this person will be in comparison to this big mega balloon, let's put it, Zeppelin almost like balloon. What I did, and I used a really low poly person, and placed it there, rendered in Photoshop, and faked just a little string going towards the balloon.

And it's just a few polygons here and there just to create this illusion of a person being there. And that was my goal just to have something that reminds us of human being silhouette-ish thing but without going into details, buttons, and zippers and shoes. At some point I had this whole composition, the whole person holding the balloon and 25 done, and there was something missing. What was missing was the human touch a little bit.

It was too crisp, too CG, and what Photoshop does, it helps me to shift it a little bit. Shift it from this pure CG with the super sharp edges and nice reflections towards something more, I don't want to call it handmade, but something more organic, let's put it this way. First thing was to use two or three layers with the stock images. One was the paper like stock image and then there was the two different layers with the images that I took years ago.

It was just with the lighting, with the light bursts. It has little particles here and there to break this clean feel that I didn't want to have. It adds the atmosphere a little bit so it's somewhere there. There's something in the atmosphere. I did one pass with the oil paint. And what oil paint does, it literally blends edges in such a nice, organic way that really feels good to me. I'm using filters in a really subtle way. They go to maximum like this oil paint. I did maximum of any slider there.

But later on they are dimmed down and masked and used in parts they really need to be used. I'm not using this on the whole image because it will look filter like, let's put is this way. So I'm using it in a smarter way. I'm just using it when the filter is really needed. Another filter I used was poster edges and what it does is it creates like a dark edge, almost like comic book feel to it. I have to make a statement with those edges because they're such beautiful edges, and I felt they were getting lost without having any accents on it.

But I did mask and I masked this in certain areas so if you look at the poster towards the bottom, there was more of those edges to simulate heaviness of this object, and where it's light on the top left, there was less of it. So I applied those filters in an intelligent way, I think. It have a purpose for it there. There's so many ways to pay a tribute to something, and I think this reflects 100% my feeling towards Photoshop.

This is where I am. I've done everything with the Photoshop over the last, I don't know, 20 years, but I never done something like this. Simple and you know, birthday like. This is it. (happy music)