Three ways to make a layer 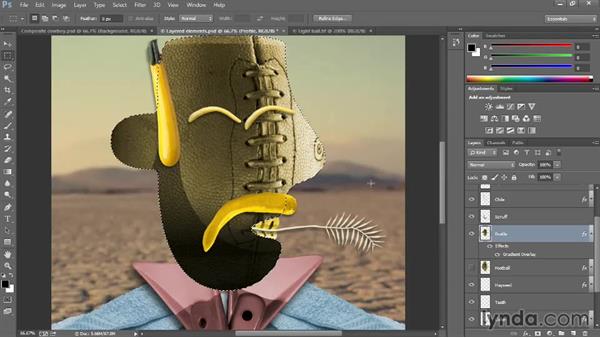 In this movie, I'm going to show you how to create this layer composition, and by layer composition I just mean a multi-layered piece of art work. Now I'm going to be sharing a fair amount of information with you. But my main goal is to convey three ways to create a layer inside Photoshop. There's the Layer Via Copy command which you find under the Layer menu. You go to New and it's this command right here. And it allows you to jump the contents of one layer onto a new layer which is why it has a keyboard shortcut of Ctrl+J here on the PC or Cmd+J on the Mac.

Than, we've got the New Layer command. That you typically find here in a Layers panel Fly Out menu. So notice this little icon in the upper right corner of the Layers panel. If you click on it, right there at the top of the list, is New Layer. And then finally you can Copy and Paste a selection from one image to another. Alright, so I'm going to turn this text layer off, which I can do by scrolling to the bottom of the list, so you can use your Scroll Wheel to scroll up and down inside the Layers panel, when your cursor is hovering over it.

And then you can turn off a layer just by clicking on its eyeball. Now I've created several layers in advance that are currently turned off. To turn them on, you click in front of the layer name. For example, I just clicked in front of Towels. You can also turn on multiple layers at a time by clicking and dragging up the list. So for now, if you're working along with me, go ahead and turn on all the layers from Towels up to Chili. Then, I'm going to scroll up to this layer called Football here, and I'm going to turn it on as well.

Now, there's a couple of problems with this layer. I want this football texture to be in the shape of the cowboy's face, and currently, of course, it's not. It's also covering up a bunch of other elements in the composition. So, for starters, I'm going to grab the Football and drag it down between Scruff and Hayseed. You'll see that thick horizontal bar. When you do, go ahead and drop it into place like so. Now we need to load a selection that I've created in advance.

So notice, if I were to just draw a selection outline with my Rectangular Marquee tool, I could then go up to the Select menu and choose Save Selection. And that will save the selection as part of your image file that you can recall later, using the Load Selection command. So you probably do this with something more complicated than a rectangle, which is why I did it, so we don't have to draw the selection from scratch. I'll go ahead and press Ctrl+D or Cmd+D on the Mac, to deselect the image.

And then, I'll go up to the Select menu and choose Load Selection. Now, you can get to different selections here in the Channel popup menu. And the one that I want is called Face Outline, so go ahead and select it again if you're working along with me. Invert should be turned off. The Operation should be set to New Selection. Otherwise, everything's fine. Then click OK, and we get this selection outline here. Now we need to send the selection to a new layer. And we'll do that using that Layer Via Copy command, but an easier way to get to it, when the Rectangular Marquee tool is selected as by default, is to right click inside the selection, and then choose this command right there, Layer Via Copy.

And that will pop that selection onto a new layer. Now, you lose the selection outline, but you could always get it back, as I'll show you in just a moment. I'm going to now turn off the Football layer, and I'll double-click on the words Layer 1 in order to rename this layer, and I'll call it Profile, and then press the Enter key, or the Return key on a Mac, in order to accept that change. Now I want to create this yellow stroke around the cowboy's face, which means that I need to regain access to that selection outline, and I'll show you a way to do that.

I'll switch back to Layered Elements. Anytime you want to retrieve the selection outline from a layer all you have to do is right click on its thumb nail and then chose Select Pixels. And now we will go ahead and select the Edge, just as it was selected a moment ago. Now we need to create a new layer using that second technique. Which is, to go to the Layers panel Fly-Out menu in the upper right corner of the panel, and then choose New Layer. And I'll go ahead and call this layer Outline, and click Okay.

Next we want to lift a shade of yellow from the image. And you can do that by using the Eyedropper tool, which is located toward the top of the toolbox. And now I'm going to click on this shade of yellow, in what serves as the eyebrows. And I'm clicking and holding, so you can see that ring. So the bottom of the ring shows the old foreground color. The top of the ring shows the new one, which is a shade of pale yellow. Next you want to go up to the Edit menu and chose the Stroke command. And I came up with a width of 15 pixels, notice there is the color.

The location should be set to Center and all of these other options are set to their defaults. Then click Okay to create that stroke. Alright now we can go up to the Select menu and choose the Deselect command or press Ctrl+D in order to deselect the image. Now the outline's not quite in the right position. It needs to be in front of the Scruff layer, so just go ahead and drag it up one layer here inside the stack. Now I'm going to scroll up the list to the Eyes layer and turn it on, and as you can see, it's a pool ball.

Go ahead and click on that layer to select it. Now, we've got one eye, but we don't have the other. Now you might figure the thing to do is to duplicate this layer, but notice that the eight is serving as the pupil. So if I were to duplicate the pool ball then the eye on the right would be looking in the wrong direction. So I've got this other file open here, and I've saved a selection along with it as well. You can load it by going to the Select menu and choosing the Load Selection command. And the Channel we want this time is Circle, so make sure that's selected and then click OK.

And you'll end up with this selection right here. I'm going to switch back to the Rectangular Marquee tool so I stop seeing the eyedropper cursor. And then, we'll take advantage of the third method for creating a new layer, which is to go up to the Edit menu, and choose the Copy command. Or you can just press Ctrl+C, or Cmd+C on a Mac. Then I'll switch back to my composition in progress. I want to register my new eight ball to the old one, so that they're ultimately exactly aligned with each other. If you want to specify a location at which to paste an image, then, you need a selection, and so I'm going to load the selection for the eyes layer by right clicking on its thumbnail and then choosing Select Pixels and I'll end up with this selection right there.

And then if I go up to the Edit menu and choose the Paste command or press Ctrl+V or Cmd+V on the Mac, then I paste that eight ball into the exact same position. Now, I'll go ahead and switch to my Move tool at the top of the toolbox, and I'll drag this eight ball while pressing the Shift key, over to the right hand side. And most likely it's going to snap into place, like so. Now, notice that the eyes have special attributes associated with them. There's some blending settings.

We've got some layer effects. I'm going to be explaining how these kinds of features work in a future movie. But, let's say that you want to lift those attributes and apply them to the new line. Well, that happens when you merge two layers together. So I'm going to merge my New Layer with the existing Eyes by making sure that it's selected, as it is. And then I'll go up to the Layer menu and go all the way down to one of the last commands, Merge Down, in order to merge the two layers into one.

And Photoshop goes ahead and assigns the attributes that were being used by the lower layer, including the layer's name, Eyes. Alright, we have just a couple more layers to turn on here, the head band layer and then finally, the hat, in order to produce the final effect. So if nothing else, you now know about three different ways to create layers inside of Photoshop. Layer Via Copy to jump a selection from one layer to another. The New Layer command to create a new empty layer and finally, you can copy a selection from one image and paste it as a new layer into another.