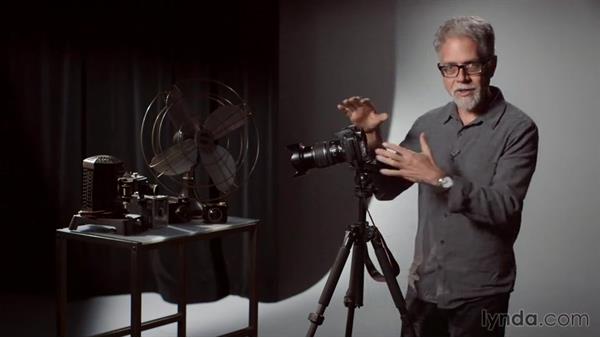 - We're now going to take a quick trip into basic exposure control. This is stuff you may already know from my Foundations of Photography Exposure course, but it never hurts to review. These days almost all cameras, including many cell phone cameras, offer an exposure compensation control. It allows you to specify that you want a certain amount of over or under exposure beyond or below what the camera's metering has decided on. How it achieves that change is dependent on the mode that you're shooting in. I'm shooting this old projector, and I've decided that I want some overexposure to bring out some of the shadow detail in here.

I'm working in aperture priority mode, because I want depth of field control, I want some shallow depth of field. If I dial in positive exposure compensation, and I'm dialing in plus one stop of exposure compensation right now, the camera will still choose a shutter speed for me. That's how aperture priority mode works. But now it will choose a shutter speed that will yield an exposure that's one stop brighter than what the camera's baseline correct assessment of the scene is. And with that simple change, (shutter click) I have achieved a brighter image.

One that still has the aperture that I wanted for the depth of field that I wanted. Obviously to go darker, I would dial in negative exposure compensation. Most exposure compensation controls allow third stop increments, so if one stop is too much overexposure, I could back off to 2/3 of a stop or 1/3 of a stop. If one stop is not enough overexposure, I could go up to 1 1/3 or higher. On this camera, I can go all the way to three stops in either direction. In shutter priority mode, the camera achieves it's compensation change by altering aperture.

That's the opposite of what I'm doing right now. I'm in aperture priority mode, so it's changing shutter speed. So that allows me to maintain the shutter speed choice that I want if I need that level of control. There might be times when the camera can't get the settings that work, though. For example, perhaps I'm in shutter priority mode, working at a quarter of a second, because I want a blur motion. If I'm in bright daylight, and need some negative exposure compensation to darken the scene, if the camera has already chosen an aperture that's very small, when I dial in that negative exposure compensation, the camera may not be able to close the aperture down any further.

It'll still take a picture, but at times when it can't achieve the full compensation that you're asking for, it will usually indicate that somehow in the viewfinder. In this case it might flash the aperture readout to indicate that it thinks exposure is invalid. Again, the camera will still take a picture, it's just letting you know that you're not getting the full exposure compensation situation that you asked for. If you have ISO set to Auto, the camera will be able to make alterations to ISO in addition to shutter speed or aperture to achieve the over or under exposure that you want.

In Program Mode, the camera will perform over or under exposure by altering shutter speed or aperture, or sometimes both. And if ISO is set to Auto, then it might throw in some ISO adjustment as well. As I mentioned earlier, it will strive to maintain a shutter speed that's quick enough for handheld shooting, and it will aim to keep ISO as low as possible to minimize noise. You can think of exposure compensation simply as a brighten and darken control. If I take an image and it's too dark, I can dial in positive exposure compensation and my picture will get brighter. Dial in negative exposure compensation, and my picture will get darker.

In most cases, exposure compensation is the easiest way to alter your exposure, while maintaining the aperture or shutter speed control that you want. However, there will be rare occasions when exposure compensation won't work for you. And in those instances, you'll need to turn to full manual control.

5/1/2015
This in-depth exploration of exposure and dynamic range will help you understand how digital cameras capture images—and enable you to better deal with tricky lighting scenarios. Photographer and teacher Ben Long shows how to balance the three key parameters that dictate how your camera records light: aperture, ISO, and shutter speed. He'll review exactly what "good" exposure means and where dynamic range comes into play, and explain how you can manipulate exposure using in-camera aids such as Auto ISO and metering modes, and with post-processing software like Photoshop. These techniques will help you understand how your camera "sees" and give you more technical and creative options when shooting.
Topics include: