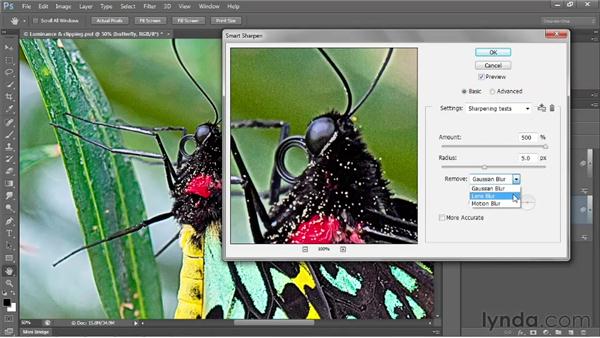 All right! Our bug is starting to look like an oversharpened mask, but he is going to look great by the end of this movie in which I show you why it's often preferable when working with digital photographs to adjust the Remove setting. But first, notice that now that we have a couple of layers going on here. These white filter masks are starting to clutter up the panel. Now, their purpose is to allow you to brush a filtering effect away. For example, if I clicked inside this lower white thumbnail, and I switched over to the Brush tool, then I'll press the right bracket key a few times in order to make it larger, and you can see that my foreground and background colors are white and black respectively. I want them to be the opposite.

So, I'll press the X key, and now my foreground color is black, and that means I can paint away the filtering if I like, which I might find helpful where the really big halos are concerned--for example, those along the feelers, they're pretty bad--but we're better off just fixing those halos. So I'm going to get rid of my Filter Mask by right-clicking on the thumbnail and choosing Delete Filter Mask. I'll do the same for the other one as well, just reduce some clutter here. And by the way, it's not like the filter mask is permanently lost, you can always right-click on the words Smart Filters and choose Add Filter Mask to bring back a new one.

Anyway, I'm going to press the Escape key here, and zoom out to the 50% view size. We do have a problem with the halos around these feelers. So, let's go ahead and fix that by double-clicking on Smart Sharpen once again. And bear in mind, once we're back in the Smart Sharpen dialog box, the preview changes out here in the image window to its standard opaque version. So, in other words, we're seeing the full 500% amount at this point. I'm going to switch Remove, by the way, from Gaussian Blur to Lens Blur. Now, you may wonder what in the world is going on here.

Obviously, we're not removing Gaussian Blur, because we never added it in the first place, and we're not reducing Lens Blur or Motion Blur either, which are other filters that Photoshop offers. What we're really doing is using the power of those filters to sharpen the image. So part of what's going on under the hood here is Photoshop is creating those halos by blurring the image, and it's doing so using Gaussian Blur. We could be creating those halos using Lens Blur instead, and that turns out to be a better idea when you're working specifically with digital photographs.

Gaussian Blur often works better for scanned photographs or artwork that has been downsampled. However, Lens Blur, if you're just looking in a standard digital photo, it's the way to go. And notice that our halos are going to immediately settle down. Did you see how they dissipated a little bit there? They're still pretty harsh over here in the feelers. So let's go ahead and take that Radius value down to about twice as much as we would have used with Gaussian Blur. And you may recall that was 1.5 pixels, so I'm going to take the Radius down to 3 pixels this time around.

If you're wondering what's up with Motion Blur, that can be useful for compensating for camera shake, you know, when you move the camera a little bit and blur the image back and forth, and we'll see an example of that later. But for now, these turn out to be what I consider to be the best settings for this particular image--assuming of course that we'll be printing it. I want you to watch something here. Notice that he is still looking pretty over-sharpened. We can see those halos around the feelers even at the 50% view size. But as soon as I click OK, Photoshop goes ahead and reapplies that 50% Opacity as well as that Luminosity Blend mode, and things settle down considerably, and we have ourselves a very nicely sharpened photograph. And that's how you sharpen a digital photo by changing the Remove setting to Lens Blur.