Setting up the image

Before jumping into an image, take a moment to identify what's going on. Taking into consideration its usage and the photographer's history. I think this image would look so much better with the top of her head finished off. By using our assets, that's looking through the images from the shoot, I found this image here with a very similar pose and the top of the head finished off. So holding down shift, I'm just going to drag this background layer into our select image. By holding down shift and dragging it, it's going to ensure an even drop. So, we can just close this off.

And before we get started, let's just label this Top of Head. It's important to label all of your layers, just to have a better sense of organization. So now, let's drop this layer down to a 50% opacity. By pressing five on your keyboard. And now Cmd+T brings up our Transform. Holding Shift and Option and just pulling from one of the corners, we can get an even pull. So let's just bring this into place. Just zoom out a touch, and we're just going to bring this in, shift it over to line up with the chin to make sure that we have.

It is as close as possible. It's never just going to snap right in. You're always going to have to get it as close as possible. Now, I'm just holding down Shift to move the corner. So I just evenly pull fro one side and it doesn't effect the entire scale. Okay, so just pushing it in, okay. Let's hit Return and see where we are. And a good indication to get yourself lined up, is just to take a look at these eyes, right here. And just push it in like that, and when the catch lights all line up, and the eyes line up.

It's a good indication that you have the right ratio. And like I said, it's never going to just snap right in. It's never going to just be perfect, so we're just going to get it as close as possible and just kind of fudge it in. So hitting zero brings us back up to 100%. Now, by hitting V for the Move tool and then touching this little box right here. This shows me how much of the layer is being hidden beyond the canvas. Now we want to extend up right here at the top of the image, so let's get a guide to mark that.

So Cmd+R brings out our rulers. And just pulling down like this, we can just plop a little guide into place there. Okay, now we'll just turn that off and let's get our Crop tool. Now, when you're using your Crop tool, make sure that you click off right here where it says delete crop pixels. We don't want to lose anything. Now, let's just pull that up, right to our line right there and let's hit Return. Okay, so now we have the image that we need. And now, I'm just going to get rid of that guide. This one's a little distracting.

And we are going to Option, click on the Quick Mask button right there to hide it. Now, we're just going to Cmd+click on the original layer right here, and then Shift+Cmd+I to inverse that selection. And were just going to fill in the top part right here. Shift+Delete, we're set on foreground color. It's a pure white right here. Let's hit OK. And now delete. By doing that, it ensures that we have a solid selection here. That everything is filled in.

Even just the slightest little bit of a hole like that will show up on press as white. So you want to avoid that. And by filling it in like that, we'll ensure that we have everything in there. And now let's get a brush, and let's just start to blend this in a little bit. I have my brush set to, good. Transfer and a Soft brush. That's exactly where I want it because we want to blend right now. Right now I'm just interested in really just kind of breaking this edge and just making sure that we have. That line gone. This tonality is something we'll fix in a little while.

And let's just go in and let's just paint all this in here. And that was actually some good scaling that we did. it looks pretty even. And now, let's just lightly blend it in, just trying to line the hairs up with the hairs that were in the bottom layer. We're just trying to marry these two layers together. There we go. And it's actually lining up pretty good. For every one image that lines up nice like this, you'll have about 15 that don't. Now I'm going to hit X, and I'm just going to go back out a little bit.

I just thought it was a little bit mushy right in there. And I'm hitting X again to reveal, make brush a little bit smaller by using my left bracket key. And just kind of draw in these hairs a little bit. Just trying to retain a sense of this movement, okay. And that does a nice, even blend. I'm really, really happy with the way that this worked out. Let's zoom out now, and you can see that there is a different tonality between the backgrounds.

And we can fix that really easily by Opt+Cmd+M to bring up a adjustment curve, and we're going to clip that to the top of the head layer here, and we just hit OK. And now, let's touch on this hand right here and then use your sampler to click in this spot here. And now, using your down arrow key because we want to add density, we're just going to clip it down a little bit until it starts to match. And, right over here on camera right, it looks like it's blending in nicely.

And right here, on camera left, it looks like we have to do a separate move to blend that in a little bit better. So, let's click right here on the top of here head, and let's hit Q for quick mask, B for brush. Let's get ourselves a nice big brush here. And again, we're still on that soft transfer mode, which is great. And we're just going to eat in a little bit like that, okay. Just hit X and just take a bit off that hair there. Now let's exit quick mass by hitting Q. And we're going to bring up another curve, Option+Cmd+M. And since we're underneath the curve that we have clipped, it's going to automatically clip it to the layer below.

Let me hit OK. Now again, we'll hit that little hand and we'll touch a spot right in here to see where we are. And then using your down arrow key, we're just going to click it down a couple of spots until it starts to blend in. And you can see a little bit of bending up in here. And that happens when you have a very soft mask. And I'll show you how to fix that in just a moment, okay. So let's click OK. Let's hide that away. And now Opt+Click inside of your mask right here. And let's take a zoom in and let's see this.

And do you see these little steps right here? That's what happens every time you use a gradient or you paint a really soft edge like that. And a way to you fix that is to go to Filter>Noise>Add Noise, and it looks like about, yeah, about a two will do it. So, hit OK and let's zoom back out. You have to be particularly aware of that when you have backgrounds like this,0 okay. Now there's still a little bit of an edge right there, but I think that we can just clone stamp that out. So what we're going to do now is we're going to copy this, put it into a layer set.

And that's where we'll be doing our retouching. So before we forget to fix this little tonality over here, let's just zoom in and do that. So using your clone stamp, let's get like a nice big one, you don't want a small one here, because you want to really just go beyond that little line right there. And this is set at a soft brush on Transfer, which is where we want it, and let's change this mode to Normal. Let's just sample right here, and then just click that away. Zoom out, and there we have it. Let's just set this up a little bit further. So let's just do a Cmd+A for a Select All, and we're just going to make an adjustment curve, Opt+Cmd+M.

Let's hit OK. Now, let's go right up here to Image > Canvass Size. And, make sure that Relative is clicked down here. And, we're just going to type in a one inch and a one inch. Make sure you're set to inches right here. And, that's going to give us a one inch border around the image, which is actually half an inch on each side. Let's hit OK. Now, go into this Curves Adjustment layer we made. Just Cmd+click to get a selection. And now, Shift+Cmd inverses the selection.

And go right down here to this little half moon and pick Solid Color and then bring it up to this top left which will give you a pure white. Let me hit OK. And then we're going to label this Trim. And that's going to set us up with that nice white border around the image. Just throw that curve away because we don't need it, and now we can get into the retouching. 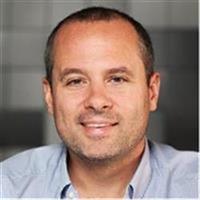 11/25/2013
Hair can be difficult to manage off camera; sometimes even on-set stylists can't make it look perfect on camera. That job often falls to the retoucher. Learn how to enhance the look of different types and textures of hair, under the guidance of master retoucher Timothy Sexton. He shows you how to use Adobe Photoshop's tools, such as Clone Stamp, to maintain the natural flow and appearance of hair while making it look what the industry deems lux—soft, full, and voluminous. Then Timothy shows you how to bump it up a notch for a look you might see in a typical hair care advertisement, and shows how to style curly hair, thin hair, and men's hair.
Topics include:

Video: Setting up the image