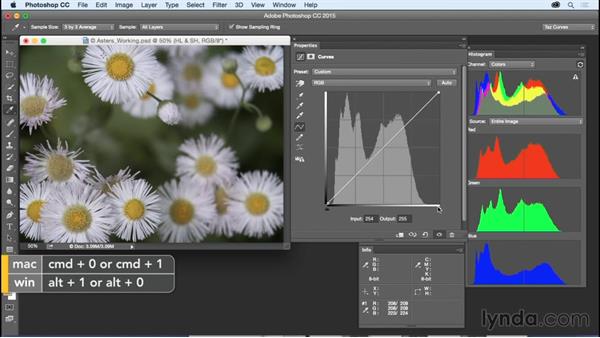 - For our first adjustment we are going to do a visual evaluation and histogram evaluation of our image. Then we're going to use that information that we have to set our highlights and shadows. To get us started, let's adjust our layout a little bit, because we've got limited space to work with here in the video recording window. Let's go ahead and move our "Properties" window over after we create our curved adjustment layer. So, let's go ahead and create our curved adjustment layer, and let's name this, because we know we are going to set highlights and shadows.

We will just abbreviate that "HL" and "SH" for highlights and shadows. And then, we'll move this over here. Just go "command +" or "control +" to increase the dimensions of our image on screen so we can see a little bit easier what we're doing. Alright, let's do our evaluation of the image. Always start with an image evaluation, because that is going to be your guide, both in terms of looking at the content of the image and the histogram. We look at this, we see we've got some nice white highlight areas here, we've got some deep shadows.

Overall, the contrast is a little low, isn't it? You look over here on the histogram and you see, and this is a very common histogram that you will encounter quite a bit. One of the reasons we are using this image here is it is a very common type of adjustment. It is noticeably missing the really bright white highlight end. We've got some quarter tone, the data starts in the quarter tone, but from 100 down to about 85 there really isn't much data. Pretty good shadow. We don't have the deepest shadow in there, but not too bad. So, we see why the contrast is a little bit off, don't we? We also see the image, in terms of contrast, a little bit darker than what we might like overall.

We can see that there's lots and lots of data down here in the shadow end. And not an awful lot up here on the highlight end. You can do some things to encourage the overall brightness and improve the contrast, as we go through. Let's go ahead and set our highlights and shadows, and let's do it numerically. I think that's a good habit to get into. I mean, we could just come in here and just set the highlight and set the shadow, like that, but I'd rather go ahead and do it numerically, that way we know we're going to be right, and we're not going to lose any detail. Let's hold down our "option" key, "alt" in Windows.

What that does is it temporarily activates the "Show Clipping for Black/White Points", so we can see where the lightest and the darkest areas are in our image. So "option" or "alt" and then drag, and we can see right off the bat where the lightest portion of the image is. Looks like, right up here in this flower. We just "shift" and click, and by the way, I always make sure that I'm in the Eyedropper tool when doing this. Just "I" for Eyedropper tool. I should mention, a good place to do this, set your sample size at 3 by 3, don't keep it on Point Sample, which I think is the default.

Set it on 3 by 3, so you're not just measuring one pixel. You really want to measure a range of pixels. And then we'll go "space and command" and we'll zoom in. You can always recheck, holding the "option" key or "alt" key, and then drag this, and you can see where the white portions of the image are. If you need to move the location we had a little bit, hold down the "shift" key and snug this over a little bit, like this. You can move that control point. But always return the slider to here, and then you go "command + 0" or "control + 0", and then "minus" to take that down.

You know, the dimensions of your image can completely be controlled from your keyboard, with "command" or "control", and then zero and one, adding "plus" and "minus". You're probably already familiar with those. Alright, let's do the same thing on the shadow end. Hold down the "option" key, "alt" in Windows, and then drag this over until we see the darkest area. Looks like all over on the righthand side. Hold down the "shift" key, and then click and that places our shadow control point. Of course, what we end up with now is these two color sampler points that we could then monitor as we adjust our image.

Right now, we're going to just focus on tone, but can't help but see that as we go through. Alright, we've got our color sampler points up for the highlight and the shadow. Let's go ahead and click on our Properties and let's drag our highlight down, and while we're doing this, we're watching these values right here. We're watching those values, and then we're going to put this down until the highest value, which in this case is blue, becomes in the low 240's. So it's right at 242, and then the red and the green are at 226.

You're probably thinking it'd be great to get all of them at 242, and that's exactly what we would do if we were going to do a color correction, which we'll do in just a little bit. So by doing this, you'll notice, if we look at the histogram, we might be inclined, if we were just looking at the histogram, to maybe pull this all the way over here. Notice that the blue goes to 255. The red and the green are nice at 239, 240. But the blue gets blown out at 255, so sometimes you end up splitting the difference between the two, trying to get the red and green as high as you can.

And now you see one of the reasons why, if you really want a good brightness and contrast in the color image, you need to do color correction first. But, baby steps here. Walk before we run. And then we'll do the same thing with the shadow point. We'll pull this, while we monitor the number two value here, which is the shadow value. I placed and create my color correction sampler points in tonal value order, where the brightest highlight is one, and the deeper shadow has the largest number, in this case it would be number two. Here, we want to make sure we can put the lowest numbers at 11 or 12, which would be about a 95%.

There we go. Just setting our highlights and our shadows, using a quantitative analysis and making sure that we don't blow out, that is, go to 255, on any one of the values. And along the road we got a chance to talk a little bit about color correction, and also see why it's good to do the color correction first, before you do the tone. Let's take a look at the overall improvement in our image. It's good. It's still not probably what we want it to be, but it's better. Next movie, we're going to do some overall brightness and contrast adjustments, now that we've done the tone.

And then we're going to just stick with tone, for now.