Selecting the best frame of a fish in motion 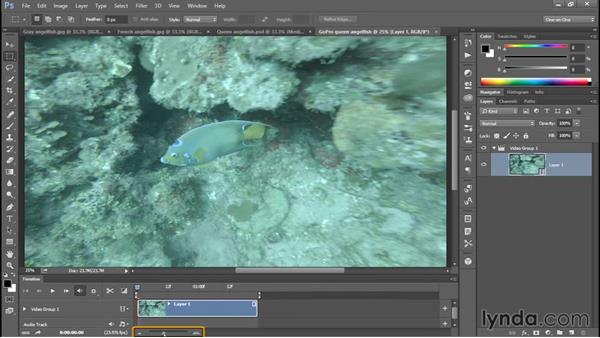 - In this chapter, we're gonna take a look at some of the most beautiful fish in the ocean, angelfish. So here we've got the least colorful of them all, the grey angelfish. It also grows to be the biggest size. And then here we have the classic French angelfish. Now, the thing about angelfish, like a lot of fish in the sea, is they're movers and that's largely because they're not territorial. So you've got territorial fish, like damselfish, for example, that are gonna stand their ground and that makes them a little easier to photograph. But then you have these non-territorial fish that are constantly on the move and they may flirt with you a little bit, but at some point they're gonna dart away.

And you can see in the case of this French angelfish, for example, that I am moving my camera pretty quickly along with the fish and that's why we have these little bits of detritus in the water that are shown in motion. But we're gonna focus our corrective attentions here on this guy, the queen angelfish, which is an extremely color variety of fish. And as you'll see, it's gonna start in pretty rough shape, but we're gonna bring her out nicely. If indeed she's a her. For all I know, he's a him. Now as before, this is a frame from a GoPro movie, so I'm gonna go up to the File menu here inside Photoshop and choose the Open command.

This is typically the easiest way to work. And I'll go ahead and open this file right there, GoPro queen angelfish.mp4 Now these movies, I didn't shoot them this short. I went ahead and trimmed them down inside QuickTime X and that way they're just a little bit more brief for you. Cause what I do when I'm out there is I typically shoot one to three minutes at a time. I'm not shooting my entire dive, by the way, and the reason that can be problematic is because if you run out of room on your memory card, it's very possible that the GoPro will save nothing, as opposed to saving as much as it can.

So that's something you have to watch out for. Alright, I'm gonna close this little tip here. Notice here inside the timeline panel that I'm seeing a big clip. You may be seeing a very teeny one like that, but you can change its size if need be, if you want to, by dragging this slider between the two mountain silhouettes. Now make sure, if you're working along with me, that Enable Timeline Shortcut Keys is turned on and then what we want to do is press the right arrow key to advance from one frame to the next and to really get a sense for what kind of shape these frames are in, you wanna go ahead and zoom in here in Photoshop by pressing "ctrl +" or "cmd +" on a Mac.

Now, for example, this is a great looking frame where the fin and the tale are concerned. They're both spread out nicely. However, if we zoom in a little bit on the face, you can see that it's not in terribly good focus and that's what we really want to see in focus where this image is concerned. Really, frankly, where any nature photograph is concerned. And it turns out that the face comes into better focus right about here, I figure, when the fin is starting to go down.

And so, I happen to be looking at frame 16 and you can see that down here in the lower left corner of the screen. And also notice, by the way, that the tail is starting to move back. Alright, so let's say that's the frame we're looking for. We'll go ahead and zoom out a little bit, not that far maybe, and then I'll press "ctrl A" or "cmd A" on the Mac in order to select the entire image. And I'll press "ctrl + alt + j" or "command option J" in order to not only jump this frame to a new layer, but also bring up the new layer dialogue box so I can go ahead and call this layer "Queen" and then I'll click "OK." And now I'm gonna move the queen layer out of the video group right there, click on the video group to select it and press the backspace key or the delete key on the Mac to get rid of it and then go down here to the Timeline fly out menu and choose delete timeline so that we're no longer working on a video.

We're working on a still image. Then I'll double-click on the Timeline tab in order to hide it. And we now have the base image from which we'll be working. And that, folks, is how you select the best frame of a fish in motion, specifically, a queen angelfish that's only gonna get more beautiful in future movies.

Video: Selecting the best frame of a fish in motion