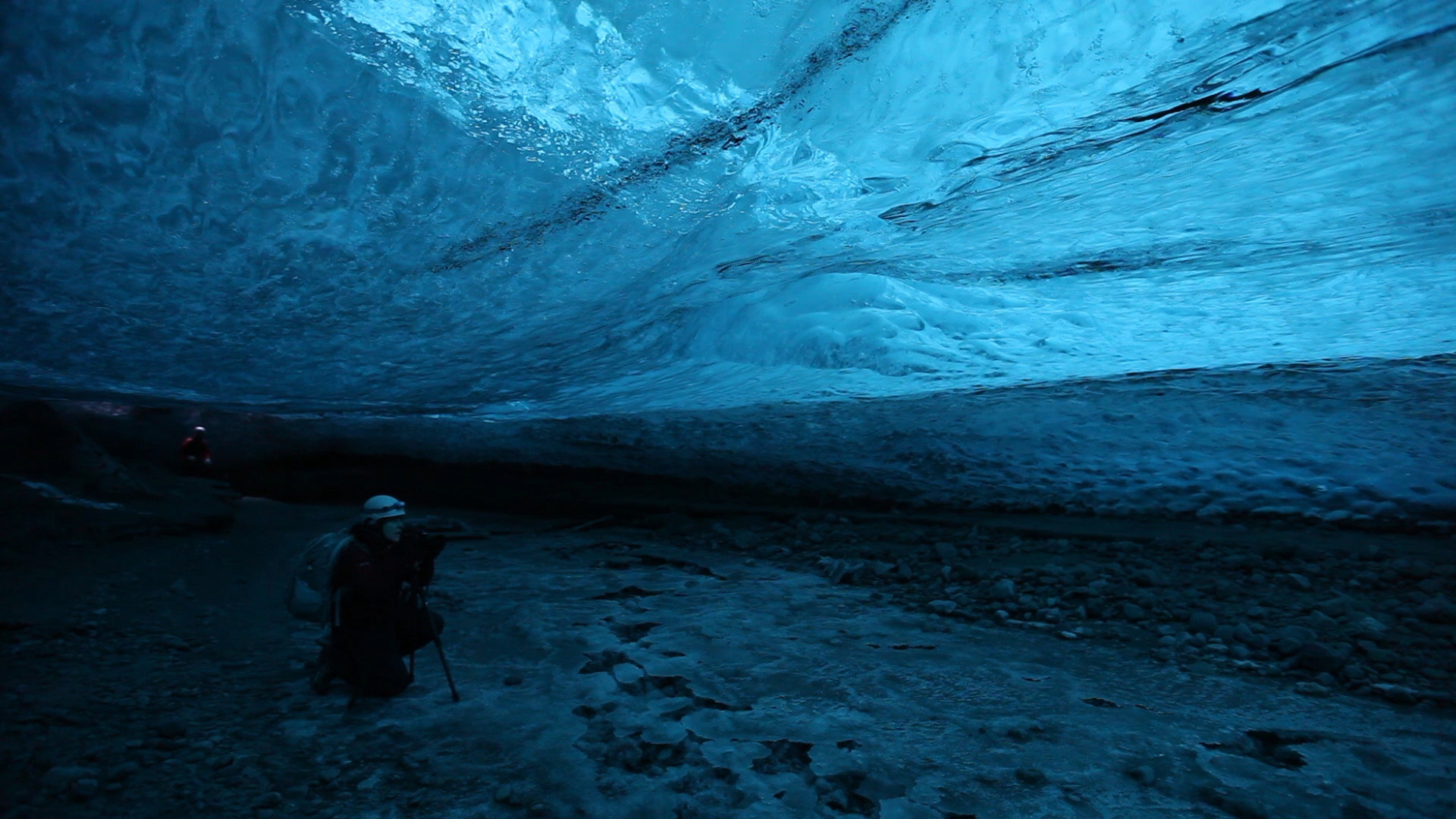 5/13/2015
Landscape and fine art photographer Seán Duggan has long been drawn to Iceland's primal landscape, where great light, ice, and mountains meet. While he loves taking photographs that stand on their own, he also keeps an eye out for shots he can combine into imaginary landscapes, driven by story and metaphor. In this short documentary, we follow Seán from shooting the ice flows and volcanoes of the Icelandic wilderness to compositing into his images into a new creation, "Fire and Ice," using Photoshop. Follow along with the entire process—start to finish—only on lynda.com.

(ethereal music) - As a landscape photographer and a conceptual photographer, and also as a photographer who works with composites, Iceland really draws me because the landscape has this very raw and primal feel to it. You have waterfalls and icebergs and glaciers and mountains and, all combined with just really great light. And I think one of the things that I find intriguing is there's really, comparatively, very few trees in Iceland, so you see the landscape sort of in this bare form, it's very stark.

It really kinda draws me in terms of the possibilities that it offers for crafting these, what I like to call, imaginary landscapes based on the photographs that I generate there. (mellow music) My push for photography really is very much driven by the idea of... Story and metaphor. I shoot a lot of landscapes, I shoot a lot of still lives and I enthusiastically welcome the role that serendipity and accident plays in the creative process.

I typically have a dual mindset when I'm photographing, I am photographing for the single image, but a part of me is always looking for collecting images that I can use in composites. One of the really interesting places there is a place called Jokulsarlon where ice breaks off from the Vatnajokull ice cap, gradually they break up, become smaller, they're washed out to sea, and then they wash back up on this black sand beach. And so every time I've bee there I've been intrigued by the fact that some of the pieces of ice on the beach actually look like land forms like mountains or cliffs, just in and of themselves, made out of ice.

So that intrigued me, and there are many volcanoes in Iceland, a lot of them, most of them are actually under... Glaciers and ice caps. So, I cot the idea of just sort of exploring a conceptual image that would tie these two things together, the idea of fire and ice. Sort of creating a volcano out of... Ice forms. So when I was in Iceland I would review my images after each day, and I'd flag the ones that I thought were interesting, but then when I got back home, I had a little bit more time, obviously, and that's when I went through and really started just trying out ideas.

And I went through several iteration of starting images and getting half way through an image and then deciding, no, this isn't working. But then I finally found sort of the foundation image, you know, the base image that really worked very well on its own as an image, and from there I could build up my scene. The image that I photographed was a horizontal of the, you know, the sort of ice, I call it a crucible, but it's almost like a dish, like a crystalline dish, and it was just balanced on this other piece of ice.

That was horizontal so I knew I wanted a vertical, because it was going to be more of a vertically oriented picture with the smoke rising up, so I extended the sky a little bit from the existing sky, and I brought in sky from another image and blended that together to make it match. Then, I used another piece of, photograph of a piece of ice that was laying down on the beach, it was kind of illuminated a little bit, and I created more of a conical, sort of classic volcano shape, and then I used a layer mask to blend it into the existing piece of ice that's my main foundation image.

Because, I never like to erase anything because I, you know, I never know if I'm gonna need it again. And also, if I'm working fast, establishing a rough proof concept image my initial layer masking may be a little bit sloppy around the edges, but once I see that something's working I'll go back and perfect it. I don't waste time making a super perfect mask right away, I wanna put things together and just sorta see if they're working. If they're working good then I'll go back and put the time into the mask. The next element after adding a volcano shape was to add the smoke, because that started to really tie everything together.

The smoke was created from four or five separate photographs of smoke that I had arranged smoke emitters on top of another piece of ice, that was backlit. And so, I used the quick selection tool to make an initial selection of the smoke plume. That it makes a makes a real rough starter selection, it's definitely not ready for prime time. But the magic is if you go and use the refine selection dialog, you can use the refine radius tool, and that is just such an amazing tool because that's your way of telling Photoshop, "hey, "have another look at this edge here.

"You can do a better job here, just take a real close look "at this edge." And the program goes in and looks at that edge, and it's truly amazing at the really detailed mask that it does for the edge of the smoke. It gets the partial translucency of the smoke, it gets all the individual little, you know, curlicues coming off the edge, and then, click OK on that, copy that selection, bring it into the main composite, adjust them, you know, transform as they need to position they way they need. And I would do further layer masking, usually with a fairly soft edged, big brush, nothing precise to hide the parts that were not the nice beautiful smoke edge.

The day that I photographed that particular smoke emitter on that particular piece ice, the wind was actually blowing, you know, fairly in a sideways direction, so I didn't have smoke kinda coming up nice, it was coming off and blowing this way. So I only had one good edge of smoke that I could use, cause the bottom edge was the rest of the beach, and it was, you know, there was other pieces of ice down there, so, that's the reason I had to use multiple pictures of smoke, so I would get one edge and use that for one side, and then, I could get another one and flip it and use that for the bottom side, and then kinda blend them together with masking.

And it just worked really well, and again, it fit with the lighting that was going on on the rest of the image in terms of the pieces of ice that were backlit. So, what I call the crucible here was sitting on another piece of ice, and I decided to take yet another photograph of ice that was kind of the underneath shelf where there were icicles hanging down, because I wanted to suggest this sort of subterranean quality.

I wanted to suggest, I didn't want to have just the, the smoke coming out of my ice volcano, I wanted to suggest this, a concept of fire a little bit more obviously, so I created that edge, again, just bringing in a new layer and using the layer mask to selectively reveal that edge with the icicles, and as faith would have it the texture of that piece of ice was very similar to the texture of the other piece of ice that I photographed so they blended together very, very well.

The basic composite was coming together, it was looking pretty good, but I wanted to suggest something a little bit more obvious and also create more of a visual hook, or a visual concept of the fire, fire and ice concept. So, what I did was I created a solid color fill layer to set to an orange, orange-red color, I set that to an overlay blend mode, which blended it into the detail very nicely, and then I just created a elliptical selection and turned that into a layer mask.

In the properties panel I used the feather slider to just add a really big feather, which just softened the edge of that elliptical selection, made it look like it was just kind of glow coming up from underneath. It looked pretty good, I actually just duplicated that layer, so I have a double dose of that. The other thing that that brings to the image in addition to, you know, the obvious visual suggestion of fire, is that it creates this very pleasing color contrast with these sort of orangey color of the suggestion of the volcanic interior of the earth with the deep blue of the sky, and the kinda more crystalline blues, and crystalline white colors of the ice.

(mellow music) So this was an idea that I'd had for a while. It came together differently than I had imagined it, which is often the case. You imagine something, it sort of is fully formed in your imagination in a very ambiguous (chuckles), ephemeral way, if that makes sense, but it came together different but now that I've seen it, I'm very pleased with it, I think it works pretty well. I just appreciate compositing for kind of just letting my mind run free and exploring these ideas with just a little bit more flexibility than I could if I went out to try to capture a concept with just one photograph.

And Photoshop is the perfect medium for allowing me to realize those visions. (mellow music)