Rotating a layer with Free Transform 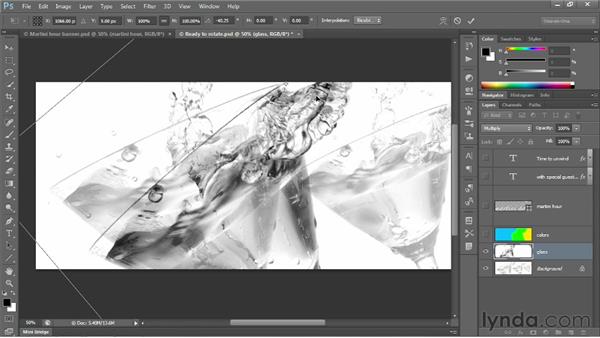 In this movie we'll rotate this big glass layer, so it matches the angle of the largest of the glasses in the background. I am going to go ahead and turn that Glass layer back on, and then I'll go up to the Edit menu and choose Free Transform or press that shortcut Ctrl+T, Command+T on the Mac, and I'm going to zoom out here so that you can see that we are faced with the proposition of a very large bounding box, one that is much taller than the canvas. So you're probably going to have to zoom out a few clicks to gain access to the handles.

Now if you drag a handle you're going to go ahead and scale the image, and you can squish it if you want to, like so. If you want to maintain the proportions then you press the Shift key as you drag a corner handle but you can see here that I'm now maintaining the squished proportions not the original ones. If you want to rotate the image you move your cursor outside the bounding box, and then you drag. And notice that throughout, I get that little heads up display, telling me the skill percentages or in this case the angle.

At this point I've pretty well messed things up very thoroughly here. You do have one level of undo when you're working inside the Free Transform mode. So I'll press Ctrl+Z, or Command+Z on the Mac, to take advantage of it, but I can't restore the size by undoing. So instead I'll go up here to the Options bar, turn on the Chain icon, which suddenly restores the original proportions, and then I'll click on the W in order to select that width value, and I'll change the size to 100%. So I don't want to scale this image at all, but I do want to go ahead and rotate it, so I'm going to drag outside of the bounding box in order to do that, but now it dawns on me, as is so often the case, that I can't see what in the world I'm trying to match.

So I can't see any context where this rotation is concerned because after all the image is opaque. And that's a kind of thing that often times sends you pressing the Escape key because after all if you press the '5' key at this point you do not reduce the opacity to 50%. However, you can reduce the opacity on-the-fly manually here inside the layers panel. Notice all three blending options are available to us. So I could take this Opacity level down, for example, to 50% if I wanted to but that's not what I want to do.

Instead, I want to just drop out the whites, so I'm going to switch the Blend mode to multiply which treats white as invisible. Now I'm going to drag the image so that the top-right corner of the glass that I'm working on meets up with the top right corner of the glass and the template, and then I'll take this little target, and move it to that location, and this target represents the center of the rotation or if you will, the transformation origin. Now move your cursor outside the bounding box and drag, and you'll see that Photoshop goes ahead and rotates the glass around that point.

Not to give things away but we're looking for an angle value of -24.0 degrees, and you can see it in that heads up display. Even though it shows up it's 23.99 up here in the Options bar, I'm going to go ahead and change it to -24, and then I'll press the Enter key to accept that value, but before you press the Enter key again to apply the rotation, you want to check the Interpolation setting. So I'm going to click on what is currently the word Bicubic, and switch it from Bicubic automatic to just regular, good old Bicubic because we don't want to be heaping on incremental damage, and then I'll press the Enter key, or the Return key on the Mac, in order to apply that change.

Now let's zoom in on the image to 100% and see if we've got things lined up. It looks pretty good for me but if you need to nudge your layer around a little bit then you press and hold the Ctrl key, or the Command key on a Mac, which gets you that Move tool on-the-fly, and then you press the arrow key in order to nudge that layer around, and I've completely nudged it out of alignment, was looking pretty good there for a second until I made a mess of things but I just wanted to show you how it works. At some point you should see everything just kind of fuse in the place.

And what you need to do, you might want to go ahead and switch from Multiply back to Normal so that you're seeing just the image that you're working on and nothing more, and then turn it off, and then turn it back on, and in my case, I saw a little bit of movement I think, so I'll nudge it again, and then turn it off and back on. It's little high just trying to show you how you can get things exactly aligned if you want to, and then I'll turn it off, turn it back on, and it looks like we have alignment. I don't know, looks fine. Anyway I'm going to switch that Blend mode back, however, from Normal to Multiply because, after all, let me show you why here.

I'll go ahead and press Shift+Tab in order to hide the right side panels, and then press Ctrl+ 0 to zoom out. And notice that this image is so huge that it covers just about every shred of the template here, so it's covering the other two glasses, and it's going to be in front of the other two glasses covering them up as well after we create them. So press Shift+Tab to bring back those panels. We want the Blend mode to long-term be set to Multiply, so go ahead and switch it, like so, and we'll be able to see the image and the template at the same time. And that, folks, is how you rotate a layer with absolute authority here inside Photoshop.