Placing the arch in the scene 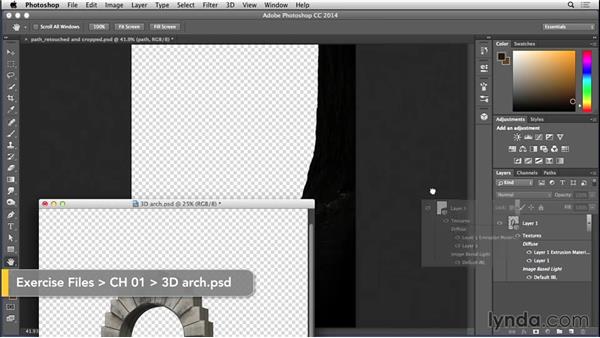 Join Bert Monroy for an in-depth discussion in this video Placing the arch in the scene, part of Creating Dreamscapes in Photoshop: Arch to Somewhere Else.

So now let's take the arch and put it into the scene. Still gotta do a few things to this foreground. First thing we're going to do is do a little flip horizontal on it. Transform, and Flip Horizontal. This is the direction we want everything to be happening in. Okay, so now, what we're going to do is I'm going to go into my Adjustments, and go into Hue Saturation, where I'm going to bring down the saturation quite a bit. Bring it down, about like that. And bring down the lightness. This has to become a little darker. Just like so. First I gotta think about a few things.

There's going to be some light emitted from this whole thing. So, let's cancel that. And we got this. Let's duplicate that layer. So we have two them. Okay? And we're going to call this one on top, right here, we're going to call it the Path. And that's the one we're going to go in, in the Adjustments, Hugh Saturation. Bring down that saturation and make it darker. It starts to look a little more ominous. Just like that. Now, we can take it even further by taking our Burn tool.

Make sure we got a nice, big brush, maybe not that big. But we'll go in there and let's just pull back just a little bit. So we can see everything, and we just kind of darken this edge here. We'll set it up for Shadows. And we just kind of darken these foreground areas just a little more, just to start adding a little more of a sense of what this thing's starting to look like. There we go. So we have this starting to happen, right in there like that. Really nice and dark. Now that we have that in place, let's get our 3D arch, and we take that arch and throw it right into our scene right there.

It is now just pixels. So I can now put it behind the path, there it is in place behind the path. Now, there's a little shadow that it cast, I could have turned that shadow off. But it's okay, it's a very simple shadow. Doesn't take up much room, so what I'm going to do is I'm just go in there and select it and dump it, hit Delete. Makes it real easy. Okay, so there's my archway. Which I'm going to give it a little bit of a size adjustment here. Let's shrink it down a little bit. And maybe tilt it back just a little bit, there, because it's kind of of looking at up at it.

We're down here, down this path and we're looking up at this huge arch up there. Click OK. And there you see that now we have the arch in place in front of this nice path that's leading up to it. Now, in the next movie what we're going to do is create the background right behind this arch so that we set up the entire mood of the world that this arch is sitting in. And then, we're going to create the world through the arch. That's going to add all kinds of changes to the foreground. But, right now, the next movie we'll go to the background.

9/9/2014
This dreamscape takes you to a place that's neither here nor there: it's somewhere else! It all starts with a 3D arch and a few ordinary images. Bert Monroy transforms these assets into an extraordinary piece of artwork with some retouching and transformations in Photoshop. Find out how to create your own portal of the imagination in this installment of Bert's Dreamscapes series.

Video: Placing the arch in the scene