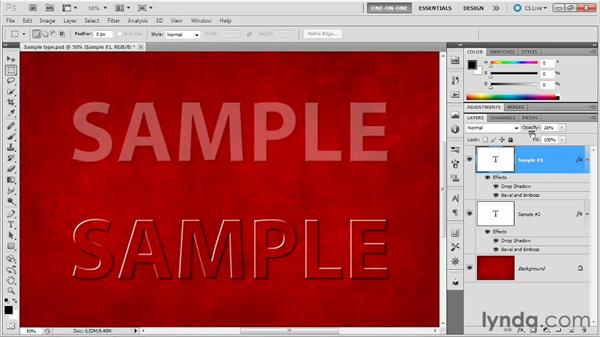 In this exercise, I'll explain the difference between the two numerical blending options here inside the Layers panel, the first of which goes by the name Opacity and the second of which is called Fill, short for Fill Opacity. I'm working inside a file called Sample type.psd found inside the 01_intro folder. And notice that we have two identical words set in the font Myriad Pro, both of which are located on independent layers. I'm going to start things off by making the top layer active, then I'll click on the word Opacity in order to highlight its value there in the Layers panel, and I'll change the value to 25%.

Then I'll click on Sample #2 in order to make it active, click on the Fill this time in order to make its value active, and change it to 25%. And you'll notice that both effects are absolutely identical to each other. And that thrills a lot of people because after all, why have two values that serve exactly the same purpose. Well, the problem with the demonstration so far is that all we have to work with is Fill that is the pixels inside of the layer. And both Opacity and Fill affect those pixels at least where the Normal and most of the other blend modes are concerned in exactly the same way.

Where they start to become different than each other is when we have layer effects. So I'm going to go up to the File menu and choose the Revert command or press the F12 key in order to restore the original version of the image. Notice that both of these layers have layer effects associated with them. I'll go ahead and turn those layer effects on like so and then I'll select the top text layer, click on Opacity, and once again change that value to 25%, and notice that the interior of the type as well as the layer effects fade in kind.

Compare that to what happens when I select the second text layer, click on its Fill value and change it to 25%. And notice this time we reduced the Opacity of the letters that is the white inside of the letters, but the layer effects remain as opaque as they ever were. And where this becomes really useful is when you take that Fill value and reduce it all the way down to 0% which is when you have layer effect and nothing more. So the letters themselves entirely disappear and as a result, they appear to be embossed into that background.

Now a few things you should know about modifying these values. If I click on the top text layer, as we've seen, you can change the value by clicking on it and then entering another value. You can also click on this right- pointing arrowhead to bring up a little slider bar like so, or if you want to, you can scrub directly on the value in order to change it on the fly. If you want to change the value in larger increments, specifically increments of 10, then you press the Shift key while scrubbing on that value and each pixels worth of scrub at this point will result in a 10% variation.

And then, finally assuming that any tool in the toolbox except for this second group of tools right here, the Paint and Edit Tools, anything else including the Selection Tools or the Pen Tool all the way down to the Zoom Tool in the latter half of the toolbox, when any of those tools is selected, you can just press a number key on the keyboard. So for example, if you press the 1 key, you'll reduce the Opacity to 10%. If you press 2, you'll get 20%, 3 for 30%, all the way up to 0 for 100%. If you press two keys in order such as 4, 5, then you'll end up changing the value to in this case 45% and so forth.

The lowest you can go there for is 0, 1 for 1% opacity. If you want 0% opacity, you're going to have to either scrub it down or enter that value and so on. All right! I'm going to press the 0 key in order to restore an Opacity value of 100%. The same goes for the Fill value incidentally. So if I click on that second type layer, then I can go ahead and for example, scrub that value upward or I could press the Shift key and scrub it all the way up to 100%. If you want to change the value on the fly when any tool but that second group of tools is selected, then you press Shift along with a number key.

And that's how you work with the Opacity and Fill values here inside Photoshop's Layers panel.

11/28/2011
Advanced Blending is the second installment in Deke McClelland's series on making photorealistic compositions in Photoshop. The course explores blending options and shows how to use them to create sophisticated effects and seamless compositions, often without masking. Beginning with the basics of blending layered images, the course sheds light on the formulas behind the Photoshop blend modes and shows how to comp scanned line art, create double-exposure effects, correct skin tones, and work with the luminance sliders.
Topics include: