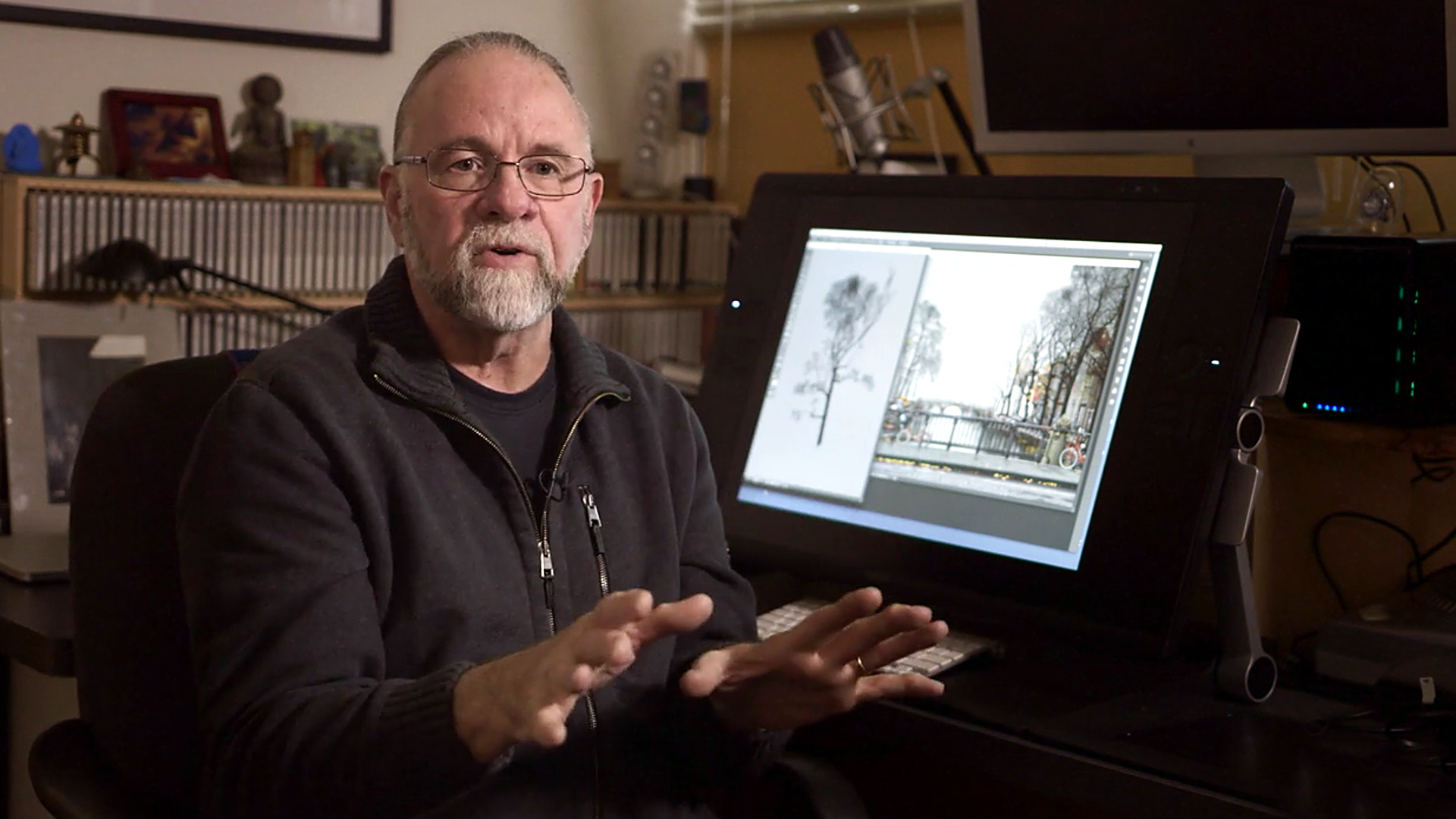 7/15/2015
On the eve of Photoshop's 25th anniversary, we asked early adopters and pioneering artists to tell us their Photoshop stories. While some people think of Photoshop primarily as a photo tool, hyperrealist painter Bert Monroy uses its brushes, pencils, and other painting tools to create art that goes beyond what the camera can see. He explains how his diligent research and attention to detail give every element of his paintings a story to tell.

(calming music) - I'm Bert Monroy and we're here in my studio in Berkeley, California. For me, digital all started back in 1984. I had a small ad agency in New York City and my partner said that we had to computerize. So I was a little skeptical, but I went down to the computer store and I saw this little MAC 128 and it had a little thing called MacPaint.

So I drew a little box, that's cool. I was able to select the box and move it. And then I accidentally went into what later was called fat bits, which allowed me to zoom in, and that clicked. That's when I said this was the future. Now, what I do is, primarily, I'm a painter. I paint digitally, I paint in the computer. It is called Photoshop, it's not called "Paintingshop," but if you really look at the panels there are no cameras in there. There's no camera in Photoshop. There is a paint brush, there's an eraser, there's a pencil.

There's other tools that are related to painting and drawing, and those are the tools that I use. Those are the tools that allow me to paint in Photoshop. I'm not a photo realist, photo realism is a genre, which I don't really fall into. My goal is to put somebody in that place, to have them be there and experience it as if they were actually there. Wherever their eye looks, that'll come into focus, whether it's a building ten miles down the road or that bolt right on the ground right in front of you, everything comes into focus.

So that's my work, it's hyper real because of the fact that it's like being there. So it's beyond what the camera can capture, it's what your eye can capture. The stuff that I like to do is urban scenes. Why, because I was born and raised in New York City. I really feel the streets of the city, and I don't like really clean buildings. I like buildings that have been around for a while, that show that rust, that the paint is peeling because they've seen it all and that's what I like to capture. The piece I'm creating now is a little canal in Amsterdam.

The photograph, which was the original inspiration for the painting, is limited in many ways. One, is the fact that it was foggy and being a photograph there's that depth of field problem, okay. There's that lantern in that building. You know it's a lantern because it's lit. But what does it look like? You can't tell any detail. But the beauty was Google Maps, the street view. I was walking down the streets in Amsterdam, I was spending days in Amsterdam walking up and down the streets digitally, and taking the photograph. Here's that lamp, I would zoom into it.

Here's that brick texture, how are these bricks different from the bricks next door? I can see them by studying them online. So I was able to get all the detail of everything from a doorknob to a flag to whatever by going online and doing all my research there. I'm a very visual person, I like to see things and I always look at everything and I was always amazed at how beautiful the city is, but people don't look. There's beautiful, ornate corners. Do you ever see it? No, I never noticed that before. I do, I look at these things.

I get the basic shapes there, but everything else is pretty much made up. All of the grime, I put it there. Why, because I just feel it gives it a little more life, it gives it a sense of where it is by adding that little drip of dirt. It's seen something, it's been there. And when you're there you're experiencing life and its wear and tear on things, and that's what I try to capture, is to give everything a story to tell. And it's a labor of love and that's basically what it is.