Moving an object in 3D space 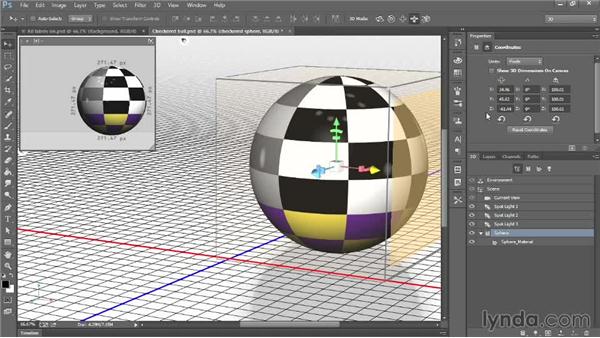 Join Deke McClelland for an in-depth discussion in this video Moving an object in 3D space, part of Introducing Photoshop: 3D.

In this movie, I'll show you how to move an object in 3D space, according to the rules that I showed you in the previous movie. I'll go ahead and switch over to this image that contains the 3D sphere. I'll click on that 3D layer, here inside the layers panel. And then I'll switch to the Move tool at the top of the toolbox so that I can see all of my 3D options. Now, to select the sphere, I'll click on it. At which point I'll see the sphere surrounded by a 3D bounding box and I'll also see this red, green and blue 3D widget.

And you may recall from the previous chapter, that you can scale the widget either by shift dragging downward to make it smaller, or shift dragging upward to make it larger. But about this size is going to work fine for me. I also want you to see here inside the 3D panel that the sphere is now selected. Now incidentally, just in case you can't see everything inside of your scene, listed here in the 3D panel, it's because one of these icons is selected up here at the top.

For example, if I click on Filter By Lights, I'll only see my three spotlights and nothing else. In order to see everything, you need to click on the very first icon,Filter by Whole Scene, and that will show you the lights, the camera, and the object itself. Now notice that every axis associated with this widget ends in a cone. And these cones allow you to move the object along a specific axis. And to see what that means, I'm going to go over here to the Properties panel and click on the second icon coordinates, in order to see the numerical coordinates associated with the sphere.

These first values right here are the position values as you can see if you hover over any one of them. Notice the X position, Y position, and Z position. The second column represents the rotation values, as we'll see in the next movie and then, the third column represents the scale values. How large the object is. At this point we have X and Z values of 0 and a Y value of 50. Which sets this sphere directly on top of the ground plane. But let's say we want to move the sphere to a different position.

Then I could drag on this red cone for example, in order to move the sphere along the x axis and notice because I dragged forward on the cone, I end up with this positive X value. If I change that value to a negative value like so, I'm going to move the object to the left as opposed to the right. Now notice my cursor. It's become what I call a ghostbuster's cursor because it has a slash through it. And it's telling me that I can't use my cursor here inside the image window.

If you run into this, it's because the value is still highlighted. All you have to do is press the Enter key, or the Return key on a Mac, and then you will once again have the option of dragging the sphere around here inside the image window. If I drag up on the green cone, I'm going to lift the sphere and I'll end up with a positive y value. If I drag very far down, like so, on that cone, then I'll move the sphere below the ground plane, as you can see right here and I"ll end up with a negative Y value.

But I'll go ahead and move that guy back up by getting rid of the minus sign and pressing the Enter key, or the Return key on the Mac. And then finally, if you drag forward on the blue cone, you end up with a positive Z value. And if you drag backward like so, to behind the red Y axis, then you end up with a negative C value. You also have the option of dragging on one of the faces of this bounding box. So for example if I drag on this front face, notice that it's telling me move on X axis then I will move the sphere along the X axis.

If I drag on the top or bottom face, I will move it along the y-axis. And if I drag along the forward face, which says, move on Z-axis, then I will do exactly that. Now let's say I want to go ahead and reset my values here. Well, I can click on the Reset Coordinates button, but if I do that, I'm going to reset all the coordinates. Not only the position coordinates right here, but also the rotation coordinates and the scale values. Notice that all the scale values are currently right at 100, whereas if I click Reset Coordinates, they leap up to more than 5900 like so, at which point we end up inside of the sphere.

Obviously I dont want that, so I'll press Control Z or Command Z on the Mac to undo that change. And I'll click on the coordinates icon once again here inside the Properties panel. If you want to reset just a single column, then you click on the icon at the bottom of that column. And for example, if I click on this very first one, it resets the position to 0, 0, 0, which centers the sphere at the intersection of all three of the axes. And that ends up bisecting the ground plane.

Now generally speaking, you want your object to rest on top of the ground plane, which is something Photoshop will do automatically for you, when you go to the 3D menu, and choose Move Object to Ground Plane. And notice that the object is now resting exactly where it should be. And we end up with x and z values of 0, and a y value of 50.01, in my case anyway, which is what Photoshop deems to be necessary for this sphere to exactly rest on top of the ground plane.

Now you may notice that we're not seeing the shadows and, the shadows and reflections have a habit of appearing and disappearing as you work inside of a 3D image. To make the shadow reappear, all you need to do is render the seam for just a few seconds. So I'll start by clicking on the Render button at the bottom of the Properties Panel or you can click on the one at the bottom of the 3D panel and notice within just a few seconds we see where the shadow's going to be. Now it's going to appear very noisy, but that's just fine for our purposes.

All we need to do is just rough things in at which point you can then cancel the ray tracing by pressing the Escape key. And this is something that you're going to do on a very regular basis 'because you're going to want to check on the quality of your shadows and highlights every so often. So all you have to do, is click once again on that Render button which now reads Resume Render. So it takes up where it last left off and then, once you get sick of waiting for it, so you could let it go for about a minute if you want to, or as I say just a few seconds.

Then go ahead and press the Escape key, in order to continue working inside Photoshop because otherwise, ray tracing locks Photoshop up. There's nothing else you can do with the program while the ray trace is running, whereas, once you go ahead and escape, you will still see those shadows that Photoshop came up with. So it'll go ahead and show you the results of the last ray tracing you applied. And then, if you want all the 3D stuff to just go away on screen, all you have to do is switch away from the Move Tool. So if you just switch back to the rectangular marquee tool, then you'll see your 3D object along with its highlights and shadows and reflection without any interface folder roll getting in your way.

And that friends is how you move an object in 3D space here inside Photoshop.

6/11/2014
When it comes to Photoshop, 3D doesn't require a special pair of glasses, NURBS curves, or subdivision surfaces. In fact, Deke shows how, using the Photoshop skills you have now, you can quickly create 3D objects that look like the real thing, complete with volume, shading, and perspective. This introduction guides you through 3D in Photoshop in the shortest time possible. Deke shows you how to model forms, wrap them with color and surface textures, hang lights in your scene, and add cameras—the windows into your 3D world. Plus, learn how to create 3D type and extrude path outlines so they have the appearance of depth. Get started now on a series of eye-popping 3D projects that will help you get to know Photoshop in a whole new way.